An Outsider's Guide To Who You Should Root For: Texas or OU

Share All sharing options for: An Outsider's Guide To Who You Should Root For: Texas or OU 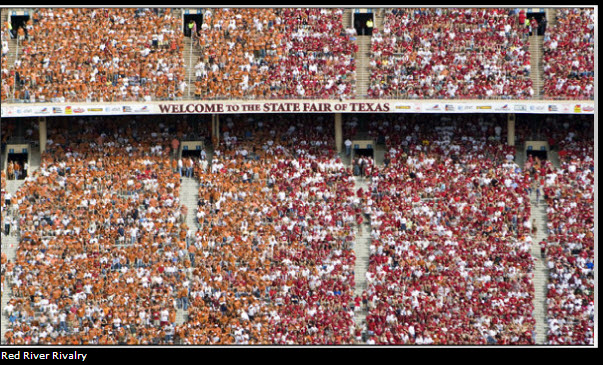 It's here again... the weekend where Texas and Oklahoma play each other every year, at the backdrop of the Texas State Fair. One of these years, I will make it down there for it. But the problem is, if you aren't a Longhorn or Sooner fan... who should you root for in the best rivalry in America?

note: Oklahoma State and Texas A&M fans should just disregard this and continue to hate blindly.

More Likeable Coach:: Mack Brown is the quintessential Southern gentleman, but he also has the cockiness of Texas permeating his soul. The combination of the two has caused him to be able to offer you a sweet tea while backhandedly complimenting your team. Bob Stoops on the other hand, is your All-American douchebag, though most of it isn't his fault. One cannot spend 4 years playing at Kinnick without having Hawkeye idiocy rub off on him. The presence of a visor and the repeated blowouts of helpless teams make him the loser here.

QB That Looks Less Likely To Be Driving a Free Candy Van: While Case McCoy puts up competition, Landry Jones will continue to win? lose? this category until the end of time. Refer to this image as proof. 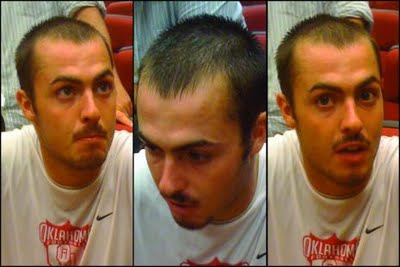 Stadiums: Darrell K Royal Memorial Stadium, named after a great coach.. but possibly racist (according the The Express, sort of.) Maybe it was the BoR rather than him that was opposed to integration, but I'll let Texas fan educate me on that. I really don't like racists, but then you realize that OU's stadium is called Gaylord Memorial Stadium, and it was a feature spot of the Black Eyed Peas 2009 tour. Guess who's not gonna have a good night?

Who Embarrassed Iowa State More:: Brian Bosworth once famously paid some kid at Jack Trice Stadium to get him hot dogs in the 3rd quarter of some blowout, resulting in him eating hot dogs on the bench DURING A GAME. Colt McCoy, then an unknown quantity, decided to play with us in his first game, making himself look like the second coming of.. well.. Vince Young, scrambling around and hitting an 80 yard TD on the 1st play of the game. I think the win has to go to OU and the Boz for the sheer bravado, despite the fact he's an awful human being.

Past Players: Lee Roy Selmon was so good that he was the #1 pick in the 1976 NFL Draft, and made it to the Hall of Fame despite playing on one of the worst teams in NFL history. Vince Young... likes to party with his shirt off a lot, and then disappear for days. Recently, he called his new team, the Philadelphia Eagles, the "dream team". The team is currently 1-3. Despite all of the greatness Vince brought in college, his pro career has been decidedly terrible. Also, Adrian Peterson's fumbles provide humor to me every Sunday. OU wins this one. 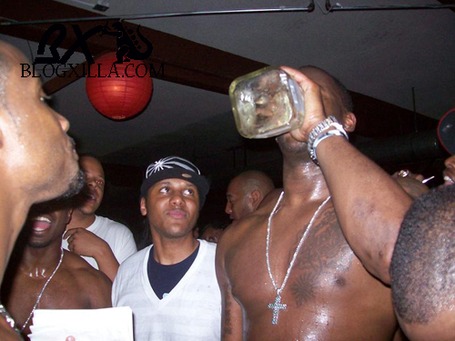 That looks an awful lot like a mason jar he's drinking out of...

Current Players: OU wins this one in a landslide. I haven't seen any good trash talk from Texas players, but there is about a million from OU players. Most notably, Oklahoma LB Travis Lewis endeared himself to both fanbases with this tweet: "I feel bad for nebraska . . Couldn't win In the big 12, then go to the big 10 and can't win. maybe conference usa would be a better fit". This is so awesome that I'm giving OU 2 points, but then taking away a half point for Kenny Stills' hair.

Complete WTF Factor: Roy Williams (The Texas one) decided to MAIL a $76,000 engagement ring to his then girlfriend, along with a recorded proposal. On the list of terrible proposal ideas, I imagine taking your girlfriend to Chuck E Cheese to propose is about the only thing worse. -1 for Texas.

Who Pays Our Bills: I don't think I really have to explain this. Ma$e really explained it the best with "money hanging out my anus".. which describes Texas perfectly. So while OU made a valiant effort to bluff Texas into giving us all a little bit more money, Texas still pays the bills here. +1,000,000 for Texas.

Final Score: Even with a comeback from OU, once again, Texas money makes the difference.

Hook Em Sooners? Boomer Longhorn? Whatever, just give us all your sweet sweet LHN cash.