Share All sharing options for: 2011 Game 5: Iowa State vs Baylor

Contrary to the belief of some people on another Cyclone web site, last week’s game was not a "Program Killer".  While it was a downer there have been worse defeats in the program’s history and in the last decade alone.  Even last year’s loss to Colorado was a worse defeat since it was a catalyst in keeping the 2010 Cyclones out of a bowl game.

Fact is Iowa State did not play like they were ready for prime time and the gentle stylings of Gus Johnson.  Three turnovers in the first quarter played a part in dooming the Cyclones and poorly timed and unnecessary penalties ultimately put the final nail in the coffin.

No reason to fear though, the team is still 3-1 and plays three teams this month that are beatable and one team that plays only half a game (looking at you aTm, we all know you take the second half off to fill your mason jars).  Like most things in life, things are never as bad as they seem in the moment.

Iowa State fell apart early and lost 37-14 to Texas.  Encouraging in all of this were the 111 yards combined between Shontrelle Johnson and James White and an average of around 5.3 yards per carry during it.  All of this while playing from behind the whole game.  Discouraging is the rash of injuries.  Brayden Burris is out for most, if not the rest, of the season.  Leonard Johnson was carted off with a neck injury, Shontrelle Johnson suffered a stinger and Kelechi Osemele aggravated his bad right ankle on a touchdown that should have never happened.  All in all, only Burris is expected not to play this week.

Baylor got their yards (429 in total) but ultimately fell late to Kansas State in Manhattan 36-35.  Robert Griffin III threw his first interception of the season in the 4th quarter but still went 23-31 for 346 yards and five touchdowns.  Kendall Wright was on the receiving end of three of those scores and racked up a school-record 201 yards receiving.

Iowa State vs Baylor: A History 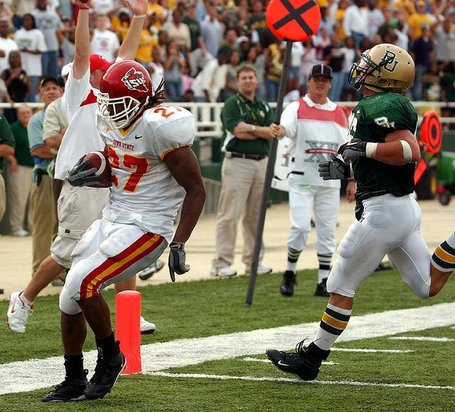 Iowa State holds an all-time series lead of 5-4 with only one of those games being played before the Big XII conference was formed (a 35-0 loss to Baylor in 1988).  The last time the Cyclones won in Waco was on a late touchdown by Stevie Hicks in 2004 that put Iowa State up 26-25.

You think turnovers and penalties might be a problem?  Iowa State is dead last in the NCAA with a -8 turnover margin and second to last in penalties per game (only beating Colorado by 2 yards/game) and it has only become worse as the season has progressed.  Earlier this week James White credited it to starting games too high on emotion and trying to do too much.  Steele Jantz was less forward than that but has to know that this is very much the case.

This author has no issue with Iowa State playing with emotion.  You are what your coach is and Paul Rhoads is an emotional guy.  What has finally happened though is the team saw the consequences of not hanging onto the ball and it was shown in the fact that Texas averaged their starts in the first quarter from Iowa State’s 29 yard line.  That whole field position article I linked to in the Des Moines Register last week?  Talk about bad timing. 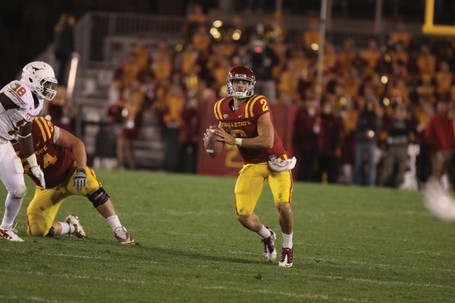 There really isn’t much to preview about the offense other than if they hang onto the ball they can play with just about anybody out there.  The physicality they showed up front against Texas was on par with the 2010 game in Austin but there were instances where they were overwhelmed by Texas’ aggressiveness and speed.  That is bound to happen but seeing a team not back down from it is a welcome sight as not every team in this league has Texas’ speed.

They key to this game is to not take ourselves out back and shoot ourselves in the head so early.  The first quarter has been a bear for this team to tackle all season and if they can get through that they’ll be in this until the very end.

There is so much to preview here but at the same time there is next to nothing.  Baylor is going to get their yards.  They rank 8th nationally in passing at 351.5 yards per game, 28th in rushing at 201.3 yards per game and 4th in scoring at 47.3 points per game.  When you have legitimate Heisman contender Robert Griffin III calling the plays and future first round NFL pick Kendall Wright catching anything thrown his way it’s going to be a bear to stop them.  This doesn’t even factor in running back Terrance Ganaway who averages 5.1 yards per carry and packs a lean 240 pounds.  Clearly you can see the effect Griffin has on opposing defenses.

The key here is not giving up the big play.  Art Briles likes to stretch the field horizontally and immediately come back with a pass down the field.  Wright is averaging 15.5 yards per catch, which is three yards more than he averaged last year.  Iowa State has given up 14 passing plays over 20 yards with five of those going for touchdowns (One each against UNI, Iowa and UConn and two against Texas).  Needless to say Briles is going to try to take advantage of this and more than likely succeed.   Minimizing those chances and being sure handed in tackling is the only way for Iowa State to stay in this game.  Like Dan Patrick said, "You can’t stop him; you can only hope to contain him."

Special teams had a rough week last week.  The first blocked punt against finally happened in the Paul Rhoads era when Texas sent 10 guys and simply overwhelmed the blockers.  Texas showed they were coming and no adjustments were made or a timeout called, which is disappointing.

Josh Lenz finally put the ball on the ground at the wrong time when returning the ensuing kickoff from a Texas field goal that put them up 3-0.  Fortunately Lenz is not one of the chronic fumblers and I have little to no doubt this will not become a habit.

Still awful at field goal kicking and on 2nd down last week before Guyer’s attempt I called out to my brother than if they don’t get off the right hash he will miss the kick.  Sure enough he did.  Look for more Grant Mahoney as the season goes on. 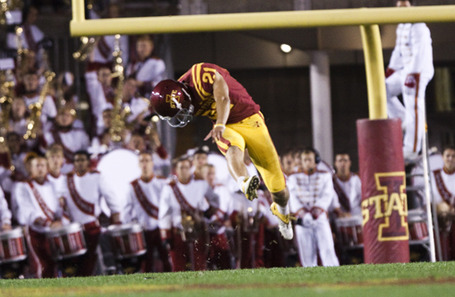 A situation to watch out for will be both the punt and kickoff return teams of Iowa State against Baylor.  Baylor’s defense ranks 109th in punt defense and 82nd in kick return defense.  Iowa State has excelled more in the kick return game and is ranked 34th in the nation but look for special things from Josh Lenz and the punt return unit if the defense can get off the field on 3rd down (which is a tall order).

50/50 Prediction: Current Season 0-4: Aaron Horne scores his first touchdown as a Cyclone.  Has to happen one of these games, right?

Unlikely to Happen but We’ll Light a Dumpster on Fire if it Does: Current Season 2-2: Not really sure what to pick on this one.  A win would not surprise me enough to light a dumpster on fire (yeah, I said it) but at the same time I feel a win is still going to be tough.  Let’s go with this: If Iowa State doesn’t turn the ball over once we’ll be lighting up a dumpster.

They say in the NFL you are what your record is and it’s mostly true.  The talent gap is not incredibly wide between the top and bottom teams and all it takes is a few years of good coaching and offseason acquisitions to turn a team around (see: Detroit Lions).  However, this same thing cannot be applied to college football.

With all of the scheduling differences amongst teams it’s hard to make heads or tails of how good a team is.  We know Iowa State has some legitimacy as they have knocked off two BCS foes in close games with one being on the road against the defending conference champion.  When the Cyclones took the field against Texas last week they looked liked they belonged and even won many of the physical matchups early.  Alas, the turnovers doomed them early and they were never really in it past the first quarter.

I feel Iowa State is teetering on being a good team and they will jump into the very good category if they start holding onto the ball.  They won’t be great because there are still depth issues at numerous spots but very good is good enough to get 6 or 7 wins with this schedule.  Good is good enough for 5 wins and likely a repeat of 2010 and staying home in December.  This game will go a long way towards determining which path this young Cyclone team wants to take.

Baylor on the other hand, is a conundrum on the other end of the spectrum.  They won a shootout with a TCU team that has given up more points this year than they did in all of 2010, dominated a Stephen F. Austin team that pushed Northern Iowa to their limits, poured it on against Rice in the 2nd half and finally lost a close one to Kansas State.

Like I mentioned above, Baylor will get their yards, and they will get them in chunks.  What remains to be seen is how well they themselves hang onto the ball (they are -1 in turnover margin, good enough for 77th in the nation) and which defense shows up.  Is it the one that shut down Stephen F. Austin and then Rice in the 2nd half or is it the one that couldn’t put a hand on TCU or Kansas State late in the game?  What concerns me is the Baylor defense is streaky enough to allow their offense to build a two or three touchdown lead and that will be all she wrote for the Cyclones.

Iowa State is not built to come from behind and they will likely fall down early even though it may be no fault of their own.  However, they’ll show some mettle and a road game where football is the only focus may be what they need to get back on the right track.

Day late and a dollar short this week though, Baylor is pretty legit.  There will be more positive than negatives for the Cyclones but not enough in the end.

PS – Baylor is favored by 14 points in this one.

PPS – Offensive line depth is a huge concern right now with Burris out and Shaban Dika banged up and off the depth chart.  Another lineman injury and Jantz will be running for his life even more.  However, I am encouraged by how Carter Bykowski has been able to step in at left tackle when Osemele has needed a breather.

PPPS – This offense needs a leader in addition to Osemele.  I feel that is one of the biggest issues with the turnovers.  There is no steady hand like Alexander Robinson to calm these guys down.