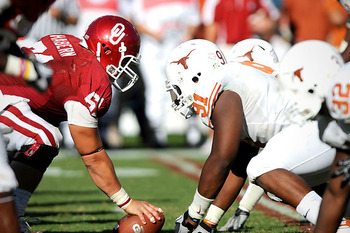 Since the Cyclones are down in Branch Davidian territory, a lot of you are probably not getting drunk in a tailgate lot this week. Instead, like us, you are probably drinking beer at home and watching a full slate of games. Here's your open thread for all the early games today.

No. 3 Oklahoma vs. No. 11 Texas (11:00am, ABC) - What a fitting scene for this matchup. Texas State Fair brings you an abundance of fried food, Oklahoma and Texas bring you an abundance of egos. It's an exercise in excess! And here's our guide on who to cheer for: Texas or Oklahoma.

No. 17 Florida at No. 1 LSU (2:30pm, CBS) - Florida will be giving a true freshman QB his first start at Death Valley. Expect the Tyrann-osaurus to go to rape town on Jeff Driskell.

I suppose you could count Iowa at Penn State, if you're into watching two disappointing teams try to out crap each other on offense. Then again, it looks like Ken O'Keefe figured out it was the 21st century and he could try something other than run-run-pass, so there's that. In more interesting news, Urban Meyer has been linked to Penn State, and is calling the game.