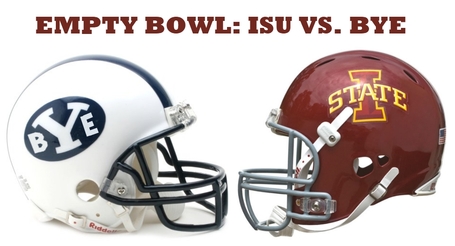 Week 9.5 finds Iowa State taking on the BYE Fightin' Voids, one of their oldest rivals and an independent powerhouse in college football. The BYE week has always been a challenging one for Iowa State, because so often the Cyclones are tempted to look forward to the next opponent. This is a mistake, because Iowa State has technically never beaten BYE. Each game for the past 60 years has ended in a 0-0 tie, with the exception of Jim Walden's last year when Iowa State lost 14-0.

BYE brings a stout defense to Iowa State this Saturday. Currently ranked number one in the country in every statistical category, BYE allows 0.0 passing yards per game, 0.0 rushing yards per game and 0.0 points per game. Iowa State is going to STRUGGLE moving the ball against this team; but it remains to be seen if Herman's patented "soften the defense up with runs out of the shotgun, then some bubble screens" offense will prove effective.

Conversely, Iowa State should have no trouble shutting down BYE's offense, an "attack" ranked last in all major statistical categories. However, the BYE offense has had some success against teams like Kansas, Minnesota and Colorado, so the Cyclone front seven needs to be prepared.

This game should prove interesting, as this is a rematch of sorts. Iowa State met BYE once already this season on September 24, but may have been distracted by the Texas game the following week. Neither team looked prepared, and the game ended once again in a 0-0 tie. While Iowa State has a new quarterback under center since that week 3.5 meeting, a similar outcome can be predicted this week: