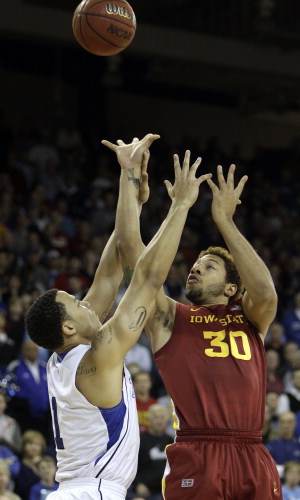 I don't think I can accurately count how many times I've heard this in the past 48 hours: "The Cyclones lost to Drake in 1999-2000 and still made the Elite Eight."

Of course, it isn't a matter of causation or even correlation because Iowa State has actually lost to Drake countless times (nine out of the last 30 to be exact).  The discouraging part is that six of those losses have occurred since 1997.

First things first, this was game #2 on the season.  As in second.  As in there are at least 30 more games to be played this season.  With a new team and countless new moving parts I'm not sure we've even seen the tip of the iceberg yet.  At this point we have to strain our eyes to see something that may or may not be an iceberg.

Secondly, Fred is a smart guy.  I don't say that in the sense that he'll figure it out and make the proper adjustments, I say that in retrospect with his coaching staff.  Everyone knew and agreed upon his hiring that an experienced bench coach at his side was a must, and Fred agreed.  Unfortunately, we lost Lutz after just one season.  At that point Hoiberg could've gone after another experienced coach to fill the void or he could go the route that he ended up taking in a recruiter and promoting TJ Otzelberger.

This is where Fred being a smart and self-aware guy comes into play.  He knew in May of 2010 that he needed an assistant coach with experience.  In May of 2011 he no longer believed that was the case.  Will there perhaps be some growing pains through the loss of Lutz?  Yes.  Can you pinpoint that with facts before Thanksgiving? I'd like to see you try.

I will give the cliff jumpers this; if you think that Scott Christopherson is not the answer at point guard, I agree.  Taking one of the best 3-point shooters in the NCAA and putting him on the ball to make decisions, initiate offense, and be the floor leader takes away from what makes Scott a dangerous weapon.  Scotty is meant to be run off screens and benefit from penetration and help inside by having his feet set 20'-9" from the hoop ready to launch.

He isn't Jake Sullivan manning the point (yes youngsters, that did happen for an entire season after the flameout of "Tricky" Ricky Morgan) because he is much better with the ball in his hands and is exponentially more athletic.

I think you have to put Chris Allen into that role.  He isn't a true point guard but neither is Scott.  Maybe his decision making isn't as strong or he looks to score first, or who knows the reasoning, but I don't believe that Scotty is the answer.

If you're beginning to think that I'm not going to criticize the Mayor and Ames' own favorite son that is wrong as well.  Another facet that I didn't agree with last night was the switching of screens.  It was largely meant to be among the guards only but at times it did end up being from a guard to a "big" creating a mismatch that Drake had some success exploiting.  The Bulldogs were also able to slip some of these screens and take advantage in lacking communication that is so necessary with a switching defense.

It isn't every time or all the time, but largely when teams play a switching defense it is to curtail a team with great outside shooters or because they can't defend screens appropriately without switching.  I'm not convinced that Drake is a good enough 3-point shooting team to warrant this defense but I also think it's too early to judge the reasoning behind the strategy.

The problem versus Drake wasn't the defense, it wasn't the coaching scheme, it wasn't the terrible TV or radio commentary (though, they did cause much angst among the Cyclone viewers), and it wasn't that Scott Christopherson was playing point guard.

Basketball is a simple game.  Create good shots on offense and limit good shots on defense.  How every coach defines good as part of their scheme varies and there will be nights on defense that you play perfect defense yet the opponent makes a tough shot.  Last night's problem was ISU's shooting woes.  A team chock full of experienced shooters; from Babb to Allen to McGee to Christopherson to their head coach (who, contrary to the beliefs of some has no control over players making shots and isn't allowed to take them himself).

Outside of the poor shooting that was rampant among the team last night I think the biggest missing piece was Melvin Ejim.  I don't think he's the "straw that stirs the drink" but I think he can alleviate the pressure from the guards and White by being another scoring option on the block.

Part of that can bring all of this back together...right now I believe that Scott Christopherson was selected by the coaches to run the point guard because he shows the most discretion with his shot selection.  Babb may also be mentioned there but I think Scott is more comfortable handling the ball full court.  Shot selection is the big key to the point above about getting good shots.

Patience and ball movement are the keys and with a team that is lacking a primary ball handler that movement needs to come from the pass.  Off the ball screens-as opposed to the on ball screens that were so successful last year with Diante Garrett-need to be the modus operandi for this offense.

Even with the overall lack of offensive effectiveness, Iowa State was still able to get plenty of good looks.  They just managed to miss far too many of them.

Royce White needs his touches on the block and also needs to kick and re-post to establish position.  He will likely have a hard time with getting called for charging this years as defenders take advantage of White's size, strength, and aggressiveness.  White has to be patient on the block.

It's disappointing but it's too early to call it a setback.  In 1994-95 Iowa State lost an exhibition game to Marathon Oil that was a wakeup call for a group of seniors and a new head coach, Tim Floyd.  That was with a group of seniors that included some gaudy experience; players like Loren Meyer, Hurl Beechum, Julius Michalik, James Hamilton, and yes, Fred Hoiberg.

If that group of experienced players can lose a game like that then should it be so shocking that a team that will require meshing from so many different players, new and old, could lose a game at Drake?  Can Hoiberg take the lessons learned from a disappointing loss as a player and apply them as a coach?  Despite the perceived issues currently with no Bobby Lutz and no true point guard?