The following seniors will make their final appearance in Jack Trice Stadium on Friday night:

It’s very possible Earl Brooks is not part of that list as he should receive a medical redshirt, but admittedly I just took this off Steve Malchow’s blog.

Head into the stadium early and wish these guys well.  There are a lot of big time contributors on that list and they deserve our best as fans.

This week's hit tape and then onto the game after the jump.

Iowa State was on a bye last week but is coming off a 13-10 victory over Kansas where Zach Guyer kicked a 42-yard field goal with 4:30 left to clinch the victory.  Jared Barnett had 125 yards rushing, which was the most for a Cyclone quarterback since Bret Meyer in the 2004 Independence Bowl.  Preview favorite Aaron Horne scored his first career touchdown as a Cyclone on an 18-yard reverse.

Oklahoma State continued their massacre of the conference with a 66-6 win over Texas Tech that was highlighted by a botched kick return by Tech, turned into a recovery and then another fumble followed by a "where’d it go" look by the returners and finally a recovery by Oklahoma State for a touchdown.  In other news, Brandon Weeden keeps throwing that fade to Justin Blackmon.

Iowa State vs Kansas: A History

No one really knows exactly how good or how bad Oklahoma State’s defense is.  They lead the country in turnover margin with a +18 margin and over half of those coming from interceptions gained.  However, they are ranked 101st in total defense.  Either way, Jared Barnett cannot be chucking the ball around 25 or 30 times this game.  If his passing numbers are that high then Iowa State probably is down early and trying to hold on desperately. 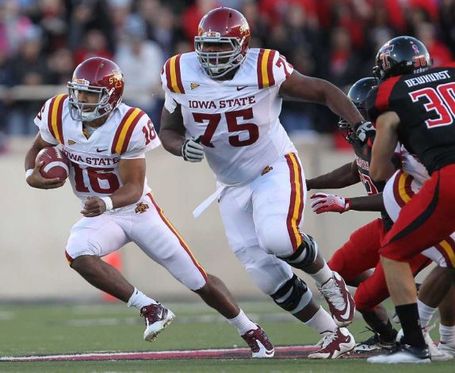 The Cowboys’ defense is giving up 186 yards per game on the ground and with the wind a possible factor on Friday night this is going to be the time for Iowa State to try and muscle their way through the Cowboys front four just like they did against Texas Tech.  The advantage to running the ball is to shorten the game, which something an underdog will always try to do.  This is a huge key with an explosive offense waiting to get the ball on the other sideline.  Everyone and their mother knows Iowa State is going to do this so how do they go and have success?  Simple, out scheme the Cowboys.

With the bye week this offense has had two weeks to prepare for this team and this team only.  The amount of time to gameplan and install different looks is only beat by the amount of time a team gets to prep for a bowl game.  Clearly the season does not rest on this one game but knowing the potential for this to be a program changer, the upset of the season and clinch bowl eligibility there is no reason not to pull out all of the stops.

You test a defense that knows what you want to do by testing their discipline.  If there was ever a time to mix in a bevy of misdirection plays and runs with multiple options at Barnett’s disposal this is it.  We saw a couple of triple option looks against Kansas two weeks ago and one can hope that this plays a bigger part on Friday night.  Stretching the Cowboys to cover all 53 yards of the width of the field will be the test for Tom Herman and after the last few  games I think he is up to the challenge.

Paul Rhoads admitted that Oklahoma State does not do a variety of things on offense but what they do they do exceptionally well.  They are primarily based out of the Pistol and this allows Brandon Weeden to hand off to his halfbacks and gets them downhill quickly but also the option to get rid of the ball quickly without having to do a three step drop.  Having watched the Cowboys numerous times this year I always felt their most dangerous aspect was how quickly they could run a 7-yard hitch or out pattern.  They can eat yards in a matter of seconds and it’s an incredibly beautiful thing to watch if your team isn’t on the other side of the ball. 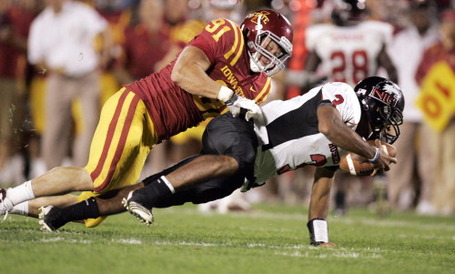 Rhoads has talked constantly about the football team playing together and how the defense feeds off the offense.  This was a perfect example against Texas Tech when the Cyclones were able to run the ball effectively, get out of trouble when necessary and hold onto the ball.  The long drives (including the nine minute clock chewer that sealed the game in the 3rd and 4th quarter) kept the defense fresh and allowed them to execute their scheme flawlessly.  Iowa State’s defense missed two tackles that game and only allowed eight yards after those misses.  This is very clearly what has to happen on Friday night for the team to have shot.  The units must work as one and feed off each other to keep the Cowboys in check.

With two weeks to prepare I fully expect this Iowa State defense to come out ready to execute.  Everyone is on record that you will not see anything exotic and I tend to believe it.  This game is going to come down to execution and who does their jobs better.  The Cyclones will continue to primarily rush four and likely employ the same strategy they did against Texas Tech: fill the gaps inside to stop the run and drop the rest into a deeper coverage to prevent the big play.  How Oklahoma State adjusts will be the key.  Mike Gundy is a much better coach than Tommy Tubberville is when it comes to in game adjustments and how to get the most out of his offense so we will have to see if Iowa State can out execute the Cowboys for a full four quarters.  If the Cowboys are smart they’ll come out looking to run off tackle and to the outside quickly, which is where Iowa State’s defense has struggled with gap control all year.  If they come out slinging the ball I think it actually plays into the hands of Wally Burnham.

This week in Kicker Rehab: Zach Guyer.  Guyer made two field goals with the longest from 42-yards that clinched the game and made his only extra point attempted against Kansas.

This week in Holy Shit I Hope Our Special Teams Don’t Cost Us the Game: While Oklahoma State ranks 96th in kick return yardage defense by giving up 23.8 yards per return (Iowa State gains 23.35) they also have the nation’s leading kicker in touchbacks.  Kicker Quinn Sharp has put 48 balls into the end zone this season.  48!  For comparison, Grant Mahoney only has nine touchbacks.

Unlikely to Happen but We’ll Light a Dumpster on Fire if it Does: Current Season 3-6: Come on now, you know the answer here. 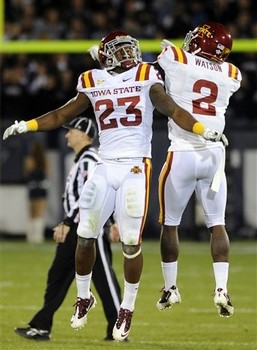 CanAzn and I had a discussion this morning on what this game means to the program and our own expectations of what to expect.  If you held a gun to my head right now I would pick Oklahoma State to win 37-21 with their offense finally wearing down the Iowa State defense in the 4th quarter.  That would be a huge step in the right direction for this team to take the #2 team in the country deep into the 4th quarter and I don’t think a single Cyclone fan could be unhappy with the loss in the long term.  The immediate pain would sting but the immediate reaction from the game would be mostly positive with perceptions increasing that Paul Rhoads has this team on the right track.  Alas, in the long term this game would fade into obscurity in the conscience of many.

But you all know me too well and I’m not about to predict a moral victory.

This staff has had two weeks to prepare and they might know a thing or two on how to beat teams looking for a national championship berth.  Paul Rhoads hired Wally Burnham to come to Iowa State and stop the prolific passing attacks found in the conference.  If there was ever a chance for both men to earn their paychecks and go down in Iowa State lore, this is it.  Oklahoma State is going to want to turn this into a track meet, but Iowa State is going to turn it into a fist fight.

PS - Drinking a lot of Kool-Aid here and I know it, but it's Senior Night and the last meaningful game in Jack Trice for 10 1/2 months so we might as well get up for it.

PPS - Per usual, make your picks in the comments.