Share All sharing options for: UPDATED: Iowa State and the Holy Grail 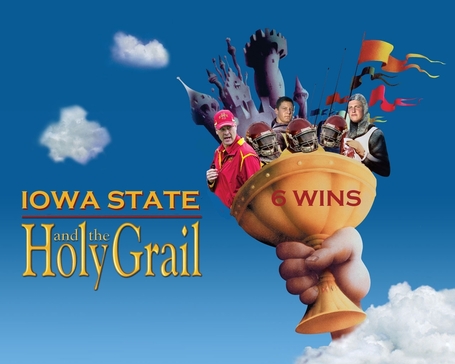 With the Iowa State football team sitting on a 5-4 season record (update: 6-4) with three (two) games left to play, Cyclone fans would normally start packing packing warm weather gear and anticipate spending the end of December in beautiful Tempe, AZ, Houston, TX or Shreveport, LA (yeah, do that). Unfortunately, 2011 isn't a normal year in the Big XII, with Iowa State's last three games coming against the number 2, 5 and 13 ranked teams in the BCS standings. So one might say that the last quarter of the season presents a slight challenge to Iowa State's bowl hopes. But fuck it. Let's talk about bowl games anyway (yes, let's).

The Big XII conference has seven bowl tie-ins in 2011, with five spots already locked up by bowl-eligible teams. Only Kansas is ineligible for a bowl at this point, with Iowa State, Missouri, Texas A&M and Texas Tech fighting for the remaining two Big XII bowls. Missouri only has to play a stumbling Texas Tech team and a pitiful Kansas team in the Border War, so the Tigers are almost assuredly guaranteed a spot. A&M also gets to play Kansas this weekend and a Texas team without a viable running back in two weeks, so they're also probably getting at least six wins and a bowl berth this year (way to enter the SEC on a high note, guys!) Texas Tech has to play Missouri and Baylor to end the year, two teams they are similar to talent-wise, but Tech will have to overcome Tommy Tuberville's "coaching" to sneak into a bowl.

The Cyclones' best chance for a Big XII-affiliated bowl is either the Pinstripe Bowl, played in balmy December temperatures in New York City, or the corporatastically-named Meineke Car Care Bowl of Texas. With Texas A&M and Texas Tech both fighting for bowl spots, one of those teams is almost a lock to make an instate bowl.

That leaves the Pinstripe Bowl vs. a Big East team in Yankee stadium, or another bowl that can't fill their conference requirement. Looking at conference bowl tie-ins, it looks like the New Mexico Bowl (Pac 12 vs Mtn West), Military Bowl (Military vs ACC) or the TicketCity Bowl (Big 10 vs CUSA) could have spots available for Iowa State.

There is no guarantee that a 6-6 Iowa State team will be invited to a bowl this year. But with the top-to-bottom strength of the Big XII in 2011 and the good turnout that Cyclone fans bring to bowl games, a bowl invitation would be likely. But first, Iowa State has to win at least one more game (done) to finish the year to even become bowl eligible. It's not likely to happen, but it will be exciting to watch.

Schedule: You fight with the strength of many men, Iowa State. I have no quarrel with you, but I dictate that you will not make the postseason this year.

Schedule: I command you, as the lineup of games you play this year, to stand aside!

Paul Rhoads: We bow to no ridiculously-daunting, borderline-insane anthropomorphic schedule.

Schedule: So be it!

(Iowa State plays until they lose to Texas)

Paul Rhoads: 'Tis but a scratch!

Paul Rhoads: I've had worse. Come on, you pansy!

Schedule: Victory is mine! (kneels to pray) We thank thee, NCAA, that in thy mercy -

(Interrupted by Iowa State kicking it)

Paul Rhoads: Come on, then!

Paul Rhoads: Have at you!

Schedule: You are indeed brave, Iowa State, but the year is mine!

Paul Rhoads: Oh, had enough, have you?

Schedule: Look, you stupid bastard, you're 3-3! You've got no room for error!

Paul Rhoads: Right. I'll do you for that.

Schedule: What are you going to do, fumble all over me? Commit a few personal fouls?

Schedule: You're a looney.

Schedule: Alright, you have proven your valor Iowa State; but there is NO way you can beat OSU, OU or KSU. You must concede the fight. Come on, Beebe.

Paul Rhoads: Oh, I see. Running away, eh? You yellow bastards! Come back and take what's coming to you! I'll rustle your cattle! I'll steal your stolen land! I'll...I'll...bring Ron Prince back from the dead! Come back and FIIIIIGHHT!