Kansas: It's Not North Korea!

Share All sharing options for: Kansas: It's Not North Korea! 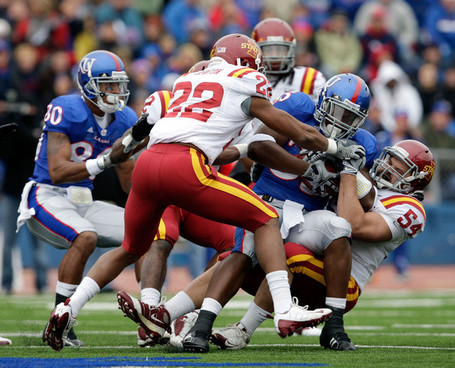 Kansas Football is going through some rough times right now. The 2010 season wasn't pleasant, but 2011 proves just how bad it can get. In fact the site FireJerryKill.com goes through a somewhat rigorous statistical exercise to prove just how bad Kansas is, and concludes not only are they worse than Minnesota, they're worse than everybody!

Normally we here at WRNL would pile on and make fun of all the pain the Jayhawks are going through, it's kind of our thing. But we're not totally soulless and really, that's just beating a dead horse. Instead, we extend an olive branch to our neighbors to the southwest, here is a list of nice things about Kansas and Jayhawk football:

Turner Gill is incompetent, not incontinent:  The Jayhawks head coach has yet to wear adult diapers on the side lines, something Kansas State can’t claim.

Memorial Stadium could hold a pretty sweet track meet:  At any moment outdoor track enthusiasts could host a meet in conjunction with a football game. It’s a football field AND a track ... it’s like the Swiss Army Knife of Big XII venues. 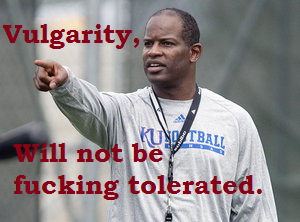 Awesome Seats Bro!:  Getting tickets is not an issue in Lawrence; get 'em cheap - right up front!

Turner Gill seems like a nice guy to have as a neighbor: Coach Gill seems like the kind of dude that never mows before 8AM and always gives you a friendly wave. In fact, he's #1 on the Stanford review's list of "Head Coaches Least Likely to be a Pedophile".

Kansas almost never has Hurricanes:  There's a Cyclone joke in there somewhere, but seriously they have somewhat mild weather minus the whole Dorothy and Toto bit.

It's nice to see a place that gives white guys a chance to play basketball:  Besides Duke.

The obesity rate is relatively low:  Compared to SEC country anyway, although a lot of that can be attributed to Mangino moving out of the state.

It's not North Korea:  Sure, Turner Gill is widely known as the coach that doesn't allow naughty words at practice, but his is nowhere near an actual communist regime.  Additionally, Kansas was admitted to the union in 1861 and is definitely not controlled by an often-caricatured, evil dictator. America, fuck yeah!

Roy is still stealing our children:  So he left you for a prettier state ... at least he's still gutting Iowa of its finest basketball talent. Rest assured, we still loathe that cocksucker.