Share All sharing options for: 2011 Game 11: Iowa State vs Oklahoma

We are a week removed from the largest win in school history and only one word still comes to mind:

This guy drank a fair amount of Kool-Aid going into last week’s game but very much felt the Cyclones could give the Cowboys all they could handle after having 13 days off and a chance to prepare for an offense built on execution over style.  Sure enough, all it took was a few bad throws here and there for things to start to unravel.  Admittedly, I was concerned when Oklahoma State went up 24-7 but Jared Barnett showed more fight and leadership than we have seen in a very, very long time.  By the time overtime rolled around I think I was one of 52,000 that had no doubt in my mind that Iowa State would end up on the good side of the score at the end.  Seeing Jeff Woody rumble those final 25 yards was something special and a memory he will be sure to take with him forever.

Now the Cyclones must refocus and take on an Oklahoma team coming off a late upset by Baylor and trying to avoid a two game losing streak in the Big XII for the first time in Bob Stoops’ history.

Now let’s jump to a shorter than normal preview due to the holiday weekend.

Oklahoma lost for the first time ever to Baylor, 45-38 on a late Robert Griffin III touchdown pass after he single handedly shouldered the offense when Oklahoma inexplicably failed to play contain on the final drive.  Landry Jones somehow threw for 479 yards and NO touchdowns.  Instead Blake "Belldozer" Bell punched the ball into the end zone four times to keep Oklahoma within striking distance before scoring twice in the final six minutes to tie the game.

Iowa State vs Oklahoma: A History

Awful, just awful.  That is all. 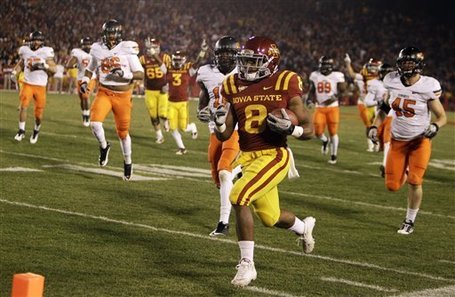 More than anything this part of the game concerns me the most.  Iowa State has had their most success against the questionable defenses of Texas Tech, Kansas and Oklahoma State.  The Sooners’ defense is not at the elite level of years past but is still ranked 62nd in the country, which is an entire 40 spots ahead of Oklahoma State.  A lot of this ranking is due to the depth of the defense and questionable line play that has forced Oklahoma defensive coordinator Brent Venables to play even more aggressive than the average Sooner defense.

There are yards to be gained here, and no doubt a similar gameplan mixing in runs and short passes from Oklahoma State will be used.  The X factor again will be Jared Barnett and how he handles playing in Norman.  More proven Iowa State quarterbacks have went down there and not come out the same so keeping Barnett off the turf early will be a huge key to keeping this game manageable.

Believe it or not, I am not insanely worried about this aspect of the game; which, of course, means it will turn around and bite me in the ass just as bad as last year.   Oklahoma struggles to run the ball consistently despite ranking 51st nationally in this category.  The use of Blake Bell has become more frequent as the season wears on and one has to wonder when he will finally complete a pass against an over pursuing defense.  *Looks around curiously while trying to ignore Iowa State history*

Landry Jones is going to get his yards just like Brandon Weeden did but he has been even more mistake prone than his in-state counterpart.  Without a game breaking threat at running back and the leading receiving in NCAA history, Jones has struggled to remain consistent as his load in the offense has increased.  Wally Burnham’s defense has done a great job taking away elements of the game this season and you have to think that they are content to let Jones rack up yards until he hits the red zone.  With the pass rush Iowa State managed to get at times last week against the best line in the conference you have to be confident that they can at least keep Oklahoma in check long enough to hang around and do something ridiculous for the second week in a row.

This week in Kicker Rehab: Zach Guyer.  Guyer made a field goal from 24 yards after missing one earlier and connected on all of his extra points including the game tying one late in the 4th quarter.

This week in Holy Shit There Is No Way We Win This Game: Bob Stoops has lost three times in Norman and one came against Texas Tech this year.  Also, as mentioned earlier, he has never lost back-to-back games against Big XII teams.

Unlikely to Happen but We’ll Light a Dumpster on Fire if it Does: Current Season 4-6: Seeing how one of the WRNL writers set fire to a couch last weekend I think this prediction may have run its course.  Of course, if it has not, you again know the answer here.

Norman has been a house of horrors for Iowa State but this is arguably the most complete team that the Cyclones have fielded since at least 2005.  It’s hard to get a gauge on the true talent of the team with the strength of the Big XII and a different team falling each week but there is something special brewing in Ames.

Unfortunately the team is rather young and while it has shown us a lot of Paul Rhoads’ recruits have a future in this program it also means they’re more subjective to the highs and lows that come with playing college football.  This has the makings for a huge hangover game for the Cyclones.  They will keep it closer than last year, and even cast doubt on the outcome of the game for awhile, but eventually will fall victim to the Sooners again.