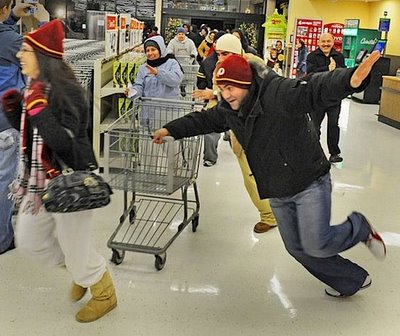 There's no way in hell you can convince me to leave my couch to brave the storm of deranged housewives pepper spraying people to get an Xbox. Also, there's a ton of football on, including Iowa-Nebraska, otherwise known as Farmegeddon The Heroes Game. I can only hope Thunder Collins and Abe Satterfield show up at midfield pregame.
Today's Game Schedule

Need an excuse to watch Big East football at 10:00 AM? Wondering how each game today affects ISU's bowl chances? Look no further.

Last night's Longhorn victory over little brother A&M ensured that the Aggies would end the season at 6-6, and you'd better believe that "Operation: Screwjob" is about to be alive and well in the Big XII Bowl offices. I think that even if Mizzou pulls their record up to 7-5 in the Border War on Saturday, a 6-6 Cyclone team will be taken ahead of both defectors. This means our place in the post-season is probably no longer determined by what conferences can fill what bowls, but by the ability for the Big XII to sneak a second team into the BCS.

The new "Boise State" rule in the BCS this year gives an automatic bid to any conference champion not from an AQ conference that finishes in the Top 12. Houston and Tulsa are 7-0 in conference play, and the winner of this game will represent the West division in the C-USA Championship Game. Should Tulsa pull off the upset, Houston will drop out of the Top 12, and the non-AQ spot will open for an At-Large team from the Big 12.

Because nothing would point out the absurdity of the system than if the SEC West representative next week was determined by the most unfair of all tie-breakers: Highest BCS Standing. (It's worth noting that Nick Saban and Les Miles both have a vote in the coaches' poll. Bobby Petrino does not.)