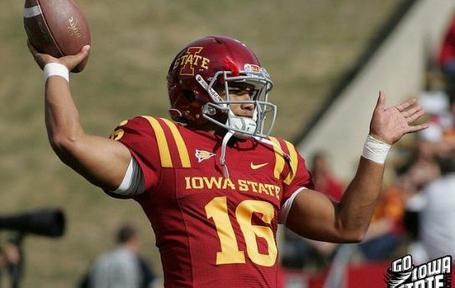 With last Saturday's win against Texas Tech, Iowa State moved to 4-4 on the year and picked up their first conference win of the year. Maybe more importantly, freshman QB Jared Barnett earned the first win of his career in his first start at Iowa State. Although offensive coordinator Tom Herman has been raving about Barnett's potential since he signed with the Cyclones in 2010, it was impressive to see Barnett follow through on that potential in such a short time.

Since some may have been too hasty to annoint Steele Jantz as Iowa State's new god/Seneca, it's probably best to take a more cautious approach with Barnett. Still, Barnett's performance on the road in his first start should give Iowa State fans hope for the future, especially considering the less than stellar start to his career. After the jump, a look at the trajectory of Jared Barnett's time at Iowa State, and some predictions based on these trends.

First snap in college game: Takes kneel down snap at the end of first half of UConn game; falls over.

First significant playing time in college game: Relieves Steele Jantz in first quarter after three straight incompletions and an interception. Goes 16/36 for 180 yards with no touchdowns and no interceptions, runs for 66 yards. Leads offense to two scoring drives and a field goal.

First start in college game: Victory! Barnett is efficient in his first start on the road against the 20th ranked Red Raiders. Barnett passes for 144 yards (14/26) including one touchdown and no interceptions and runs for 92 yards. 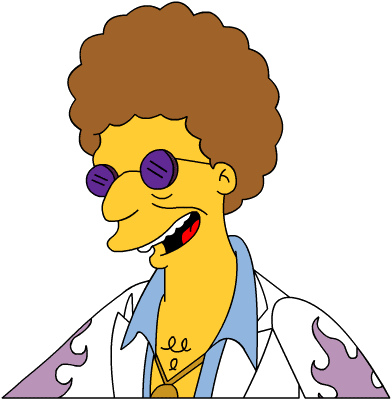 "If these trends continue... Ayyyyy!"

Kansas game: Barnett will throw for four touchdowns and 300 yards against one of the worst defenses in the nation and run for 150 yards more. The final score will be Iowa State - 49, Kansas - 7. Turner Gill is fired immediately after the game.

Oklahoma State game: Barnett will lead Iowa State to their second win over a ranked opponent in 2011. This will also be the last game that Barnett throws an incompletion, as he goes 24/27 passing for 450 yards, six touchdowns and runs for 200 yards. Mike Gundy will sadly declare that he is no longer a man, and that all real men are under the age of 20. He will lead the Cowboys in a mournful dance of "Teach Me How to Gundy" to heal their shame.

Oklahoma game: Barnett has a perfect passing performance in this game, throwing for 500 yards and 10 touchdowns. He also runs for 300 yards, and helps Iowa State get their first win in Norman since approximately 1952. A demoralized Bob Stoops will eat his visor in frustration.

Kansas State game: Barnett's performance is so sublime that it immediately renders the Kansas State defense sterile, as Iowa State wins in Manhattan 91 to -7.  From that day foward, impotent men will refer to their affliction as "Wildcat's Woe" (Bill Snyder will secretly be glad he has a name for his disorder). Despite being mathematically eliminated from the Big XII title chase weeks before, Iowa State will be named 2011 Big XII champions.

Fiesta Bowl: At this point, the Barnett-child has ascended from all mortal planes of being. He exists as sort of a nebulous gas, albeit a nebulous gas that is more than capable of fucking up your defense beyond all recognition. Barnett is ruthless against Boise State, as he becomes the first quarterback to pass for 1000 yards and run for 1000 yards in a single game. The Fiesta Bowl is called at halftime due to the heretofore underutilized mercy rule.

Will all these predictions come true? There's no way of telling. But at this point, based on the upward trajectory of Jared Barnett's career; it can be said without hyperbole that Jared Barnett will be the greatest quarterback to ever play at Iowa State (Note: previous statement not 100% hyperbole free).