Share All sharing options for: 2011 Game 9: Iowa State vs Kansas

A full four quarters of football.  Something Iowa State has not played since the Texas game in 2010.  Nebraska 2010? Nope, team started slow.  Iowa 2011? Again, no, the team tried to give the game away in the 1st quarter.  It was a joy last week to see an Iowa State team show up, on the road no less, and start fast, keep the foot on the pedal and finish with a nine minute drive that firmly sealed the game against Texas Tech.

The rest of the media covering the Cyclones has devoted a lot of time talking about the hangover game this week and with good reason.  After the upset of Texas last year the Cyclones came out slow against Kansas and needed a strong second half to win 28-16.  This year’s Kansas team is more talented on offense than last year’s edition and has circled this game on their calendar as the way to get out of the Big XII cellar.

Jared Barnett became the fifth straight Cyclone freshman to win his first start and led the Cyclones to a 41-7 rout of Texas Tech in Lubbock.  Barnett finished 14 of 26 for 144 yards and a touchdown while adding 92 yards on the ground and another touchdown.  James White and Duran Hollis both finished over 100 yards and gave the Cyclones dual 100 yard rushers against Texas Tech for the second year in a row.

Kansas turned in their worst performance of the season by falling to Texas in Austin 43-0.  Kansas only mustered 46 yards of total offense and an astounding -2 yards on the ground.  On the other side of the ball the Jayhawks gave up 590 total yards with 441 of those coming on the ground.

Iowa State vs Kansas: A History

Believe it or not, Iowa State’s win over Kansas in 2010 was the first win for the Cyclones over the Jayhawks since 2004.

Of course that Kansas game last year gave us this:

We wish Shontrelle the best of luck in his impending surgery and may he return to form in 2012.

Logically, this preview should be pretty simple.  Kansas boasts the second worst run defense in the country and Iowa State is coming off a 368 yard rushing performance which was its best on the ground since the Kansas game in 2001.  Except it’s not that simple.

No one would go out of their way to call the Kansas defense salty.  Their pass defense ranks 118th in the country and the overall defense is ranked dead last; so three factors and three rankings, all in the bottom three spots of the nation.  Again this seems like it should be simple. 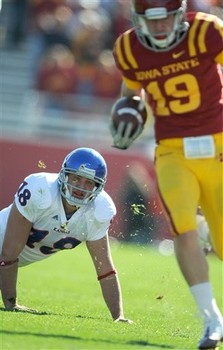 Where it becomes an issue is starting a freshman and whether or not consistency will carry over from week to week.  As we have all seen, Barnett has been mostly consistent in his two appearances against Texas A&M and Texas Tech.  Last week he was incredibly dynamic and moved the Cyclone offense down the field with his legs more than his arm.  But a scary shot to the head by Cqulin Hubert at the end of the 2nd quarter sent Barnett to the sidelines and the harsh reality of how close this offense is to putting in a still ailing/developing Steele Jantz.

We saw last week what can happen when a well prepared, hungry defense comes into town looking for a win over an offense riding an incredible high.  This Kansas team managed to take an early 20-0 lead on the same Texas Tech team Iowa State beat and kept pace with Oklahoma for a half.  Small victories, yes, but this same Cyclone team showed the same kind of fight in spots before going to Lubbock and putting together a complete game.

Kansas’ defense likes to gamble.  Their poor line play up front has forced them to commit more linebackers and corners to assist in stopping the run game and they can be hurt severely with play action.  Iowa State will try and set the tone early on the ground to see what yardage they can gain but likely will go to the air quickly if Kansas is committing eight or nine men to the run.  If Iowa State comes out hungry, matches the physicality that the Jayhawks are sure to provide and weather the early storm of emotion then they will survive the upset bid.

Offensively Kansas ranks 87th overall in total offense and 53rd in rush offense.  Chuck Long’s crew does not set the world on fire statistically but has shown flashes of methodically moving down the field early in games.  The drop off comes as the game progresses and the offense has to play catch up.  Quarterback Jordan Webb is not awful, but is not going to beat teams single handedly with his arm.  He’s completing 65.1% of his passes but only averaging 7.83 yards per attempt, which means the Jayhawks do not take many shots downfield.

Iowa State’s defense is coming off its best performance in recent memory by completely shutting down the Texas Tech offense and holding quarterback Seth Doege to 16 of 32 and 171 yards passing while snapping the Red Raiders’ 69-game streak of at least one touchdown through the air.  The pass defense ranks 4th in the Big XII and is finally starting to live up to the potential that everyone saw coming into the season. 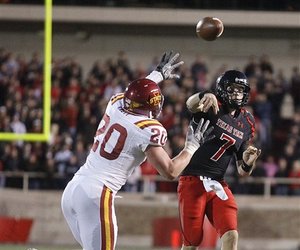 Just like Iowa State did on the road last weekend, Kansas will attempt to play a ball control offense and rush the ball to keep their defense on the sidelines.  Fortunately for the Cyclones, the Jayhawks employ more pro style and singleback type of sets that the Cyclone defense has had success against this season. Downhill running has not been as explosive against the Cyclone defense and only when teams such as Baylor and Missouri get their athletes into space has the Cyclone defense struggled.  Kansas has a few of those athletes but does not have the line play to back it up.  Their pass protection against Kansas State was some of the worst I have seen from a Big XII team since the Cyclones’ offensive line in 2006.  They can be physical rushing the ball but do not get outside fast enough to prevent plays from being strung out.

Just like the offense, the defense will have to come out and match Kansas’ physicality early on and keep the play in front of them.  Keep the big plays to a minimum, stack up to stop the run and let the rest take care of itself.  Last week showed the secondary can be left on an island and hold their own against talented playmakers.  Kansas lacks the ability of Texas Tech so a seasoned secondary should be able to keep pace and let the line and linebackers do their work up front.

This week in Kicker Rehab: Zach Guyer.  Guyer made two field goals with the longest from 42 yards and was five for five on extra points.  Grant Mahoney missed an early field goal that Cyclone Radio Network sideline reporter Ben Bruns believed to be a fake that was missed when Mahoney was not aware of the cues to call it.

Unlikely to Happen but We’ll Light a Dumpster on Fire if it Does: Current Season 3-5: If Iowa State gets their first shutout since the 2010 UNI game and their first conference shutout since a 41-0 victory over Baylor in 2001.

As mentioned above, the hangover is the big storyline this week and will continue to be until the Cyclones take the field at 11:30 tomorrow morning.  There is little logical reason for Kansas to come into Jack Trice Stadium and steal t his one from the Cyclones.  Their defense matches up poorly with anyone, including Iowa State, and their offense has lacked the consistency that is needed to be competitive in the Big XII.

However, as Iowa State proved last week, games are not played on paper and this game could be a huge trap after coming off a huge road upset and having Oklahoma State coming into town in two weeks as likely the #2 team in the country.

Focus will be a big issue this week and Kansas’ offense is more talented than the 2010 version and likely will not be held to only three field goals in the first half like last year.  Iowa State also started the game passing the ball in hopes of eating up huge chunks of field and did not fare very well.  Only when they started running the ball to start the second half did the Cyclones manage to find their groove.

A similar letdown at the start of the game must be avoided this year to avoid the upset.  Iowa State needs to stick to what they do well and do it as often as possible: run the ball.  Prove Kansas can be physical and stop the run.  If Kansas cannot keep up, Iowa State should come out unscathed.

After last week’s performance against Texas Tech this team has finally seen what can happen when it’s completely dialed in and that focus is going to be hard to snap.  The team knows they are close to a bowl bid and by executing their jobs, mixing in a little luck and being opportunistic they know they can get there.

Cyclones do not roll but win convincingly to move one step closer to a warm December.

PS - As I did last week, I am now demanding your predictions in comments.  So start predicting away.