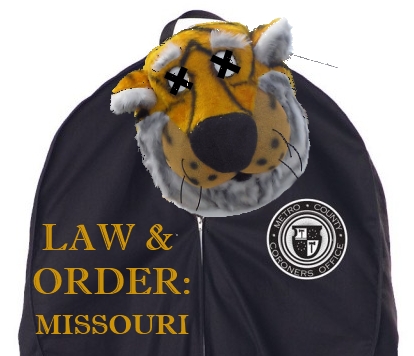 In the criminal justice system, realignment-based offenses are considered especially heinous. In college football, the dedicated detectives who investigate these vicious felonies are members of an elite squad known as the "Special" Victims Unit. As in the victims ride the short bus. These are their stories.

November 7, 2015. Detective's Stabler & Benson approach a crime scene in a remote part of the woods outside of Fayetteville, Arkansas.  Their shoes crunch along the fall leaves as they survey the scene. A body bag is open in the middle of a clearing. Detective Stabler pulls up the collar of his coat to protect against the unseasonably cold air.

Stabler:  Alright, what do we know about the victim?

Benson: Name, University of Missori Tigers. 175 years of age. Overweight, a little slow, addicted to methamphetamine, moonshine and airplane glue. Death from extreme blunt-force trauma to the head and body, most likely the result of severe, sustained beatings over time.  Grew up in the Midwest, but ran away from home about three years ago to be with the SEC.

Stabler: The SEC? God, that fuck. When are we going to catch this creep?

Benson:  I know, I know; the bastard needs to go down for what it's doing to these schools. But we need to let the process...

Stabler: Process?! Don't lecture me about "the process!" If we'd been allowed to do our jobs, this poor tiger would still be alive right now!

Benson: So what do you want to do, Stabler? Kick down the door of Mike Slive's office in Birmingham, go in with guns drawn? We're detectives, Elliot, not vigilantes. And that shyster is lawered up like no one else in the game. Besides, we can't take him on without backup. I hear he does weird, ungodly experiments... you hear what happened to that A&M kid?

Stabler: Aww, that human SEC-tipede stuff is just an old wives tale. No way that shit happens in real life.

Benson: I don't know, the stories out of College Station sound pretty messed up. The yell leaders still scream in hushed tones about what happened to their fallen comrade in their bunks at night.

Stabler: So what then? We just let the SEC continue to lure innocent programs to their death? We know their M.O. by now, we know the motive... The SEC gets close to a university; probably not the top program in their state, maybe it has a little inferiority complex. The SEC promises these schools the world; money, a safe home, prestige, you name it. Anything to bring them into their clutches. Then, when the new college is feeling good and comfortable, feeling loved; that's when the beatings start. And they are just relentless. At least once a week, all fall long. Makes me sick.

Benson: C'mon Elliot, don't act like Missouri is entirely blameless. They knew what they were getting into. They saw what happened with Arkansas and South Carolina two decades earlier. They knew where they would end up, and that's in the gutter with Vanderbilt and Kentucky.

Stabler: Nice, blame the victim. You know, sometimes I think...

Benson: Hey, Missouri didn't have to leave. It had a safe home for 100 years. It just got greedy. Started flirting with the Big 10 in 2010, tried to get something going then. When that went south, Mizzou just looked for the next conference available. And the SEC was more than happy to step in. You know, the Big XII even staged an intervention for Missouri, brought in new members to the family, anything to keep Missouri from hurting itself. Nothing worked.

Stabler: Just what are you saying, Benson; that Missouri was a willing partner in it's own demise?

Benson: Yeah, in a way. When you can't even win a championship in your current conference and you go and join the toughest conference in the nation? It makes it hard for me to have much sympathy for the Tigers.

Stabler: So how do you want to classify this? Assisted suicide?

Benson: Yeah, I guess. Just have to keep working the evidence, keep building a case against the SEC. Don't worry Elliot, we'll get the prick eventually.

Detective Benson walks back to the squad car. Stabler stays behind and lights a smoke. Squinting off to the horizon, he takes a long drag off his cigarette and walks over to the victim. Taking one last look at Missouri's ruined face, he zips up the body bag and walks away.