After taking a hiatus for several weeks, the Weekly Wrap Up is back, recapping the week that was in college basketball and taking a glance at what Iowa State has done on the court. 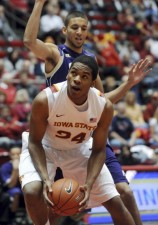 The Cyclones rebounded from a pair of losses to UNI and #15 Michigan a week ago to sweep both contests this past week as they easily handled Prairie View A&M 84-59 and dismantled iowa 86-76 on Friday night in a game that was much more lopsided than the final score indicated. The big news of the week was the perhaps permanent move to the point guard position for Chris Allen. In the Cyclones' first eight contests, Scott Christopherson was technically the lead guard, but Royce White and others shared primary ball handling duties as well, and the offense sputtered and looked uninspired at times. With Allen as the lead guard, the movement and execution on offense has been much better and Allen has notched nine assists to only three turnovers for an impressive 3:1 assist to turnover ratio.

Prairie View A&M and the hawkeyes aren't exactly a great gauge for how well this move will work out going forward, but ISU has three more non-conference tune ups before the conference season kicks off, so the kinks will continue to be worked out.

Other things that caught my eye this week included the continued development of freshman forward Percy Gibson, who earned his first career start against PV A&M and tallied 15 points on 7-8 shooting and grabbed 7 boards. Gibson didn't exactly fill up the stat sheet against iowa on Friday night, but he came off the bench to provide 14 minutes of solid play and has shown that he can hold his own in the post. On the flip side, Gibson's playing time has come at the expense of F Anthony Booker. The Southern Illinois transfer had been the first post player off the bench for most of the first eight contests, but has fallen out of the rotation with the emergence of Gibson. This will be an interesting situation to continue to monitor as Booker has all the physical tools, but has looked lost on both ends of the floor at times and the staff has appeared to notice.

Next Game - ISU has most of the next week off due to finals, but will return to action next Sunday as they host Central Michigan. The Chippewas currently sit at 4-4 and are led by sophomore swingman, Trey Zeigler, who's averaging 17.9 PPG and 8.6 REB early in the season.

ISU has most of the next week off due to finals, but will return to action next Sunday as they host Central Michigan. The Chippewas currently sit at 4-4 and are led by sophomore swingman, Trey Zeigler, who's averaging 17.9 PPG and 8.6 REB early in the season.

The conference notched several high profile victories over the last week and the depth of the league is really starting to show.

-#10 Missouri remains undefeated at 9-0 as they knocked off Villanova at Madison Square Garden in the Jimmy V Classic last Tuesday. Senior G Marcus Denmon has looked like an All-American thus far, averaging 21.3 PPG and knocking down 49% of his shots from outside.

-The 13th-ranked Kansas Jayhawks took down previously unbeaten Ohio State on Saturday. The Buckeyes were without sophomore big man Jared Sullinger, but KU has shown early on that they'll be a factor in the Big 12 race.

-Kansas State took on future conference mate West Virginia on Thursday in what turned out to be one of the more entertaining games of the year. The Mountaineers pulled out an 85-80 victory in double-overtime. The loss was K-State's first of the season, and they nearly dropped another as they narrowly escaped another loss as they pulled out a 79-68 overtime tussle against North Florida earlier today.

-For those of you that follow this type of thing, Jeff Sagarin has the Big 12 ranked as the second best conference. 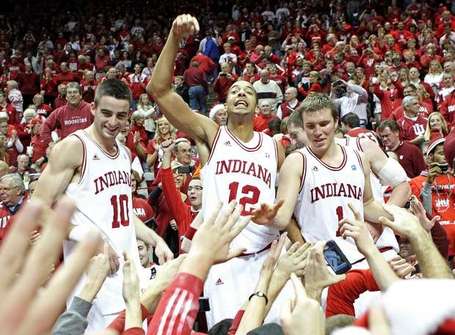 -What a scene in Bloomington, Indiana on Saturday. The unbeaten and unranked Hoosiers knocked off #1 Kentucky 73-72 as Christian Watford sank a three at the buzzer and pandemonium broke out. After three years of losing basketball, Tom Crean finally appears to have Indiana headed back to prominence.

-As great as the scene was in Hoosier land, it was overshadowed by perhaps the bigger story of the day as rivals Cincinnati and Xavier had their game called off early due to an ugly brawl toward the end of the lopsided Musketeers victory. I enjoy a good sports fight as much as the next guy, but Saturday's fight was a black eye on what was otherwise a fantastic week in college basketball. Suspensions were announced earlier Sunday, including six games for Cincinnati's Yancy Gates, who threw this devastating haymaker.