Allen on Point: Five Reasons Why Chris Allen is an Upgrade at Point Guard

Share All sharing options for: Allen on Point: Five Reasons Why Chris Allen is an Upgrade at Point Guard 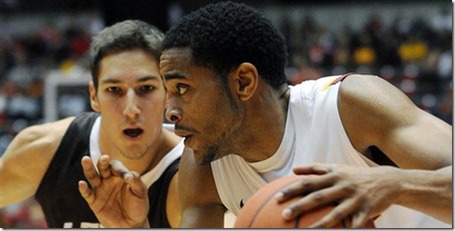 When Fred Hoiberg announced before the Prairie View A&M game that Chris Allen would be taking over point guard duties full time, most Cyclone fans had one question: Why now? Why not three weeks earlier? While it became quickly apparent that Scott Christopherson would NOT be leading Iowa State to a Big XII championship this season at point guard, he should be given credit for trying out a new position that he clearly wasn't comfortable with (that's what she said). That said, here are five reasons for Cyclone fans to be hopeful for the season now that Chris Allen is running the point.

1) Christopherson isn't a point guard: This should be painfully obvious to anyone who watched the first eight Iowa State games this year, but Scott Christopherson isn't a point guard. He is however, a pretty good shooting guard with experience in the Big XII, and putting Scott back at his natural position will help him; and by extension help the team. By allowing Scott to play off the ball, it allows him to get open for his specialty (and the reason he's on the team) the three-pointer. The switch may be paying off already, as Christopherson had his best game of the season against Iowa last Friday night with 16 points on 6-11 shooting.

2) Got a basketball jones for a pass-the-ball Allen: Allen's shot selection over the first eight games of the season has been somewhat... shaky to put it nicely. He's a ridiculously talented player, so there's natural appeal in watching him take the ball coast-to-coast and trying to drive to the rim. But when Allen tries to dribble between two defenders on every single possession while missing the open man on the wing, or jacks up a three-pointer early in the shot-clock, watching Allen trying to take over the game by himself quickly loses its luster.

3) Rebound relationship: Chris Allen isn't a great rebounder. In fact, he isn't even a particularly good one, with only 25 boards in ten games.The only person on the team averaging less? Scott Christopherson, which makes this point a bit of a wash, but fuck it, let's talk about it anyway. Point guards aren't required to rebound much, so putting Allen in the role with the least rebounding responsibility makes sense from a rebounding perspective.

4) Ball control/Court vision: Chris Allen is a far better ball handler than Christopherson, an asset that might come in handy when trying to bring the ball up the court or break a full-court press. Through ten games, Allen has 31 assists to 18 turnovers, while Christopherson has 19 assists to 21 turnovers. This stat sheds light on why the Cyclone offense just looks better with Chris Allen at point guard; Allen sees the court more clearly and is the better passer of the two. And when your starting point guard has an atrocious 0.9 assist-to-turnover ratio, it's time to make a change.

5) Department of defense: Again, nothing against Scott Christopherson, but he is nobody's idea of a lock-down defender. Watching Christopherson try to defend the other team's point guard by using J.J. Redick's patented bail-out method was initially frustrating, then hilarious, then maddening, and then circled back again to hilarious. But while watching Scott get repeatedly burnt by off the dribble was fun for a while, it won't help Iowa State win many games this year.

While Allen isn't a great defender either, he is quicker and more athletic than Christopherson, which can help keep the opponent from driving the lane for an easy basket. Opponents field-goal percentage when Christopherson was at point guard? 45.3%. Opponents field-goal percentage when Allen has been at point guard? 41.3% Slight improvement, but improvement nonetheless.

So what does this mean for Iowa State's basketball team this season? Probably not much at this point, it's still too early in the season to make any definite predictions for conference play. But Cyclone fans can be assured that Allen will be playing point guard at a higher level than Scott Christopherson, and that should give Iowa State more chances to win this year.