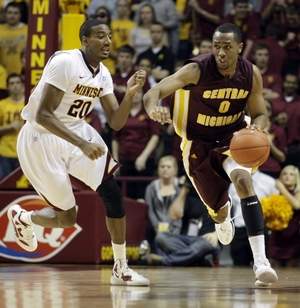 How do you top a weekend where two of the top three teams in the country were upset on the road and a ridiculous fight broke out between Cincinnati and Xavier? Well, you don't. It was a much quieter week in college basketball, but there was still plenty to take away from the last week of action.

The Cyclones had most of the week off because of finals, but returned to the hardwood on Sunday to take on a pesky Central Michigan team in Ames. ISU triumphed 59-52 in an ugly encore following the domination of in-state rival iowa. The Cyclones jumped out to a big early lead and were up by nine at the half, but left any energy and intensity they had in the locker room and slogged through a frustrating second session.

Royce White led ISU with 14 points and 8 rebounds and Tyrus McGee and Melvin Ejim had solid contributions off the bench, but that's pretty much where the positives end in this one. There's plenty of excuses and reasons we can toss around as to why ISU struggled, and some may be valid, but at the end of the day, this team just didn't bring a good effort.

Now, I could waste a lot of space and point out all the flaws and inadequacies this team and coaching staff has, but there's no reason. ISU survived the scare, got the win and will have another chance to get better when they take on Lipscomb on Wednesday night.

One last thing before we move on, I love Royce White's hair. It looks like shit but who cares? Royce will do whatever the hell he wants and besides, do you have the balls to tell it looks ridiculous?

Next Game - As I touched on earlier, Iowa State hosts Lipscomb. The Bisons (that's not a typo, they pluralized a word that already has a plural meaning), travel to Memphis on Monday night and are 6-6 on the year.

The conference had a strong week, notching a few signature victories and Baylor sophomore Perry Jones III had a monster game at BYU.