This amazing feeling comes over you once your perennially struggling team clinches bowl eligibility; it’s called comfort and it’s quite nice to have.

Due to this comfort it has become hard for me to name a single Cyclone fan last week that truly cared about the outcome against Oklahoma. Make no mistake, everyone I watched the game with were cheering at the good things and jeering at the bad things (and there were more of the latter than the former). However, there was this attitude of apathy based on knowing that there is another game to be played after Kansas State and it would be (hopefully) somewhere warm.

The same feeling swept over me in 2009 after beating Colorado to clinch that sixth victory. The Missouri game was not on TV, I was in California, all I could do was check occasionally on my phone and I was 100% content with that.

Now we focus on Kansas State and again the thought of apathy comes to mind. Kansas State is undoubtedly playing for more with a share of the conference title on the line with a win and a loss by Oklahoma State. While Iowa State is simply playing for betting jockeying positing in the bowl selection process and an almost certain guarantee to go to one of the Big XII affiliated bowls. Yet I only care a fraction of what I did three or four weeks ago.

However, you can damn well bet a portion of that will change when 11:30 rolls around tomorrow. I hate me some Old Man Wildcat. Now let’s jump to the final preview of the 2011 regular season.

Iowa State lost 26-6 to Oklahoma in a windy, messy and rainy snoozefest. After Jared Barnett completed seven of his first eight passes he finished 13 of 28 with 125 yards a touchdown and an interception. Once again the Big XII’s best defense in November stepped up in key moments to keep the score respectable. However, the early turnovers by Iowa State dug a hole that was insurmountable despite an eventual breakeven in turnover margin.

Kansas State was on a bye over Thanksgiving and it gave Collin Klein a chance to heal up. Hooray, I guess? Last time out the Wildcats beat Texas 17-13 despite only accumulating 121 total yards. Klein was once again Mr. Consistency and threw for a touchdown and ran for another.

The first thing I noticed when analyzing Kansas State was again the disparity displayed between the pass and rush defenses of a Big XII defense. Kansas State ranks 27th in the country in rush defense but 108th in pass defense. All this equates to an overall defensive ranking of 76th nationally. Nothing earth shattering but quite telling about what Bill Snyder wants his defense to do. Unfortunately for the Cyclones this matchup is again not favorable to their strengths. Everyone and their mother could put up yards on the ground against Oklahoma State and it only got worse as Iowa State’s time of possession increased throughout the game. However, this is a Kansas State defense that focuses squarely on stopping the run and everything else be damned. Barnett undoubtedly learned a lot last weekend in Norman but the question will be whether or not he can rebound to have a good performance with his arm. 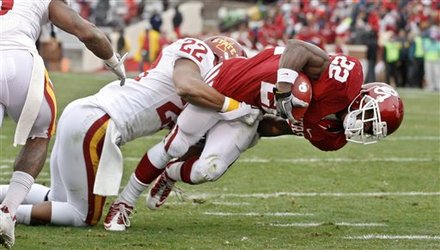 With this being the last game of the season I decided to take a longer look at the Big XII conference statistics and contrast them against the overall statistics for the season. Here’s the good news: Kansas State has the worst red zone defense in the Big XII and has allowed 30 conversions on 33 trips to the red zone, including 23 touchdowns.

Now this doesn’t mean Iowa State has to throw the ball 60 times to be successful. A disciplined defense coupled with a ball control offense like Kansas State’s will eat a team alive if they do that. At minimum you have to run to keep the defense honest and this is where Jeff Woody’s increased carries will come into play. The Cyclones lost a strong inside runner when Shontrelle Johnson went down and hammering the Woody at these guys may soften them up for the kill money shot from James White. The Wildcats will dare Barnett to beat them with his arm and he will have to connect on some longer passes to open up things underneath for both his receivers and running backs. Fortunately for the Cyclones the Wildcats have only sacked the opposing quarterback 11 times in conference play (one sack more than the Cyclones’ defense) and the time to throw should be available.

Maybe the defense should stop Collin Klein. He likes to run the ball I heard. The Cyclones defense did a remarkable job last week shutting down Blake Bell and even intercepting him when he tried the Tebow-esque fake power turned into a pass to the tight end. Very heads up play by Jake Knott to step in front of that. Klein is obviously more of a throwing threat than Bell but an Iowa State defense that ranks 4th in the Big XII in pass efficiency defense should be able to play on an island in the secondary and focus on keeping Klein from burning them deep.

Two things have to happen for the defense to keep Klein contained and get off the field. First, gap control on plays to the outside must be maintained by Patrick Neal, Jake Lattimer and the rest of the defensive ends. The only time Bell had success last week was on his speed option looks to the outside. On these plays the ends were dominated to the point of allowing lineman up on the linebackers right after the ball was snapped. That is not the recipe for success against a team who loves giving their quarterback the option to pitch or run and is dangerous at both.

Second, there must be pressure on Klein when he drops back to pass. Kansas State is 9th in Big XII conference play with 25 sacks allowed. Sacks aren’t necessarily needed here but pressuring Klein into bad throws will go a long way keeping the Kansas State offense from dominating the clock.

Pretty much done with this section after last week. Jarvis West is cool though!

50/50 Prediction: Current Season 1-10: Haven’t had a lot of success with this one. How about Darius Reynolds throws for a touchdown.

Unlikely to Happen but We’ll Light a Dumpster on Fire if it Does: Current Season 4-7: If somehow Iowa State is selected to the Pinstripe Bowl. My hatred to the bowl has lessened over the last week but dammit I want to go to Texas.

If the weather forecast is any indication this game may be a slobberknocker with a few turnovers and a whole lot of hitting. Bad weather will not be needed for this game to be physical, however. Both teams pride themselves on smashing the person across the line and try to keep the game in control by keeping the ball on the ground. Often times success in the run game, whether it is on offense or defense is driven by will over scheme and neither team will be short on the will to win this game.

We as fans may be content with six wins and a trip in a few weeks but I can guarantee that every win for this program matters and Paul Rhoads is telling his team exactly that. Kansas State does nothing special on offense or defense but is successful by being hungry, physical and disciplined. When Iowa State has matched up with teams with equal talent they have been mostly successful in their gameplan. Tomorrow will test that for 60 minutes. My confidence in this game waned while writing this, and Kansas State is far more legitimate than they get credit for, but outside of the Oklahoma game they have yet to have a truly bad day.

Coincidentally, Wally Burnham is turning the Cyclone defense into a unit capable of making the day very, very long for opposing quarterbacks.

Taking the win here just because we’re all tired and/or jealous of Bill Snyder. Paul Rhoads breaks another streak and Barnett becomes the first Cyclone quarterback to beat three Top 25 teams in a single season.

PS – For those of you in Chicago, I’ll be attending one of the gamewatches there. If you see a guy wearing one of our Riot shirts stop over and say hi. Chances are it’s me.

PPS - Your predictions, as always, are welcome. Even predictions from those Bring On The Cats guys.