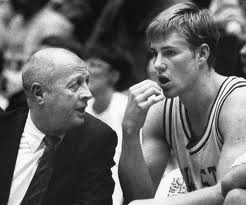 When Iowa State takes on Michigan in Ann Arbor tomorrow, it'll be a unique game for a few reasons. One, it's a (somewhat) rare occurence. ISU & UM have only met eight times in basketball, splitting the series at four games apiece. Two, it's Iowa State's toughest game of the non-conference schedule, a chance to play a non-directional school, with non-height/melanin-challenged players. And three, Johnny Orr coached at both schools, and remains each school's winningest coach in history. Johnny won 208 games as a Wolverine and 218 games as a Cyclone.

It's hard to over-emphasize how surprising it was for Orr to come to Iowa State in the first place. At Michigan, Orr had just finished a decade of dominance. The Wolverines finished their season in the NCAA Elite Eight twice and went to the championship game in 1976. Orr was the Big 10 coach of the year in 1974 and the National coach of the year in 1976. Johnny could have stayed in Ann Arbor for the rest of his career if he wanted.

Meanwhile, the Cyclones had just wrapped up ten years of futility, with four head coaches, a 41% winning percentage and no NCAA appearances (sound familiar?) Lynn Nance was fired after three seasons of unispired, half-court basketball that saw crowds in Hilton dwindle to an average of 6,000 per game (again, familiar). Iowa State hiring Orr in 1980 would be roughly the same as if Pollard had hired Thad Motta away from Ohio State after the Greg McDermott debacle in 2010.

How did Iowa State even do this? How did then-athletic director Lou McCullough convince an elite, charismatic coach to come to the basketball wasteland that was Iowa State at that point? Money, mostly. Iowa State gave Orr a six-year contract worth $45,000, which made Johnny one of the highest-paid basketball coaches at the time. But Orr also wanted a challenge, and wanted to see if he could build ISU basketball into a winning team.

Orr succeeded for the most part, mainly through the sheer force of his personality. Iowa State hadn't seen any kind of sustained success since the 1950's, when Gary Thompson was knocking down every shot he put up. By tapping his connections in Michigan, Orr was able to convince talented players like Barry Stevens, Jeff Grayer and Victor Alexander to come play in Ames, IA. And by installing a fast-paced, high-energy offense early in his tenure, he was able to bring fans back to the team and make Hilton Coliseum a fearsome place to play for opponents.

In fact, one could argue that Orr's intensity is exactly what the current edition of Iowa State basketball is lacking. Like Johnny, Fred Hoiberg is a charismatic guy who loves Iowa State. Unlike Johnny, Hoiberg doesn't have twenty years of coaching experience, a voice that sounds like he gargles with hot asphalt and a size-ten shoe that he can kick player's asses with. It's not Hoiberg's style to get tough with his players, not yet at least. It remains to be seen if Hoiberg can channel his inner-Orr and spark his team to play well on the road.

But while UM lost Johnny to Iowa State, Michigan was doing pretty well with the guy that Iowa State originally wanted to hire when they got Orr. From 1980-1989, Bill Frieder compiled a 191-87 record, won back-to-back Big 10 titles in 1985 and 1986, and won the National coach of the year award in 1985. But Frieder eventually left the Wolverines for Arizona State, which led to Steve Fisher being promoted, who brought in the Fab Five, which led to the Ed Martin scandal that ousted Fisher, which created a lost decade of sanctions and sucking that Michigan just finished working it's way out of.

So where does this leave both teams in 2011? Johnny Orr is beloved by both universities, Iowa State for building the basketball program for the ground up; Michigan for taking a good team and turning it into a great team. Orr left both programs in better shape when he left than when he started, unfortunately Iowa State was one bad hire (maybe two, *cough* Wayne Morgan *cough*) away from sliding back into mediocrity. So while Johnny won't be at the game tomorrow, hopefully he'll be there in spirit to provide the kick in the ass that this ISU team desperately needs.