Well here we are, just a little over 24 hours away from the second bowl game in Paul Rhoads’ tenure and what will hopefully be a great cap to an up and down roller coaster of a season. The season has been a great one to watch with the exciting wins over UNI and Iowa, the thrashing of another ranked team on the road and the upset that sent the BCS into chaos and hopefully moved us one step closer to a playoff.

Let me say this though, if the Cyclones fail to win on Friday there will be a hollow feeling about this season.

There were steps made in the right direction with the biggest win in school history and the sense that games on the road are no longer a crapshoot (Missouri not withstanding). But make no mistake, bowl games are a way to send the seniors out with a win, validate what the program is doing and create momentum heading into the very important January workouts. This is not to take away from the accomplishments made this season, and just making a bowl game is good enough from a development stand point. But winning a bowl game gives the returning players even more incentive to perform well off the field.

Rutgers will be no easy foe in this one. Even though they went 8-4 in the Big East they bring a mix of talent and enthusiasm that is not all that much different than what we have seen in Ames under Rhoads. With that said, let’s get right to it.

Iowa State dropped a close game to then #11 Kansas State 30-23. The Cyclones attacked the 38th ranked rushing defense of the Wildcats and racked up 215 yards on the ground and 31 minutes in time of possession. However, it was not enough to overcome John Hubert’s late touchdown and Jeff Woody’s purposeful fumble on 4th and short sealed the deal for the Wildcats.

Rutgers lost to UConn 40-22 after amassing 430 total yards but backing that up with negative nine yards rushing and six turnovers. The game was atypical for Rutgers, who ranks 38th nationally in turnover margin. Both Gary Nova and Chas Dodd took snaps under center and thus created a quarterback "controversy" that Rutgers coach Greg Schiano discussed earlier this week.

Iowa State vs Rutgers: A History

Iowa State and Rutgers have never met. They shared one common opponent this season, the aforementioned UConn, and the Cyclones won their matchup 24-20.

On paper Rutgers looks like the clear cut favorite in this one. Boasting the 14th ranked defense nationally the Scarlet Knights have an undersized, but aggressive, front seven that wreaked havoc on most Big East teams this season. Iowa State on the other hand has been hit or miss against aggressive defenses all season. There was the egg laying against Missouri and the struggle in the wind and rain against Oklahoma but there were gems against Oklahoma State and Iowa. And the one thing that all these defenses had that Rutgers is missing? Size.

Rutgers is small, in fact they boast one of the the smallest front fours that Iowa State has seen this season. At an average weight of 266 pounds Rutgers only beats out Texas Tech (259 pounds) Kansas (263 pounds) and UConn (265 pounds) in the size category. While Iowa State struggled against UConn on the ground they set school rushing records against Texas Tech and Kansas. 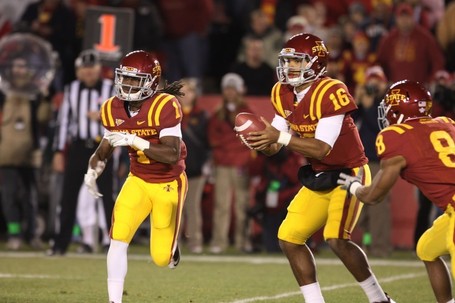 This mere fact leads into one of my keys to the game that I mentioned in my Big XII Bowl Preview last week: Dominating line play

Rutgers boasts one of the best pass defenses in the country and has been consistent all season long in forcing bad decisions with the pressure they bring on blitzes, especially up the middle. The best way to stem this tide will be to have a consistent rushing attack mixed in with underneath throws to keep the chains moving. Make no mistake about the Big XII and its defenses. Despite the ugly statistics involved, most Big XII teams had athletic and aggressive defenses that Iowa State had to prepare for week in and week out. So Rutgers’ speed should be nothing new to Iowa State. West Virginia and UConn were able to get outside consistently against the Scarlet Knight defense and expect the Cyclones to spread the field and get James White outside the tackles and test Rutgers’ defense in space. An ever improving Jeff Woody waits in the wings to lay some lumber when the tough yards are needed.

The next key is the one that Iowa State struggled with throughout the season: Turnovers. Rutgers lived the same nightmare Iowa State did against UConn by turning the ball over on their first two possessions. The difference between Iowa State’s win and Rutgers’ loss was how each team responded. Rutgers’ offense continued to sputter once their hole was dug and the Iowa State offense got over their turnover woes to control the clock and manufacture their points. Turnovers are bound to happen on Friday and if the Iowa State that played the last month of the season shows up then their perseverance will be key to having a chance to win. 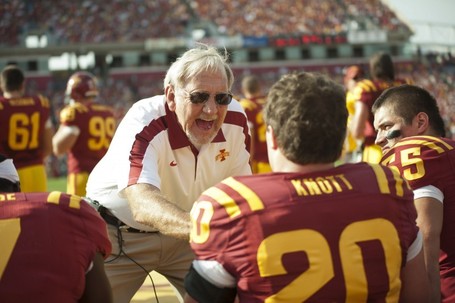 Despite the two quarterback rotation this season the Rutgers offense has still managed to move the ball downfield in key situations. Having a corps of receivers over six feet tall certainly helps this situation. Mohamed Sanu is not the only receiver that Rutgers will roll out on Friday that the Cyclones have to pay attention to. Sophomore Brandon Coleman has only caught the ball 16 times this season but five were for touchdowns. More importantly he’s 6’6" and will likely be matched up against Jeremy Reeves or Ter’ran Benton at times. This is not a matchup that favors Iowa State in the slightest. Sanu will be the focus and will still get his yards but the key will be to limit all of the Rutgers’ receivers from breaking too many long plays. Unfortunately despite the play of Iowa State’s secondary over the last six games of the season I will have to remain skeptical until I see how the rest of the defense steps up.

That again leads to our key on line play. Rutgers has allowed 30 sacks on the season and their line is largely regarded as questionable and inexperienced. They will face an Iowa State defensive line with three senior starters playing their final game in a Cyclone uniform and two defensive ends that have excelled at getting pressure on the quarterback for most of the year.

Early on look for Rutgers to establish the run and test the front seven of Iowa State. If this has similar results as the Kansas game then the Cyclones will be in for a long day as Rutgers has far more weapons at the skill positions than the Jayhawks have. However, if the run game does not get churning like in victories against Texas Tech and Oklahoma State, then look out. This defense could have a field day on whoever is taking snaps for the Scarlet Knights.

What Happens When... Iowa State is on Special Teams

This part of the game concerns me quite a bit. Minnesota pulled off a successful fake punt in the 2009 Insight Bowl that the Cyclones were not prepared for and I get the sinking feeling it may happen again on Friday. Greg Schiano has shown in the past he is not above using trick plays on special teams to set the tone so get ready for some fireworks. Paul Rhoads has also reached into his bag of tricks a fair amount this year. In reality the only things we have yet to see this year are a pass on a fake punt (Kirby Van Der Kamp still has the highest career quarterback rating on the team) and anything relating to a fake field goal.

Both teams have top 25 ranked kickoff return units but Iowa State ranks higher on the defensive side. With field position likely to play a huge role in this game, returns from Josh Lenz and Jarvis West could very well be the turning point.

Unlikely to Happen but We’ll Light a Dumpster on Fire if it Does: Current Season 5-7: Again I have really no idea what to put here. A win would not surprise me enough to light something on fire and a close loss would not send me into a fit of rage. So as a tribute to Mr. Steele Jantz, I will light a dumpster on fire if he comes off the bench in relief to snatch victory from the jaws of defeat. 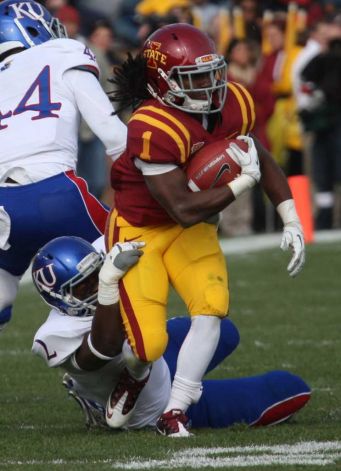 The outcome of this game has been the hardest to predict all season. Without seeing much of Rutgers week to week like the Big XII teams it’s hard to determine exactly where their skill level falls. Are they an 8-4 team that just narrowly missed out on the BCS or are they an 8-4 team because of a tremendously weak conference? On the flip side, I can say this 6-6 Iowa State team is head and shoulders better than the 6-6 team in 2009 that eventually won the Insight Bowl. The worst loss that Iowa State had in Jeff Sagarin’s rankings was to #17 Texas. The worst win was #78 Northern Iowa. Conversely, Rutgers’ worst loss was to #75 UConn and its best win was to #34 Cincinnati who was starting their backup quarterback. The assumption that Iowa State is more battled tested is quite true but with nearly a month layoff between games that factor will likely be minimized.

This game, almost more than any other, I feel is going to be won up front on both sides of the ball. Rutgers is going to be aggressive on defense and try and bait Jared Barnett into mistakes. As I mentioned above, this will not be the first fast and aggressive defense Iowa State has seen and with the small line that Rutgers has there will be yards to be gained on the ground if the offensive line comes to play. Having Brayden Burris and Ethan Tuftee will be huge for the offensive line and give them a possible rotation of nine deep so the jet tempo will likely make multiple appearances in Tom Herman’s final game as offensive coordinator.

Defensively I am concerned about the wide receiver corps that Rutgers has and how Iowa State’s entire secondary matches up against them. A lot of this will be mitigated by the linebackers covering deep over the middle but it can really be shut down if the defensive line takes advantage of a smaller offensive line and gets pressure on whoever is under center. If Rutgers fails to establish the run game and allows Neal and Lattimer to tee off then this game will start heading Iowa State’s way in the 2nd half.

Long story short, Iowa State cannot start the same way they did against UConn, Texas or Oklahoma State and expect to win. Early ball possession to establish the tempo will be key and the month off with extra work on ball security should help. The game will be close but in the end the good guys shall prevail and set the tone for what will be a breakout 2012 campaign.

PS – As always, your previews are welcome in the comments.

PPS – The benefit to not going to New York for the bowl game? It should be around 50 here in Iowa tomorrow and give us the chance for one final tailgate before the game.