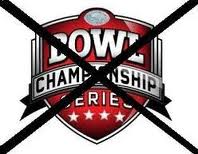 This weekend's events have given me reason number 143,675 why I'm glad I'm not a college football coach. How can you justify the BCS when any of your players ask about it? When the BCS is clearly all about money instead of who is deserving, how can you continue the charade that your players are STUDENT-athletes?

Here are the final BCS rankings:

And yet, here are your BCS bowl matchups:

We've all hashed on Oklahoma State vs. Alabama. Better slate of wins belong to OSU, but the better loss is Bama's. They're close enough in the polls that we really can't be incredibly mad with either choice. The hidden aspect here is LSU. They've beaten Alabama at Denny Bryant already, and now they have to do it again? So much for the regular season being the playoffs in the BCS system.

At least you can make the argument that Alabama is deserving of a shot. Is there anyone that thinks Virginia Tech is deserving? Even Frank Beamer was surprised. Kansas State finished higher than EVERY single ACC and Big Ten team, and yet, 2 teams from both of those conferences made it, while the best (at worst a tie for number one with the SEC) conference in football this year gets a single BCS participant.

Today's release of the coaches poll showed some very odd (and disturbing) things. Missouri's Gary Pinkel, Stanford's David Shaw, Air Force's Troy Calhoun, Duke's David Cutcliffe, Syracuse's Doug Marrone and Alabama's Nick Saban all had Oklahoma State lower than 3rd on their ballot. I realize that a lot of these are actually filled out by sports information directors, but this is unbelievable. You can claim Calhoun, Cutcliffe and Marrone are just crazy, but Saban and Pinkel are the perfect examples of clear bias. And while Les Miles' insanity is great on the field, it doesn't make for a sane ballot. Les decided to vote Michigan at #8, KSU at 17, Baylor at 19 and TCU at 21.

Meanwhile, the Harris Poll voters, which replaced the AP Poll in the BCS formula, tried their hardest to make the coaches look rational. Former Notre Dame player Derrick Mayes, former Hawaii coach Bob Wagner, and former Iowa SID George Wine ranked Oklahoma State #6 (Wine also had Houston ahead of Oklahoma State). Former Kentucky player Jeff Van Note had WISCONSIN AT NUMBER 3 and Oklahoma State at #5. Interesting note here that every voter who had Oklahoma State below #3 had Bama at #2. No agenda here at all.

It's sad to see Alabama and Oklahoma State fans trashing each others' teams when the real common enemy here is a system that forces us to do that. So please, let's have a playoff already. If nothing else, it will remind everyone that worthiness is settled on the field, not by a bunch of voters who are drunk, high, or half dead.

And if we can't have a playoff, at least replace the coaches poll with only Paul Rhoads' ballot.