The 21 Days of the Pinstripe Bowl

Share All sharing options for: The 21 Days of the Pinstripe Bowl

Without a game this week I was debating what to do for an article in place of my normal preview when it finally hit me. We’re three weeks, or 21 days, away from the Pinstripe Bowl so why not take this time to do a countdown of 21 Iowa State related things. Kind of like the Forde Yard Dash but way less awesome. This also serves as my way of recapping the season, hand out some postseason awards, preview Rutgers a bit (look for a better primer next week from Norman Underwood) and wax about Tom Herman leaving for Ohio State. So off we go…

21 is for Shontrelle Johnson, who underwent successful neck surgery two weeks ago and is now on his road to recovery. Obviously we wish Shontrelle the best in his recovery and the return to a normal life, but seeing him again on the football field would be great. It seems strange to say, but until Jeff Woody emerged as a viable option the offense lacked a strong inside presence when Shontrelle went down.

20 is for AP First Team All Big XII selection Jake Knott. Knott missed out on first team honors by the Big XII coaches when A.J. Klein was selected, but the media felt him worthy enough for placement on the same team as he was in the preseason. Despite Knott’s excellent year, and one that could have been better without injuries, my Cyclone Defensive MVP still goes to Klein. He stepped up when Knott was reeling and now the clear cut strongest linebacker duo in the Big XII belongs to the Cyclones.

19 is for the ranking of Texas Tech prior to their 41-7 loss to Iowa State on October 29th. The Cyclones went 20 years without beating a ranked team on the road and have now done it in back to back years under Rhoads. 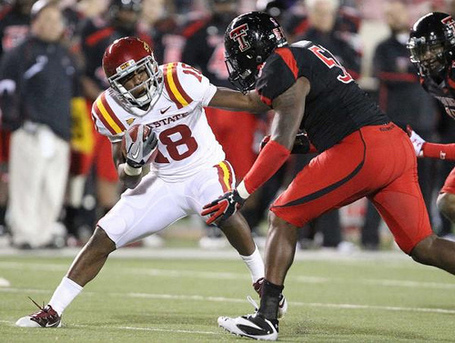 18 is for Albert Gary, my selection for Cyclone Offensive Newcomer of the Year. I am not bound to the same requirements as the Big XII so I hand this one to Gary who emerged as the playmaking, do it all receiver that Iowa State has been looking for since Marquis Hamilton graduated. Now Gary, please don’t go Jason Berryman on us and sit in jail for a year.

17 is the total offensive ranking for West Virginia, the highest in the Big East and the team that put up 41 points against the 12th ranked scoring defense of Rutgers. The next highest Big East team is South Florida at 31st, followed by Cincinnati at 56th (one spot below Iowa State) and then Pittsburgh at 84th nationally.

16 is for Jared Barnett who became the second Cyclone quarterback this season to begin his career 3-0, the fifth Cyclone quarterback in a row to win his first game as a freshman, and had the 3rd ranked Iowa State offensive output of all time with 460 yards against Oklahoma State. This man has a bright future with the right coaching hire by Paul Rhoads this offseason.

14 is for the points scored by Iowa State against Minnesota in the 2009 Insight Bowl, which was the Cyclones last bowl appearance and win. I’ll elaborate more over the coming weeks and in my preview on December 29th but I feel this game against Rutgers will be more similar to the 2009 Insight Bowl than many of us want. This concern developed even more once the news of Tom Herman broke and the possibility of a different play caller for the bowl game emerging.

13 is for Rutgers’ total defensive ranking at 314.4 yards allowed per game. As alluded to above, one has to question how legitimate this ranking is when only four teams in the Big East rank in the top 84 spots in offense in the nation.

12 is for the amount of teams that the Big XII was designed for. Whether or not this will ever change is up in the air but with the Big East making their expansion moves it’s probably now or never for the Big XII to expand if they were looking at either Louisville, Cincinnati, or both.

11 is for Jerome Tiller I guess. First Team All Big XII Gatorade Dumper! 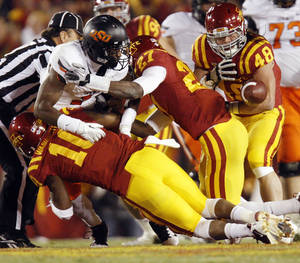 10 is for Jacques Washington, who is my Cyclone Defensive Newcomer of the Year. Washington was a stabilizing force in the back end when paired up with Ter’ran Benton and was charged with the responsibility of setting the defense as a sophomore starting his first collegiate games. It was great to see his case of the dropsies solved with his timely interception against Oklahoma State.

9 is for the number of conference games played by each team in the Big XII this season. It was definitely an exciting season and provided us with the opportunity to see the likes of Robert Griffin III, Brandon Weeden and Justin Blackmon in a year when we were originally scheduled to not have to play them. While the Cyclones would love to have the Baylor game back it was a fun game to watch at times and something that should be here to stay for awhile. I’m not sure about the rest of you but I have felt more invested in the Big XII this season than any other prior year. Divisions have their places, and is probably the only way for Iowa State to win a conference title, but the fact that everyone faces everyone else is a welcome change of pace.

8 is for James White, who gets my vote for Cyclone Offensive MVP. No one put together a more consistent and complete season than White and despite the strong emergence of Barnett and Gary it was White who really helped the offense go in tough spots. White finished the regular season with 150 rushing attempts for 701 yards and eight touchdowns to go with 21 receptions for 165 yards and one very epic touchdown.

7 is for the number of touchdowns scored by Darius Reynolds this season. Even more remarkable, look at when they came:

Baylor – 4th quarter – 28 yard pass from Steele Jantz – Most garbage of all touchdowns, probably gave a few fans some hope until the missed PAT after 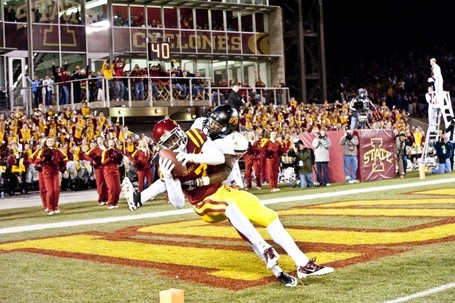 6 is for Rutgers’ national pass efficiency rating, which comes in at 104.09 (the lower the number the better). This rating is largely driven by the fact that Rutgers is intercepting the ball on 5.4% of passes attempted, which is good for one interception on roughly every 20 passes.

5 is for the number of wins by six points or less for Iowa State in 2011. UNI, iowa, UConn, Kansas and Oklahoma State were all won by a single possession. Even more absurd is the fact Kansas State won EIGHT games by seven points or less. The only thing that Bill Snyder can’t close on this well is death.

4 is for the number of consensus All Big XII selections for the Cyclones. Kelechi Osemele, Leonad Johnson, A.J. Klein and Jake Knott were selected to both the AP and Coaches All Big XII teams.

3 is for Aaron Horne, a favorite of the Preview and apparently a diamond in the rough as he was voted Big XII Newcomer of the Year by the Big XII coaches. Either someone reads our blog frequently and thought it would be a great idea to give him this award or it’s some kind of cruel joke.

The only thing smaller than Horne? His touchdowns, which came in at one against Kansas on a reverse.

2 is for the ranking of Oklahoma State when we… aw hell… I’ll just let this video do the talking.

1 is for the amount of wins that Paul Rhoads needs to reach an even 19-19 for his career and is also the number of games left this season and number of wins that the Preview still has left to predict.

Stay tuned for a few Rutgers primers next week and more coverage of the Pinstripe Bowl and Coordinator Search 2K11.