Share All sharing options for: The Big 12 as Beer

We here at WRNL know that everyone loves 2 things: clever comparisons of schools to other things, and beer. We have combined the two. Enjoy.

Iowa State: Grain Belt. No one outside of the midwest has ever heard of it, and it won't be winning any awards any time soon, but those who know it understand that despite the lack of respect, it's a simple, delicious, no frills beer.

Oklahoma State: Schlitz. It used to be horrible, but after getting a massive injection of cash and a whole new recipe, it's a very good beer. Still overshadowed by it's in-state big brother, but not your daddy's swill.

Oklahoma: Miller Lite. Popular, oppressive, but ultimately disgusting. No one can figure out why this shit is so popular, but it flies off of shelves nationwide. Popular with women.

Texas: Bud Heavy. The king of beers. It has more money than anyone else, and inundates everything. Brands itself as a man's drink, but it seems that most of the folks who swear by it are wanna be tough guys that don't really know anything about beer.

Baylor: Grape juice. They don't want to be like those heathen Catholics who use actual wine for the blood of Christ.

Texas Tech: Bud Ice Light. Contrary to popular belief, it actually exists. This awkward, pale, (and most likely a virgin) cousin of Bud Light and Bud Heavy combines the poor taste of Bud Ice with the ineffectiveness of Bud Light for one incredibly shitty beer.

Kansas: Hornsby's. Beer with the flavor of cider. For the lady (or Turner Gill) in all of us. 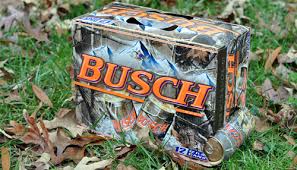 Missouri: Busch Heavy Camo Cans. Perhaps the most white-trashy of all beer packaging. It's ok Mizzou, you're still beautiful on the inside. Caution: overconsumption may lead to unbelievably bad Pick 6's.