WRNL & Rhoads: Match Made in Heaven

Share All sharing options for: WRNL & Rhoads: Match Made in Heaven

CycloneFanatic.com had their 2nd Annual Recruiting Party last night and members of WRNL were in attendance. We even got the chance to pick Paul Rhoads' pocket! 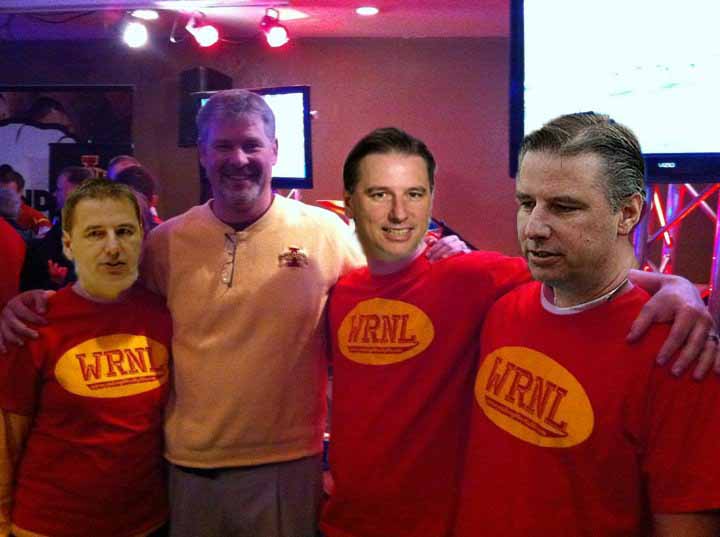 Much props to Chris Williams and CycloneFanatic.com, Cyclone Gridiron Club, Greater Des Moines Cyclone Club, and The Keg Stand for making the event possible. Everyone there seemed to have fun and the coaches were great to talk to. Also we cannot forget about Tron from Wilson Toyota. As Rhoads' personal bodyguard he struck fear into anyone who crossed his path.

A couple of notes from the night:

- Paul Rhoads apparently does not like PBR. As yours truly is a big fan of the beer and drinks large quantities of it before games I find this to be truly disappointing. My life's mission is to now have a PBR with this man. For those who were wondering, he was knocking back Miller Lite and Bud Light.

- Of course it wasn't all bad with Coach Rhoads. He started off the festivities by throwing $200 into the hats used to collect money for the Gridiron Club. In all, over $3,000 was raised last night that will go directly to the football team through the Gridiron Club.

- Shane Burnham is probably on his cell phone as we write this. That man has troubles putting it down.

- Tom Herman. Beer. Hilarity. The QB that wins the competition this year is likely the one that managed to drink him under the table. My money is on Jantz.

- Kenith Pope loves himself some chicken wings. He wasn't eating these things like a dainty little princess either. There was full on tearing meat off bone like Lattimer tears arms off quarterbacks. He was averaging at least one per minute.

- Wally Burnham is a joy to talk to, even if he did try to steal my wife. He is high on this year's defense but still a realist. The team is not where it needs to be up front and safety is a concern until at least the spring when they can get the guys back on the field. Lot of athleticism on that side of the ball that should start showing up in 2011.

If you missed out last night be sure to attend next year. These coaches are definitely the type of people you want to knock back a few beers with.