Pro Wrestling, About As Real As It Gets

Share All sharing options for: Pro Wrestling, About As Real As It Gets


Editors note: Against our better judgement the WRNL writing staff chose to untie our resident ass hat from the basement furnace. It's really cold outside, so instead of chasing the ice cream truck and dry humping neighborhood lawn ornaments, he chose to stay inside and watch TV. And fortunately for all of you he chose to write about it.

Ya Im back bitches, but this time Im not mad. I have found God, or what seems to be God (your sisters underwear drawer). Either way I come away totally satisfied.

This time you'll get no rant. I'm just here to talk about Pro Wrestling and set some things straight. Just the facts bitches!

If you can watch that video and still think Pro Wrestling is fake then you are severely mistaken. Shit's real, and Rowdy Roddy Piper will kick your ass in a heartbeat. 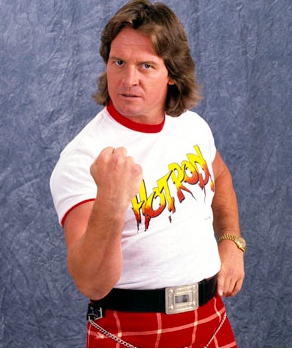 This is my fist. There are many like it, but this one is mine.Watching this video has proven to me that a masked man waving his arms like a snake can, and will, hypnotize anyone. And notice how it looks like he is taking his partners shaft in stride while waving his arms like a snake. Where I come from we've got a name for dudes who are willing to do shit like that: "Hawkeye fans"! And trust me, it's hypnotizing. Or so I've been told (Cyssormetimbers kisses and tells).

As you have all seen the poor white guys who were both hypnotized suddenly break out in a funky dance. And you guessed it, they do the worm. Both of them, even the fat one. Because what else do white folks do in the presence of minorities other than try to impress them with dancing skills? The fat one was quoted as saying "The face slide I did on the mat felt like my Moms vagina, rubbery and abrasive".

Prove to me Wrestling isnt real? It doesn't get any more real than this!