Share All sharing options for: Know Your Enemy 2011:  Aggie

This is the 2nd installment of this year's "Know Your Enemy" series. Last week we did Baylor. This week, we focus our attention on the lovable, and verifiably insane Aggies of Texas A&M. Now, Aggies, keep in mind that I love College Station and you guys were great hosts in 2009, but we're equal opportunity offenders, and you guys are fucking crazy. Don't be afraid to laugh at yourselves.

STADIUM: The Aggies take the field at venerable and massive Kyle Field, located in College Station, Louisiana. No. Wait a minute. College Station is in Texas. That's right. No matter how bad the incredibly delusional Aggie fans want them to be, A&M isn't in the SEC and probably never will be. Now why would A&M fans be crying and screaming to get into a conference which would guarantee they never have a winning season again? Because Aggie fans have the world's largest inferiority complex with Texas. This will be explained later. A&M is also the oldest Service Academy west of the Mississippi. Wait. They aren't a Service Academy either (but don't tell them that).

A shining monument to insecurity and delusion. 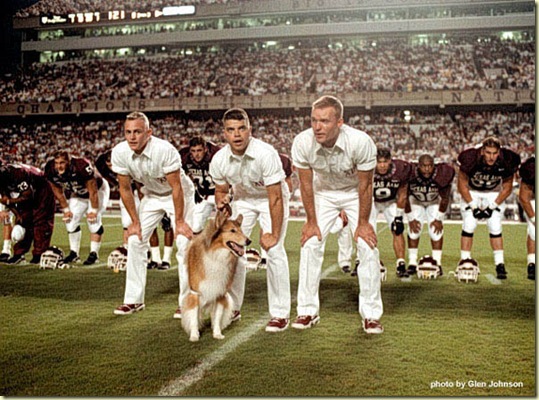 Lassie's practically begging for it, that tramp.

MASCOT: A&M refers to their teams as the "Aggies". We don't really know what an Aggie is. We do know that it isn't a Collie. 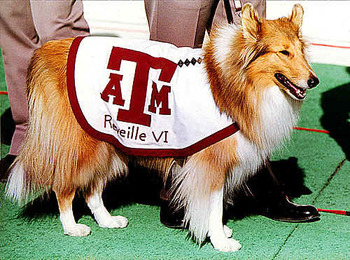 Like most A&M traditions, the story of how a Collie became the mascot for the Aggies probably follows as such:
Back in 1935, some Cadet leader got drunk at the Dixie Chicken (a bar in College Station that is the nexus of all Aggie tradition). Unable to find a girl to take home, he banged a Collie. In the morning, when he woke up, he tried to let the Collie down easy and explain that he wasn't interested in a long term relationship. The Collie responded "hullabaloo, caneck caneck". The Cadet leader yelled "Gig EM!" and decided to enter a long term relationship with the Collie, bringing her to every game to cheer from the sidelines. Thus, the tradition has not ended.

TEAM: A&M has a good squad, lead by one of the Big 12's best QBs, Ryan Tannehill (who used to be a WR). They will probably beat ISU. What more do you want? In-depth analysis and fact? Not up in here.

NOT UP IN HERE!

AGAINST ISU: The series is something like 1-6. It could have been 2-5 if Tony Yelk wasn't an awful place-kicker. Todd Blythe face-raped A&M back in '05. Probably won't have a shot at beating them this year.

What a great day.

TRADITIONS: I could write for a day and not even scratch the surface of all the inane traditions that the Aggies have. Some are cool, but most are just unbelievably stupid. We'll start with the obligatory Texas School Hand Signal.

Now, all Texas Big 12 schools are required to have some kind of stupid hand signal. I think it's to recognize each other out in public, or so they feel better about whatever insecurity exists in Texas that makes Texans so unjustifiably proud of being Texan. A&M's signal is particularly stupid. It's better than Baylor's "Sic 'Em", but that's not saying much. It's just the act of giving someone a thumbs up and yelling "GIG 'EM".

The next two Aggie traditions (that are actually alright) are kissing your significant other after an Aggie score, and the whole crowd swaying while singing the fight song. Kissing your significant other is likely a public display that said Aggie is a heterosexual (because being gay in College Station is probably akin to being Jewish in Berlin, 1939). The swaying of the crowd during the fight song is cool, and I don't really have any jokes to crack about it. This is a pretty crappy video (taken by a Nebraska fan, so go figure), but it kind of gives an idea.
[youtube]DTA7jgFjzpo[/youtube]

The fight song thing leads us to the last Aggie tradition we will discuss: their inferiority complex.

Everything at A&M is centered on how much they hate the University of Texas. It imparts everything they do, and is the fiber of their being. This is the reason they wanted to go to the SEC, even though it meant the inevitable end of their program being competitive. They hate Texas so much that the lyrics to their fight song are solely focused on beating Texas. Listen and see for yourself:
[youtube]M3XkxbIQ_Mo[/youtube]

This Texas obsession also reveals itself by Aggies making up words (this is obviously where George W. Bush learned how to do it. "Strategery" anyone?). I mean, what the fuck does "hullabaloo, caneck, caneck" even mean? For example, they refuse to call the University of Texas, the University of Texas. They call it Texas University. I know. A real zinger, right? They also refer to Longhorn fans and alumni as T-Sips. This is supposed to be some kind of damning insult, but apparently it just means that while Aggies were plowing fields and fighting wars, Texas fans were sipping tea in Austin. Damn, Aggie, you sure got them on that one.

Thus, as you can see, at a university where weird traditions inform every fabric of their being, the definining tradition is that of an unchecked inferiority complex.

We can only assume that it's the result of the Dixie Chicken, some dude in the '30's, and possibly a molested dog.