We were in the middle of doing some blow off an underaged hooker's ass in the Bahamas when we were alerted of breaking news from the Heartland, and have answered our journalistic reponsibility to warn anyone who was potentially in harm's way.

The Lattimer Awareness Office at WRNL headquarters has received notice that Lattimer is advancing on Des Moines.

THIS IS A RED ALERT.  We repeat, THIS IS A RED ALERT.  Anyone who is located along the path between Ames and the Iowa State Fairgrounds in east Des Moines is advised to take shelter in their basements, or if a basement is not available, a bath tub or similar sunken structure close to the interior of the nearest structure. 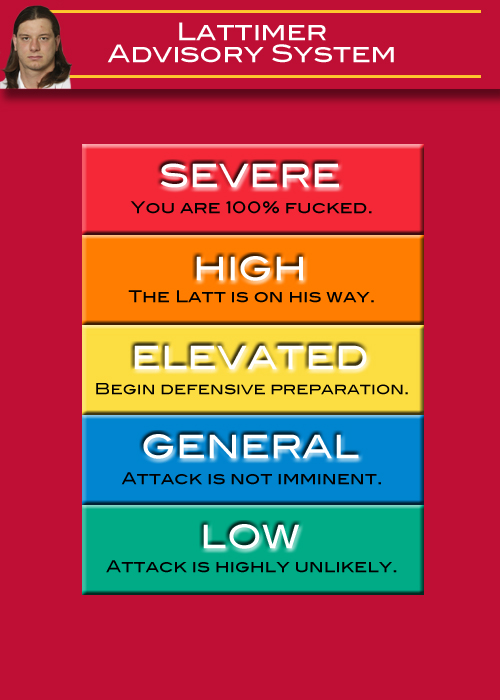 Sometime around 11:00 AM Central Standard Time, Lattimer became aware of the abortion known as the new Cy-Hawk Trophy, which is being unveiled at the Iowa State Fairgrounds on the east side of Des Moines.

The Latt is now on the warpath to crush the creators of this disgrace, the trophy itself, and anyone who stands in his way.  Apparently the Latt is even more enraged that the Iowa Corn Grower's Association ignored his suggestion for the trophy, which was a bronze replica of Tom Arnold and Roseanne banging.

This is the first Red or "Severe" alert that has been issued, and we can only speculate on the extent of the damage.  We can guarantee that the damage will be widespread, and severe.  Damages could range from decapitated heads stuffed into asses, eaten faces, severed appendages, and several "Texas Chili Bowls" to the complete and utter destruction of the east side of Des Moines (which quite frankly might be an upgrade).  We don't know what a "Texas Chili Bowl" is exactly, but we assume it looks something like what The Latt did to Garrett Gilbert.

Take shelter Des Moines, and may God almighty have mercy on your souls and the souls of those poor bastards who created the new Cy-Hawk Trophy.