People say stupid things on the internet all the time, just read any article on this site and you'll figure that out pretty quickly.  Texas A&M fans however, take it to a whole new level - oh and they yell it too, that's their thing, they yell while wearing pretty collared shirts and no girls allowed dammit.

So for your amusement we took five minutes to gather five random fucked-up message board posts from Aggie nation.  A 'special' thanks to TexAgs.com for their ummm... help.

1) "As you state simply, you ain't a Corps guy. Means you don't understand leadership/followership in this context. Your choice but your opinion means little in this thread. A few ~800 fish classes and we take back the Quad. Good Bull."

Yeah buddy, you get those fish.  I assume in this context "followership" involves getting prison-raped in locker room shower, am I close?

2) "I've always regarded anything east of IH-35 "The South" or "Southern". I would not regard places like San Angelo, Amarillo, the Permian Basin as apart of the "South". In my view, Texas' claim to being a "Southern" state is based by the fact that it was apart of the CSA. Antebellum Texas may have had 46 inhabitants west of Austin!!!"

The South is pretty fucked up, this post is as well, ergo ... 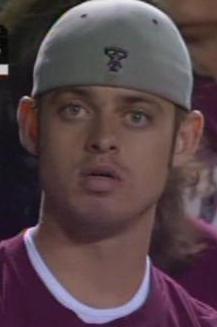 3) "Painted overalls are just classic, maroon tee (to achieve maximum ammount of maroon in the stands), khaki shorts or jeans and last but certainly not least a 12th man towel hanging out of your back pocket."

We've just got to achieve that maroon maximum!  Enzyte can help.

4) "It's going to suck when they run away from their computers because their aunt's cousin's cat has a fur ball problem. I really would like to enjoy their muy-style meltdown."

This guy is referencing Texas fans, and how they will abandon their message boards if A&M beats them again.  I'm not debating the truth, I'm marveling at the oddness of word choice.

5) "What the heck gets you banned? I've always tried to be courteous, non-offensive, keep a level head, and don't disparage the players, coaching staff, or texags staff. This is common sense.  I've never been banned, so I'm wondering about all these, "I've been banned" types of posts. What the heck?"