Share All sharing options for: 2011 Game 4: Iowa State vs Texas 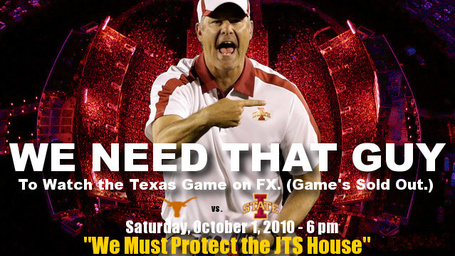 A win this weekend will undoubtedly put Iowa State into the Top 25 in both national polls and setup a matchup with Baylor in Waco that no one before the season thought would be even remotely intriguing.

But before any of that happens the Cyclones have to get through the Longhorns and it won’t be a surprise like last year.

(Editor’s Note: This is where we tell you that we correctly predicted the upset in Austin last year.  Not a big deal or anything, we just like patting ourselves on the back over something that isn’t related to hookers and blow)

Texas began their Tour of Revenge by going to the Rose Bowl and dismantling UCLA 49-20.  Texas took three early interceptions and converted them into 21 points and never looked back.  The next generation McCoy-Shipley connection was in full force with Case McCoy connecting with Jaxon Shipley for one key conversion after another.

Iowa State vs Texas: A History

Until the victory in Austin last year there really was no history.  While the Cyclones play the Longhorns significantly closer than they do Oklahoma historically; they still had not beaten the Longhorns until last year’s matchup in Austin.

The Man They Call Steele came crashing back down to Earth in his first road game two weeks ago but it wasn’t all bad.  Despite the aforementioned slow start, Jantz still managed to throw for 200 yards and a touchdown while going 18 of 25 to finish the game.  While Jantz is deserving of a Jekyll and Hyde moniker for the performances we have seen to date it is probably more appropriate to note that his two worst games came in his first start and his first road game.   This leads to our first key for the game this weekend against Texas.

Jantz gets better as the game wears on and with that so does the offense.   In all three games this season the Cyclones have turned the ball over in the first quarter and dug themselves a hole on the scoreboard.  The defense kept the dam from breaking but in the Big XII this will only work for so long.  Jantz and the rest of the offense will have to play in control, hang onto the ball and not play themselves out of this game like UCLA did two weeks ago against the Longhorns. 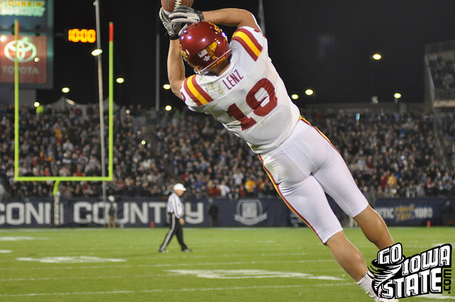 Texas clearly did not respect UCLA’s passing game and was consistently releasing 7 or 8 players to stop the run.  A similar situation happened in the UConn game where the run game was thoroughly hit or miss.  Up until James White scored on a 26 yard touchdown run in the 2nd quarter the Cyclones had gained -3 yards on the ground (not including sacks).   Iowa State finished with 101 yards on the ground in the game.  Expect a similar gameplan from Texas as both Tom Herman and Steele Jantz have not shown the ability to win a game when the running game is completely taken away.

However, with a gambling defense comes opportunity.  UConn had been pinning their ears back and attacking gaps until Josh Lenz ripped off his touchdown pass to Darius Reynolds on a reverse.  After that UConn started gambling less, used a more conventional four man rush and both the running and passing lanes opened.

UCLA did next to nothing to take advantage of Texas’ aggressiveness.  Instead they played themselves into situations where they forced the ball into coverage and Texas’ fast, but inexperienced, secondary made the most of it.  UCLA did have some success with the zone read and getting both Richard Brehaut and Kevin Prince to the outside when Texas over pursued.   This is where Iowa State must succeed where UCLA failed.  Quick screens and hitches to the outside mixed with a cadre of inside runs will keep Texas honest and punish them for running downhill so often.  I would not be surprised to see the Cyclones mix in some misdirection similar to what Texas’ offense does to test the discipline of the defense early.  Iowa State took advantage of a disrespectful and lazy Texas defense last year to win in Austin and will need to rethink their strategy to take advantage of a defense just as talented but much, much more aggressive.

The young Texas offense (8 starters are underclassmen) has started to hit a groove once Case McCoy gained the reins.  Mack Brown is gambling with playing David Ash for as many snaps as he is but would probably be gambling more if Garrett Gilbert was still healthy.  Whoever they would go to for a third string now would still be light years ahead of Gilbert.

Much of the credit should be given to new co-offensive coordinator Bryan Harsin for brining his experience from Boise State and coupling it with oodles of talent.  The offense that Texas has shown so far in 2011 is a far cry from the stick in the mud and inconsistent play calling from Greg Davis.  Getting rid of Garrett Gilbert probably helped too.  Maybe a little.

What makes Texas tough to prepare for (and tough to preview) are the multiple looks they have shown so far this year.  Five different men took snaps from center against UCLA and this is not even the base part of their offense.  They’re in the midst of going back under center again and lining up in a more conventional way that allows them to run Freshman running back Malcom Brown downhill.  Brown has run for 264 yards and a touchdown this season and averages 5.1 yards/carry.  However, the most consistent threat has come from getting Fozzy Whittaker outside.  Texas has been able to get the ball into his hands and space and it’s resulted in four total touchdowns for Whittaker. 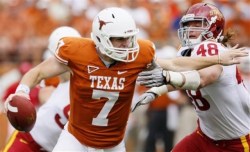 Like the previous three games Iowa State is going to have to line up to stop the run early and force Case McCoy into 3rd and long situations.  Unfortunately as we have seen against mobile quarterbacks Tirrell Rennie and Scott McCummings, Iowa State struggles with keeping contain on a quarterback with good feet.  The best way to counter this is going to be the exact same way Texas plans on countering Steele Jantz: blitzes up the middle with contain on the outside from the defensive ends.  The only problem is Texas defensive ends Jackson Jeffcoat and Alex Okafor are quite a bit better than Patrick Neal, Jake Lattimer, Willie Scott and Rony Nelson.

Iowa State will not be able to keep Texas out of the end zone so the focus must be on minimizing big plays and forcing turnovers in the red zone like in 2010.  The discipline required against Texas’ offense will not be all that much different than the discipline needed to stop a true option offense like Navy’s or Georgia Tech’s.  Thankfully two weeks to prepare for the Longhorns will go a long way to helping they Cyclones’ chances.

I do not normally do this but I will let the Des Moines Register do my talking on this one.  It highlights one of the biggest reasons Iowa State has managed to start 3-0 despite being -5 in turnover margin: field position.  Josh Lenz and Shontrelle Johnson both rank in the Top 5 in the Big XII in kickoff return average and Kirby Van Der Kamp is off to a torrid start punting the ball.  The only thing left is finding a kicker with some consistency.  The Cyclones are 2 of 5 on field goals this year.

WRNL Lead Pipe Action Prediction: Current Season 1-1-1: The first quarter is kind to the  Cyclones as they score their first touchdown in the first frame this season.

50/50 Prediction: Current Season 0-3: Aaron Horne scores his first touchdown as a Cyclone.  Has to happen one of these games, right?

Unlikely to Happen but We’ll Light a Dumpster on Fire if it Does: Current Season 2-1: I owe you two dumpster burnings after the two wins the past two games but I hope it will be three after this weekend.  I have mixed feelings on this game which you will read more about below, but this one is following the same format as the previous two games.  We’ll burn a dumpster if: The Cyclones pull out the win and enter the Top 25 for the first time since…

October 1, 2005 when Iowa State traveled to Lincoln to take on Nebraska.

Iowa State could very well lose this game by two touchdowns.  The current line is at -9.5 and has barely moved since it was posted in Vegas earlier this week.  Texas has a long way to go to prove it’s back to the consistent 10-win territory but the injection of five new assistant coaches and two aggressive and knowledgeable coordinators has given the Longhorns new life early in the season.

However, we have seen Texas at their best as they put up 49 points against UCLA on the road behind 28 points scored of four UCLA turnovers.  We have yet to see Iowa State play their best football and even in the win over iowa the Cyclones were -2 in turnover margin.  As mentioned above, the key to this game will be turnovers and it will be especially key in a first quarter that has not been kind to Iowa State.

If there is one thing Iowa State does better than Texas so far this year it’s discipline and while Texas has the speed to erase most of their mistakes they may end up making too many to come back from.  Tom Herman has had two weeks to prepare a gameplan that Texas has not prepared for or has seen and some wrinkles could very well be in store for a gambling Longhorn defense.  Defensively, Iowa State lacks the speed to match all of Texas’ weapons but as mentioned above, if they remain disciplined and take an approach similar to that used to defend the option then big plays should be minimized and allow them to keep the offense in the game until the end.

Despite the momentum of a 3-0 start I do not feel as confident picking this game as I did for the game in Austin last year.  The Cyclones took a team down there with nothing left to lose after two abysmal games and played like it.  This year that mentality has been there for the most part but they have not faced a team of Texas’ talent yet.

However, games are not played on paper and one thing I do know is I will be drunk, loud and ready to go 4-0 for the first time since 2000.

PS – As previously stated, Texas is favored by -9.5 in this one.  Bet with your head here, not with your heart.  Over/Under is 49.5, I have this barely beating the over but with the youth of Texas’ offense and the inconsistency of Iowa State’s I would probably say the under is the safest bet.

PPS – Texas will undoubtedly be more prepared on special teams than they were a year ago and I am nervous they might actually get a good fake pulled out on the Cyclones.  Rhoads will probably call this one pretty close to the vest and any tricks will likely come from the offense.