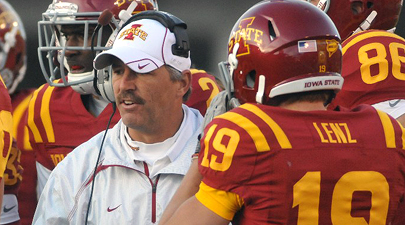 And stability is important for a program like Iowa State, entering the fourth year of Rhoads' tenure with a small athletic budget and without a vast winning tradition. At this point, the team is comprised mainly of players Rhoads' staff has recruited, players who know the offense that Tom Herman installed. Promoting Messingham to offensive coordinator is a safe move, one designed to keep players comfortable with their offensive responsibilities.

But among some fans, there's a sense of uneasiness about this hire, perhaps stemming from the desire for a more experienced play caller or someone with a different offensive sensibility than Tom Herman. But Courtney Messingham has been an excellent coach for Iowa State, and his rapid rise from tight ends coach and special teams coordinator to wide receivers coach and now offensive coordinator has borne this out. After the jump, a look at three reasons why Courtney Messingham will be a good director of Iowa State's offense for the forseeable future.

Continuity Principle: As mentioned above, continuity is probably the biggest reason for Messingham's promotion to offensive coordinator. Paul Rhoads specifically stated before the offensive coordinator search started that "We're not going to change. We're going to find somebody who conforms to us rather than conform to him. It's easier for one to conform to 50-some than it is the other way around."

From that point of view, Messingham's hire makes a lot of sense. Maybe too much sense. Messingham has been involved in multiple phases of the offense since coming to Iowa State in 2009, and has learned the intricacies of Herman's spread in that time. He's basically the quarterback's coach on the sideline during games, so transitioning to that new role shouldn't be an issue for Messingham. He's basically had on-the-job training for the past three years.

The problem is that when the rest of the Big XII is scoring an average of 32.0 points-per-game, 23.5 PPG isn't going to cut it. But that scoring number is probably going to take a jump upwards next year, and the year after that, based on the improvement seen over the past three years. That's the beauty of having a stable coaching staff. Players aren't spending time learning new terminology, blocking schemes or route combinations. They're improving on what they've already learned, and having Coach Messingham continue to mentor these players and help them grow is the best thing about his hire.

Hot For Teacher: If there's anything that Paul Rhoads has stressed in his time in Ames, it's player development and continuous improvement. At this point, it's basically an OCD-level disorder, with Rhoads' papering his bathroom with posts from Football Outsiders and avoiding the cracks in the sidewalk lest stepping on them screw up his player's training routines.

So it's no surprise that Rhoads values having good teachers on his staff. And besides Wally Burnham, there's no better teacher of the game among Cyclone coaches than Courtney Messingham. When announcing the move, Rhoads stated, "We need position development all over the field. Courtney will be a great teacher for the quarterbacks and I feel he will make a big impact in that area."

Again, this is an area where Messingham's promotion to OC will hopefully provide a boost to the offense. Tom Herman was widely seen as a schematic whiz, but may not have been the best teacher in the program. With Herman's system already in place, Messingham can focus on the details of the offense with players, helping them learn their roles and assignments better than they were previously.

Are You Experienced? Look, the Iowa State coaching staff has experience. Between Wally Burnham, Bill Bleil, Kenneth Pope, Paul Rhoads and Messingham, the Cyclone coaches have approximately 300 years of experience teaching guys how to play the game of football. There's no question that Messingham's 22 years as a coach, including seven years as an offensive coordinator at Missouri State, Iowa Lakes and St. Ambrose will help him transition to his new role at ISU.

The problem is with the results of Messingham's previous stints as an offensive coordinator. Statistics are hard to come by, but taking a look at Messingham's stretch as OC for the Missouri State Bears from 2000-2002 can provide some insight.

In 2000, Messingham's first year in the position, Missouri State scored an average of 21.5 points per game, good for second-to-last place in the Missouri Valley Conference. Starting quarterback and Ohio State transfer Austin Moherman completed 155 of 296 passes for 1,919 yards.

In Messingham's second year as the Bears' OC, the offense took a significant step forward, scoring an average of 27.0 points per game (second place in the MVC) and rolling up 432 yards per game, the league's best offensive production. Senior QB Moherman completed 153 of 264 passes for 2,045 yards.

In 2002, Messingham's last year as Missouri State's OC, the offense regressed to score an average of 23.2 points per game; good for third best in the Missouri Valley Conference but significantly behind league leaders Western Illinois and Southern Illinois. Quarterbacks that year combined to complete 166 of 305 passes for 2,035 yards.

Overall, this isn't an especially encouraging resume. While Messingham has plenty of experience as a playcaller, the numbers aren't gaudy in the way that Tom Herman's were when he came to ISU from Rice. But that's the thing. Messingham won't be installing his offense, he'll continue to teach the Iowa State offense. The one that the players know and have already bought in to. When Oklahoma State coach Mike Gundy needed a new playcaller after Dana Holgerson left for West Virginia, he didn't hire a coordinator with an established system. He brought in Todd Monken to specifically learn Holgerson's system and it paid off with a 12-win season last year.

So while Courtney Messingham's promotion to offensive coordinator isn't the flashiest hire, it's probably the safest one for Iowa State. Rhoads knows exactly who he's getting in a coach, and the players know exactly what to expect on the field. The Cyclones should improve in 2012, just like they have for the past three years.