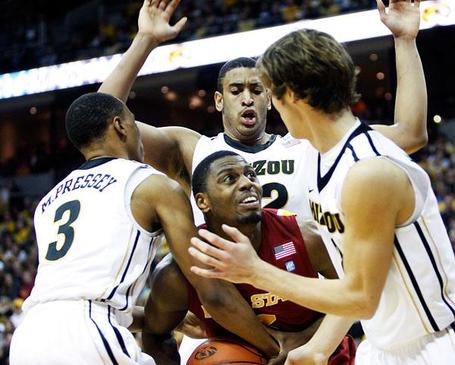 Not since the ’99-’00 team that played in the Elite Eight has started 3-0 in conference play. The Cyclones currently sit at 2-0 and welcome in , perhaps for the final time to Hilton Coliseum tonight in . The Tigers come into the game ranked #9 and 14-1 on the year after dropping their first game of the season on Saturday to .

Tonight’s game features the top three-point shooting teams in the Big 12, but the battle inside might end up determining who comes out on top. is down to seven scholarship players, only two of which are true post players. on the other hand has ridden the playmaking ability of reigning Big 12 Rookie of the Week, Royce White, to a hot start in league play. The 270-pound bruiser is second in the conference in rebounding, but his passing helped him notch a triple-double against Texas A&M on Saturday.

The Cyclones have picked up the intensity defensively, and they’ll need another solid effort in tonight’s contest. Though Missouri lacks depth and won’t hurt you inside, the five guards that they do play can all light up the scoreboard and can’t be left open. Iowa State has to contest the outside shot and not allow Missouri any second chance looks. Long shots = long rebounds, so all five Cyclones must box out their man.

Given Missouri ’s lack of size, it will be interesting to see what type of line ups Fred Hoiberg will throw on the court. Offensively, it makes sense to go with more size, but on the defensive end, Percy Gibson and Anthony Booker could become liabilities. I expect Melvin Ejim to see significant minutes in tonight’s game as he provides the most versatile option on both ends of the floor.

On the offensive end of the floor, Royce White needs to keep doing what he’s doing and get guys open looks. Expect Missouri to double-team and shade White all night. It will be up to the other four guys on the floor to find the open spots and cut to the basket when their man helps on White. If ISU can limit the turnovers and force Missouri to play straight up man-to-man, White could have another big night with plenty of one-on-one opportunities.

Missouri can shoot the three very well. They shoot 40.7% as a team on the year and seniors Marcus Denmon (44.7%) and Kim English (53.8%) are almost automatic from outside. If those two can get going, it could be a long night for Iowa State .

Missouri ’s lone low post threat is senior Ricardo Ratliffe. While not a focal point, Ratliffe is knocking down 76.9% of his shots! He thrives off of the penetration of the guards and is a guy who can do some damage on the glass as well as he sits at 5th in the league in rebounding.

Speaking of rebounding, Missouri would like to forget about Saturday’s performance in Manhattan . The Tigers were dominated on the glass, yielding an astounding 46-27 margin to Kansas State . If Iowa State can replicate those numbers, things will not go well for Missouri . Despite Missouri ’s issues on the glass, they’ve been able to overcome that weakness by creating turnovers. Missouri ’s quick guards force 9.47 steals per contest and have a turnover margin of +5.8 over their opponents. Don’t be shocked if the Tigers do a lot of trapping and mix up their defenses on each possession.

This should be a very entertaining and high scoring game. As a lifelong Cyclone fan, it’s going to be a little weird knowing that tonight’s game very well could be the last time Missouri visits Hilton Coliseum. There have been some incredible games etched in all Cyclone fan’s memories in this series, and this game looks like it could be another classic. Missouri’s senior-laden team won’t lay two eggs in a row on the road and should put forth a much better effort, but I think Iowa State matches up surprisingly well. Cyclone sharpshooter Chris Babb has proven that he is also a lockdown defender and will likely spend time on Denmon and English, and sparkplug Tyrus McGee will hound Denmon for abbreviated stretches off the bench. Ultimately, Iowa State ’s depth and a frenzied home crowd will be too much for Missouri , and they’ll drop their second straight road contest. If you’re going to the game, set your DVR, because you’re going to want to watch this one again. The Cyclones pull the shocker and start 3-0 in conference play for the first time since 1999-2000.