The Flight of His Life: A Keiton Page Story

Share All sharing options for: The Flight of His Life: A Keiton Page Story 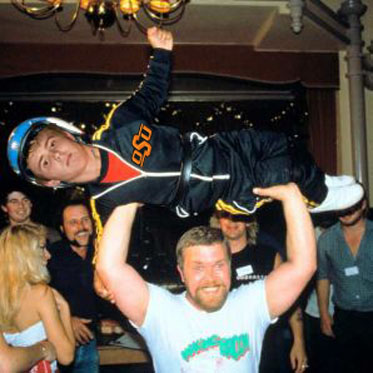 The life of Keiton Page is no tall tale. Despite his diminutive size and lack of physical gifts, Page has blossomed into an accomplished Division 1 basketball player.

This isn't a story of a hardwood hero though. This is a story of a young man who's been tossed around his whole life; someone who was in need of being picked up off the ground and ultimately, someone who's been propelled to new heights and distances that many never thought were possible.

In sports, nobody wants to be short. Coaches and scouts covet height and length and we as fans have a fascination with the size of the athletes we cheer for, especially in the sport of basketball. How many times in your life have you ever heard someone say, "he's tall, I wonder if he plays basketball?"

The fact that Page has achieved the success he's had for the Oklahoma State Cowboys defies most odds, but it's his mindset that has allowed him to succeed.

"I've always viewed my size as an advantage," said Paige. "Yeah, my feet dangle when I poop, but I still can play in the McDonald's Playland. All of my other friends had to stop when they were 8 or 9 because they got too tall."

In an otherwise meaningless non-conference game in December, 2008, Page's "advantage" led to opportunity. An opportunity that has come to define Keiton Page the half-man.

Page found his true calling in the ancient pub sport of Dwarf Tossing.

Paige was first introduced to Dwarf Tossing by Jeffrey Turner, a long time Cowboys fan, and Dwarf tossing champion. Turner comes from a long line of Dwarf tossers and first eyed Page's potential during his freshman year in Stillwater.

"I saw him flying around all over the court and then he dove for a loose ball and he had the most perfect form. I just knew I had to toss him," said Turner.

Turner continued, "Keiton is one of the best flyers in the business, but he's so humble and grounded. Well, grounded probably isn't the best word, but you know what I mean. He never comes up short in the clutch...shit, I did it again. With is work ethic, there's no task that's too tall. Damn it, I give up."

For those unfamiliar with the sport, Dwarf Tossing is as simple as it sounds. Several normal-sized people load up on booze and start tossing little fellas across the bar. Whoever throws their miniscule missile the farthest wins.

Naturally, Page is a flyer, the term for the dwarf that's being tossed.

Paige said being a flyer isn't as easy as it sounds. He must maintain a strict diet of cram and petty-dwarf roots to keep his weight down. He also said that watering down the drinks of his tossers is key.

"Dwarf tossing is very dangerous and it only makes matters worse if your tosser is drunk," said Page. "I've been thrown threw tables and into spectators and one time I was even thrown straight up into the air right into a ceiling fan."

Flyers are equipped with pads and a helmet to prevent injuries, and as technology has progressed, now commonly wear two straps with handles near their shoulders and their lower back for throwing ease.

As much fun as this sounds, some people detest the sport and vehemently protest its ongoing existence. The National Association of Little People has condemned the activity, saying it's "inhumane" and "cruel".

Page doesn't see it that way.

"When you're this small, people are always picking you up anyway and tossling your hair and slurring movie quotes like, ‘get in my belly'. If I'm going to be picked up and tossed around, I just figured I'd want it on my own terms".

Page added that he's paid very handsomely and has developed some kindred friendships with other flyers.

"I used to ask God why he forgot to make the rest of me, but now I see," said Page. "I'm a dwarf and dwarves are meant to fly."