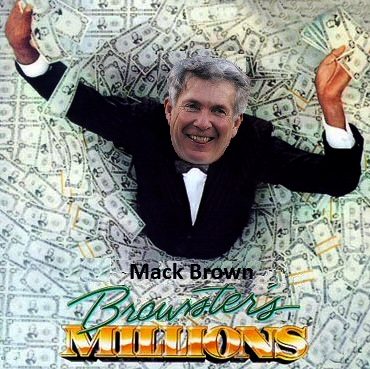 Mack "Brownster" Brown is a simple guy. Loves football, loves Texas and loves coaching, despite not being especially good at it. But unknown to him, Brownster has a wealthy benefactor; the University of Texas athletic director DeLoss Dodds. In order to find out if Brownster knows the value of money, DeLoss has a little proposition for him...

DeLoss Dodds: Let me tell you a little story, Brownster. When I was seven years old, my daddy caught me smoking a cigar. Locked me in a broom closet for two days and two nights with nothing more than a box of cigars and a book of matches. No food Brownster, no water, just those goddamn cigars. Wouldn't let me out till I finished every last one of them. Taught me a HELL of a lesson! So I'm gonna do what my daddy did to me. I'm gonna waste as much goddamn money as possible to prove a ridiculous point!

So here's my proposal: I'm giving you a four-year extension on top of your already ludicrous contract. That's nine more years at $5.2 million a year, with guaranteed $100,000 annual raises.

DeLoss Dodds: Of course there's a catch! You have to spend the money, but after nine years you're not allowed any more assets. That means no national championships, no conference championships, nothing but what you came to Texas with! Now, you can hire anybody you want. Hell, rehire Greg Davis for all I care! But you can't get value for your dollar.

Oh, I know what you're thinking. You'll buy a new iPhone for each recruiting call, then flush it down the toilet?

DeLoss Dodds: Wrong! That's MY thing! You can't do it!

Look at your players. You have four and five-star talent at every position on the field. I want to know if you can run Malcolm Brown into eight-man fronts until he's a rusted mess of flesh and bone? Can your indiscriminate waffling between Case McCoy and David Ash confuse both quarterbacks so much that they end up throwing more picks than touchdowns?

Now 13-12 is a good start. But I want more Brownster. I want you to charm the pants off recruits. I want you to charm the dollars out of donor's wallets. But I don't want wins. I want Texas fans on the hook for our fancy new network, stadium expansion, platinum-covered goalposts... literally anything that pops into my head when I'm in one of my ether-soaked deliriums. But mediocrity is the name of the game.

Can Brownster successfully keep the Texas Longhorns from a conference championship despite having the largest athletic budget in the nation, top-five recruiting classes and their own TV network? Will upstarts like Iowa State and Baylor succeed in beating Texas on a regular basis? Will DeLoss Dodds have another drug-induced freakout and extend Brownster's contract again? Tune in for the next nine years to find out!