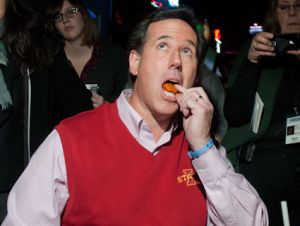 While we here at WRNL are not allowed to officially endorse any political candidate or party*, because frankly, we don't want to be associated with any of them. We're just relieved that it ends tonight, and everyone heads for South Carolina and Santorum leaves us the fuck alone while were trying to watch the goddamn bowl game.

We do, however, support any opportunity to get good and drunk. With that in mind, here are tonight's official "WRNL Loves the Caucus Drinking Game." Rules are very simple:

LETS GIVE THIS WHOLE PROCESS THE AMOUNT OF RESPECT IT ACTUALLY DESERVES!

(*We have written-in "Troy Davis" on our ballots in every election except 2006, when we just scrawled "Fuck The Hawks" across the page in giant letters, drew a fire-breathing gnome sitting on a mushroom toking up in the "Do not write here" space, dropped a biohazard-level fart in the polling booth, and walked out.)