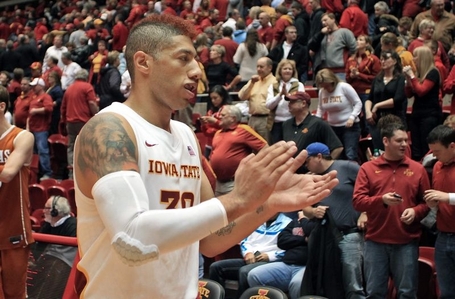 Royce says this is his last game rocking the Cy-Hawk haircut.

Over the last seven years, has not had much success against Texas A&M. To be more precise, has in fact had no success against Texas A&M. According to the good folks in the athletics department, the Cyclones have dropped eight in a row in the series, including five in a row in , and the last win was waaaaay back on February 24, 2004. That really blows (but not any more than an Aggie Yell Leader, amiright?)

Unfortunately for the Cyclones, breaking that streak won’t be easy. On the surface, the Aggies have lost three of their last four, with their only win coming over something called the Arkansas Tech Wonder Boys (not joking). Lest we all forget however, that this Aggie team was picked to finish in the top half of the Big 12 and features a couple guys that took a hard look at leaving school for last June’s NBA draft. A&M prefers to grind out every possession, play solid team defense, and limit the opponent’s transition opportunities, so it will be a test for a Cyclone team that is still working out the kinks.

The Cyclones snapped a seven-game losing streak to on Wednesday night in a 77-71 victory, which also was ISU’s first win in a conference opener since 2007. While we’re on the subject of snapping dry spells, how about junior guard Chris Babb? The Penn State transfer was mired in a 9-44 shooting slump from 3-point range before knocking down 5-9 from deep in Wednesday’s win. The Cyclones as a team went 10-21 from long range and will need to stay hot against the Aggies. A&M defends the three better than any team in the conference as opponents are only knocking down 26.5% of their shots from outside.

As I alluded to, Texas A&M will try and slow down the pace of the game and make use all 35 seconds of the shot clock. Aside from defending the three as well as A&M does, they also hold opponents to 56.2 points per game on only 35.9% shooting, both marks also are tops in the conference. The Cyclones will need to take care of the ball, and stay disciplined in their offensive approach to find the good looks in today’s game. Fred Hoiberg did a beautiful job against of mixing up who initiated the offense and sophomore forward Royce White will need to continue to be the main facilitator down the stretch.

On defense, the Aggies will try and screen ’s post players to death, and will look for open flashes to the basket by the screeners, so communication and cutting off passing lanes will be key. The defensive effort against was much better than it had been, but the Longhorns were still able to get into the paint too much. ISU has to isolate driving lanes and not leave A&M’s post players open as they role to the basket, or foul trouble could become a big issue.

Like I mentioned, the Aggies have dropped three of their last four and have been a disaster offensively over that stretch. While the Cyclones will have to point up A&M’s shooters, closing out in control and rebounding will be more important as A&M is the worst three-point shooting team in the conference, converting only 31.4% of their tries from distance. Texas A&M does turn it over 14.4 times per contest, and the Cyclones should have some good opportunities to create transition buckets.

The Aggies’ strength is their depth in athletic post players. Senior David Loubeau and junior Ray Turner form one the better post tandems in the conference and versatile wings Kris Middleton and Elston Turner create lots of match up problems, as they are threats to score both inside and outside. Middleton was a pre-season all league pick, and missed a good portion of the non conference season, but has since returned and is pacing the Aggies’ scoring at 13.7 points per game. A&M will mostly play 4-on-5 on offense as senior point guard Dash Harris does not look to score, but he does a very good job setting up the offense and is one of the best on-ball defenders in the league.

Tough to tell what you’re going to get from either team. Texas A&M has looked shaky lately, but they did play #5 Baylor tough in their conference opener. on the other hand has won six in a row, but the competition hasn’t been very good and Hoiberg hasn’t been able to squeeze a solid 40 minutes out of his squad yet. Ultimately, the team that shows more discipline is going to win this game, which would normally be Texas A&M, but discipline without execution rarely adds up victories. will put the Aggies’ defensive perimeter prowess to the test as the Cyclones boast the best outside shooting arsenal in the league. It’ll probably be ugly, but I see pulling this one out and leaving with a victory in hand.