TODAY WAS A GOOD DAY - Royce White fucked around and got a Triple-Double, and the Cyclones cruised to a 74-50 win over the traitorous Aggies, a team they had not beaten since famed satellite dish salesman Wayne Morgan was the coach. The Cyclones have now won 7 straight (12-3, 2-0) heading into their game against #6 Mizzou on Wednesday. (8:00, ESPN3)

ALL EYEZ ON ME - Royce's Trip-Dub (10 Pts/18 RB/10 Ast) was the first in Big 12 conference play since Curtis Stinson demolished Colorado back in 2006, and means that Iowa State is now responsible for 50% of all Triple-Doubles in the history of Big 12 conference play. For his efforts, he was named the "College Sports Madness" Big XII player of the week, and was the "Player Who Deserves Improper Benefits" by CBS' "Eye on College Basketball" blog.

HOW YA LIKE ME NOW? - ESPN's inaugural "At the Watercooler" recap gives the Cyclones a lot of love, and forces Brennon Eamon to admit that he gave up on the Cyclones too early this year.

EXPRESS YOURSELF - Will Clyburn talks about his former team's struggles this season while he sits and waits to suit up for the Cyclones next year.

OOPS (Oh My) - The women lost to #1 Baylor, but held the Bears to a season low 57 points. Britney Griner was the difference maker for the Bears.

INSANE IN THE MEMBRANE - CATLAB has been kind enough to help us understand what it might be like to take acid while in Manhattan, KS. (No I can't explain it just go watch and clean your brains up off the floor later.)

TEARZ - If you missed WVU's Darwin Cook plowing over Obie the Orange Bowl mascot, here's his reaction to him finding out it was a woman.

100 (LES) MILES AND RUNNIN' - And of course, a reminder that the National Championship is tonight. First team to 10 wins! 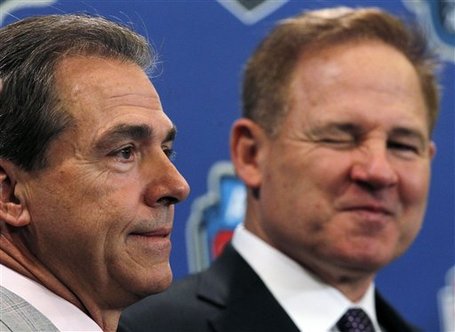