Share All sharing options for: Cyclones in Vegas: Retro Diary 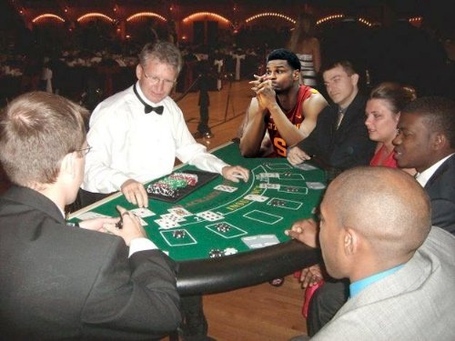 Although the Cyclones lost both of their contests in Sin City, the trip still proved to be a once-in-a-lifetime experience for Fred Hoiberg's squad off the court. Prior to the trip, WRNL asked Cyclone walk-on Tyler Ellerman to keep a diary of all the events and he came through in a big way. Here is the unedited, unfiltered and in absolutely no way fabricated for the purpose of getting a few cheap laughs highlights of the trip...

3:00 PM Vegas Time (VT) - We arrive in Vegas. Georges is wearing a fedora. It does not look cool.

4:30 PM VT - We get to the Venetian, our hotel. Coach Hoiberg instructs us to be responsible and that we are not allowed to call the girls on the cards that the dudes on the street are handing out to us. He's looking at Babb.

4:56 PM VT - Babb is getting details about the Crazy Horse from the concierge.

7:15 PM VT - After team dinner at the buffet, the coaches head off to plan for tomorrow's game. Me, Clyburn, Booker and Gibson decide to play some black jack. None of us have ever played before except Percy. He is dealt a 5 and a 7 and asks to "split". I don't think he knows the rules.

9:45 PM VT - I get a text from Naz to come meet him, Korie and Ejim at Mirage. Booker is up $2,000 and Will and Percy are headed back to their rooms. I ask if Booker wants to leave with me. He shoots me a sharp glare and doesn't say a word. He's staying.

10:50 PM VT - I meet up with the guys at Mirage. Korie asks a pit boss where they "shoot dice". Pit boss has no idea what he's talking about but directs him to a craps table. Korie says he prefers to play on the pavement but gives it a shot anyway. He drops the dice off the table. First of many turnovers for Korie for the weekend.

1:20 AM VT - Naz knows the door guy from when he played prep ball at Findlay Prep, so we're on the list. Babb is inside and waves us over. He's got a booth and bottle service and is surrounded by six of the hottest chicks I've ever seen. They think he's a rapper or something. We play along. I text Booker and he replies back, "on a heater".

3:34 AM VT - G-R-E-Y G-O-O-S-E. Korie steals a bottle of Grey Goose from the booth next to us. After a few pulls, the bouncer notices and asks Korie to "turn it over". I laugh to myself.

5:21 AM VT - We get back to the Venetian and Booker is still playing black jack. At our urging he reluctantly leaves the table up $50,000. Pit boss comps a suite for us. Ballin'.

5:45 AM VT - I decide to pass out but Babb has girls from Seattle or Vancouver or somewhere coming up to the suite.

12:30 PM VT - Team lunch and shoot around for Cincinnati game. Pretty sure Babb and Korie haven't been to bed and I think Clyburn has a new tatoo.

6:45 PM VT - Back at the hotel, we all head to the pool. Georges is wearing a white t-shirt in the water and I'm the only one on the team that ventures out to the deep end. Apparently nobody else knows how to swim.

9:00 PM VT - Dinner at Delmonico Steakhouse. Our waitress is practically throwing herself at coach Hoiberg. Just another day in the life of The Mayor.

10:36 PM VT - Coach Abdelmassih decides to tag along with us for the evening. Walking down the strip, somebody calls him "Oddjob".

11:14 PM VT - Booker drops a quarter in a slot machine at Paris and wins $1,000. His celebration face looks no different than his pissed off face.

Midnight VT - Topless burlesque show at Flamingo. At one point, Babb runs up to the front and throws a bunch of dollars on stage. Security has to tell him it's not one of those places. They do not give him his money back.

2:25 AM VT - We see rapper Drake at MGM Grand. Tyrus chats him up and he invites us to his suite for a hotel party. Tyrus McGee: always hustling and always clutch.

4:03 AM VT - The Cristal comes out. Korie decides to pour everyone a glass, but wants to show off his bartending tricks. To nobody's surprise, he drops the bottle.

2:40 PM VT - Back to the pool. I ask Ejim to help me get the sunscreen on my back. He's giggling the whole time and won't tell me why.

7:15 PM VT - Post game shower and I find out why Ejim was giggling. He drew a sunscreen dick on my back. Well played Mel.

8:05 PM VT - Arrive at the airport. Booker is carrying a plastic bag full of cash. He doesn't seem concerned. Georges realizes he left his fedora back at the hotel. Only real win of the trip.