A quick primer on where the Cyclones are likely to end up playing in a few weeks.

Q: So where are we headed?

A: As of right now, it's hard to say. The Big 12 has eight bowl tie-ins, a possible at-large BCS berth for an 9th team, and 9 bowl eligible teams. This leaves the very unfortunate possibility that Iowa State may end up in a non-Big 12 affiliated bowl. (It's not likely, because we travel better than Baylor. But there is a non-zero chance.) As of last weekend 71 teams are bowl eligible, and there are 35 bowls.

Q: We ARE going to a bowl though, right?

Q: So where could we end up?

A: Texas or New York again, most likely. Depends on the MAC championship game.

A: Nope. Not since the Big East rule took effect, which states that if a non-AQ conference champion finishes higher than 16th, and ahead of an AQ-conference champion in the final BCS rankings, they are awarded an at-large BCS bowl berth. Kent State and Northern Illinois are #17 and #21 respectively, with no Big East teams in the Top 25.

It's a given at this point that Notre Dame and the SEC champion will play in the BCS Championship. Sugar Bowl gets the first replacement pick and will take a second SEC team. (Florida or Georgia, most likely.) After that, the Fiesta chooses an at-large team to face off against Kansas State, and they're going to pick Oregon, because the ducks are the only non-SEC, non-Rose Bowl team left to choose from in the BCS Top 10 right now.

Assuming the favorites win this weekend (meaning K-State, Stanford, Alabama, FSU, and Nebraska all win), the BCS bowl picture will look like this:

One of those "At-Large" spots is going to the Big East champion. Oklahoma is in prime position to grab the other, but if the MAC champion manages to climb to #16 or higher in the BCS rankings, Oklahoma gets bumped to the Cotton, and suddenly the Big 12 has one more bowl eligible team than guaranteed bowl game slots, and more locations come into play.

Q: So if not Texas or New York, then where?

A: An ACC or SEC bowl would be the likely alternative. With only 6 eligible teams in the ACC (assuming Georgia Tech qualifies at 6-7), the Independence Bowl (Shreveport) or Military Bowl (D.C.) would have a bid open.

Should UConn or Pitt lose on Saturday, the Big East's bid in the Beef O'Brady's bowl would also be open.

The SEC, after sending two teams to BCS games, will still have bids open to the BBVA Compass bowl and the Independence Bowl, but the Compass bowl contractually takes a Sun Belt team when there aren't enough SEC teams. Fucking Shereveport.

Q: I heard a band member got stabbed last time we were in Shreveport?

A: That sounds about right.

Q: So who do I root for this weekend?

A: Depends on your preference of bowl game, really. (And to a lesser extent, what opponent you want.) Here's a quick and dirty graph of who to root for, based on what bowl you want to see the Cyclones in. For what it's worth, I'm projecting us to go to Dallas, but I wouldn't be surprised by New York City again. (Disappointed, but not surprised.) 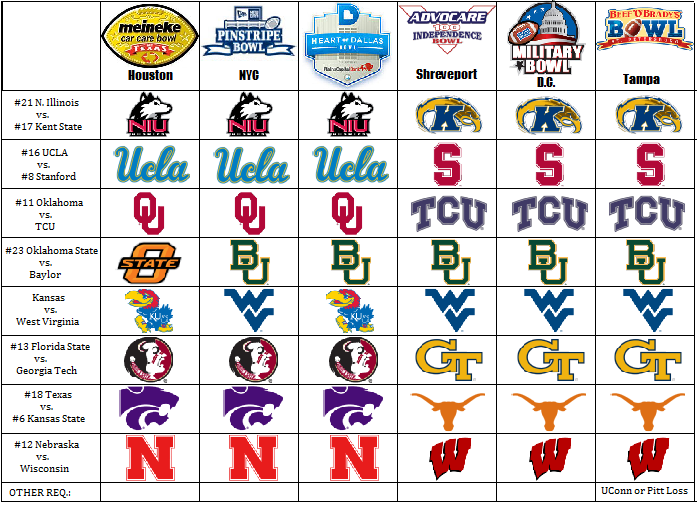