Inconsistency on offense while giving up chunks of yardage through the air is never a recipe for success.

Iowa State put up a good fight, but were done in by Landry Jones' 405 yards and 4 TDs through the air, with Brennan Clay adding 24 carries for a career high 157 yards as the Sooners continued to torment the Cyclones.

The defense played much better than the numbers showed, picking off Landry Jones twice in the first half, but giving up the touchdown to Oklahoma after thinking they'd go into halftime down 1 was a back-breaker. After that point, the defense was only functional, instead of the top 20 unit they've looked like the rest of the year.

Meanwhile, the offense returned to its maddeningly inconsistent self, with a good looking scoring drive followed by a 3 and out. Drops haunted the Cyclone offense with a couple of drops on would be first down conversions.

Despite the setback, there were some bright spots today. While he didn't put up gaudy stats, Steele Jantz looked fairly passable (other than his Jantzian pick in the fourth quarter), and seems like he is improving week to week. Quenton Bundrage once again showed off his potential, while Jeremiah George filled in for Jake Knott impressively with 17 tackles.

Another notable from the game was the confrontation between Bob Stoops and Paul Rhoads during the post game handshake, when Rhoads looked like he had to be restrained by security from going after Stoops. 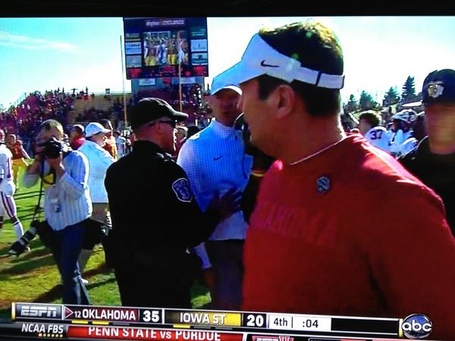 Both Rhoads and Stoops are denying that there's a problem between them, but I'm sure many will speculate on the parallels between this incident and the Jim Schwartz/Jim Harbaugh altercation from last year..

Much like the loss against Kansas State, there appears to be a lot of positives that the Cyclones can take from this game in acknowledging defeat to a superior team. Let's hope that the team can take these positives and turn them into wins number 6, 7, and 8 in the coming weeks.