Tempo is key in any sport and has been a point of emphasis for Paul Rhoads since coming to Iowa State. Now Kirk Haaland looks at how that tempo has worked so far in 2012.

Editor's Note: Kirk Haaland occasionally graces us with his detailed stat analysis. You can find him on his own web site at Encyclonepedia.com and on Twitter at @khaal53.

Since Paul Rhoads took over the head coaching spot in Ames one of the major talking points for the offense has always been tempo. The Cyclone offense not only wanted to establish their tempo but they wanted to incorporate it as a weapon to speed up and slow down as the game situation and success dictated.

It has also become the catalyst for some angst among fans when things don't go quite right. As has been discussed before quick tempo is a great thing when it is working but when it is not and the offense isn't moving the ball the opposing offense can have the ball back before anyone even knows what has happened.

The question came from CanAzn, who wanted to see a breakdown of how the Cyclone offense performs on plays immediately following big gainers. Determining which tempo was used in which situation would require watching a replay of every snap since 2009, and while the play data can be pulled from the game log there is still no way to determine tempo. For simplicity's sake (and laziness) we will lump the data in together and begin from there.

CanAzn's request was to illustrate the success ISU has on the play after plays that gain 10-14 yards, 15-19 yards, and 20+ yards. For reasons still unknown, I accepted this mission even though I only included the six conference games from this season. Here is the breakdown:

Note that this only includes plays that went for 10+ yards and had another play to follow it. This isn't a log of every play the offense has made of 10+ yards.

As you can see it is broken down by run, pass, and total play in the last three columns on the right. For reference, on the season the Cyclones are averaging 4.62 yards per play in total, 5.98 yards per pass attempt, and just 3.88 yards per rush. In hindsight I'm not all that sure the breakdown of the yards gained in the initial play is too relevant but you can see that the "next play" hasn't been terribly effective.

If you look at just the bottom row where the run, pass, and total play data is totaled the running yards per attempt is at 4.80, almost a full yard improvement over the normal average. Pass yardage average is at just 4.19 which is roughly 1.75 yards under the average. The total yards per play at 4.53 on the "next play" is just under the average of 4.62 mentioned above.

Based solely on anecdotal observation it seems that the majority of the plays ran after a gain of 10+ yards, and the offense is in jet tempo, is either the zone read or a quick wide receiver screen.

One interesting sidebar that developed is the number of 10+ yard plays by the offense has increased at a steady rate throughout the conference season. When you look at just the number of plays that were greater than 10 yards by opponent and the average yards of those plays as well as the "next play" the info looks like this: 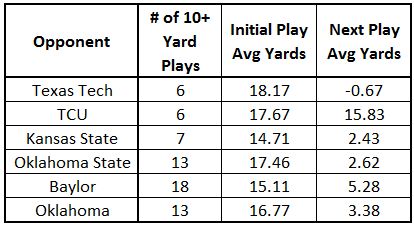 From just six plays of 10+ yards to 13 and 18 the offense has progressed nicely in that regard. The scary part is when you look at the average yardage of the next play by opponent. The negative numbers from Texas Tech were the result of a couple of sacks and the success against TCU is largely credited to two plays; one of 51 yards and one of 22 yards.

But aside from the numbers against TCU and Baylor (the worst defense in the galaxy) the plays following big gainers have been a bit of a struggle, at least in conference games. As mentioned, this can't be a clear indictment of the use of the jet tempo because this isn't limited to quick snap plays.

However, there is definitive reason to say the big plays aren't being followed up with more big plays or even a lot of success. A lot of the reason for the averages being so low is due to incomplete passes that obviously gained zero yards, 12 of the 27 pass plays charted as "next plays" were incomplete passes.

Below is the raw data of every play for you to digest on your own. It's hard telling if the jet tempo is a success for Iowa State or not, but one thing is for sure, this team is not getting large chunks of yards in back-to-back plays very often. Feel free to comment below and tell us what you think the problem to Iowa State's tempo is.