The CyHorn Power Hour Makes A One Week Return

The CyHorn Power Hour was canceled by network execs (What good show doesn't get canned at least once?), but is making a one week return to talk before Iowa State returns to the site of their 2010 triumph. Peter Bean from Burnt Orange Nation and I chat about this week's surprisingly decent matchup.

Share All sharing options for: The CyHorn Power Hour Makes A One Week Return

CanAzn: Right on cue. you messaged right as I was made aware I screwed up Fanthropology by leaving "Longhorns" in from your template.

CanAzn: It took all day for someone to notice... so i think we've all just become resigned to your terribleness.

PB: In the end, we're all Longhorns.

PB: Our brand value kind of blows these days though.

CanAzn: Allow me to not feel sorry for your 7-2, already bowl eligible team.

CanAzn: I actually do understand some of the angst, but as Cyentist pointed out today, the amount of bitching that's coming from Texas is more befitting a 4-5 team. You know, like Iowa.

CanAzn: We can come back to the I told you sos about Greg Davis, but I don't think anyone was in disagreement there.

PB: You must be enjoying the Greg Davis era in Iowa.

CanAzn: You can't even imagine. James Vandenberg has four TDs on the season. YES. THE SEASON.

PB: There were memos.

PB: Hardly. I feel like I let y'all down.

CanAzn: It's like he needs your burnt orange approval. Either that, or you were piping in Texas co-eds for him and then you stopped. Thanks for nothing.

PB: Actually, we went into a tailspin, as well.

CanAzn: I didn't connect the dots there, but yeah, you're right... what the hell happened?

PB: Shit, how did we miss that?

CanAzn: Do you think we can get a show on LHN?

PB: It would be better than watching the Texas defense.

CanAzn: The problem here, of course, is that being on LHN would actually be a downgrade, because SB Nation reaches more households.

CanAzn: Wescott touched on this, but I have noticed UT's D getting better. It's almost like they realized they can use their arms to tackle or something.

PB: Well, you cannot get much worse than they were against West Virginia, OU, Baylor, and -- AND -- the first half against Kansas. They literally had nowhere to go but up. Even Baylor's defense was embarrassed to share a field with ours. But yes, they're improving. They gave up over 6 yards per play against Tech last week, but managed to limit Tech to FGs. We'll take it.

CanAzn: You take what you can get. We've kind of been doing that all year on defense. Lots of yards given up, not a lot of points.

PB: Let's assume some basic competency on the part of the Texas D on Saturday. Call it solid, but not strong. Can Iowa State capitalize on that?

CanAzn: I think so. Steele responded to his benching fairly well. At this point, I'd call him "functional", which is about a thousand times better than he was against Texas Tech. Our receivers though. My God. They might use their hands to catch less than your D uses their arms to tackle. We have 3 seniors at WR and somehow the most impressive receiver we've had in the last couple of weeks is a RS freshman that didn't see the field at the beginning of the year.

CanAzn: Jantz is doing better but it's still a work in progress. He did move it really well against Baylor... but who doesn't?

PB: From the outside, y'all seem like you're a pretty encouraging flavor of 5-4. Feel that way from your side?

CanAzn: Overall, I'd say so, but we're tiding towards the negative after the Jake Knott injury, as well as the secondary being pretty banged up. Jansen Watson tweaked an MCL against OU and didn't return, and I feel he's been our most solid corner this year.

PB: Paul Rhoads will declare those "opportunities for others to step up." Do you think he believes it?

CanAzn: I do. The biggest change in the program isn't necessarily the top end talent we're getting, it's just the overall depth. We're less scared of injuries than years past. For example. Jeremiah George had 17 tackles against Oklahoma in his first game taking over for Jake Knott.

PB: God, that's depressing. Our linebackers have been a disaster and they've had a lot longer to take over last year's departed seniors.

CanAzn: To be fair, George has been getting snaps during run downs all year, but just became full time. But then again, you guys are also getting 4-5 stars... so that's pretty bad.

PB: It's been ugly. We're allowing 6.3 yards per play on the year. 105th in the country. Behind North Texas. BEHIND BAYLOR.

CanAzn: How much has the loss of Jackson Jeffcoat affected the defense?

PB: He's a very good player, but the improvements we needed weren't anything he could fix. And Cedric Reed has done that stepping up thing.

CanAzn: So there goes that excuse... The last time we talked, we were both all about Kenny V. From the limited Texas ball I've watched, he seems to have dropped off a little bit. Have teams found a weakness in his game to exploit?

PB: Vaccaro has played pretty well overall. He's made some mistakes, but he's largely been the player we expected to see. The problems have been with the other safety, Adrian Phillips, who... wait for it... yup, while I was typing this a he just missed another tackle.

CanAzn: Seems intriguing. But don't worry, our receivers won't catch it and make you pay. I think Aaron Horne has more drops than receptions this year.

CanAzn: I don't think so. I mentioned the injuries, and there's just a general meh feeling around the program right now. I am predicting UT by 13. So of course, they'll probably win. And then lose to KU.

PB: It's an 11 AM game on the Longhorn Network. Everyone's going to be flat except Paul Rhoads.

CanAzn: This is true. The last 11 AM game didn't go so well for you guys, and it led to the infamous PaulRhoadsSpitsHotFire pic. 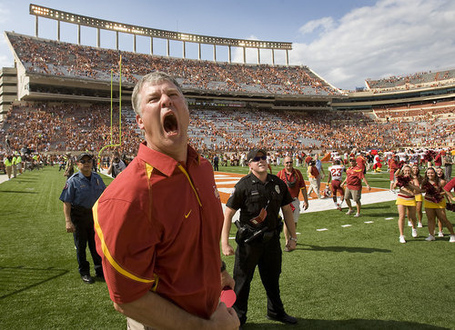 PB: I should have stayed in bed.

CanAzn: I was in a wedding that day. Didn't even get to see it.

PB: So what is your plan for Satuday? Internet feed of the game?

CanAzn: Actually, no. Your LHN overlords have kindly allowed the game to be shown on local ABC networks in Iowa.

CanAzn: Yes. And you're paying us a bunch of money. Keep that Texas money rolling. OK, so here's the big question. What's happening to Mack?

PB: I guess y'all have a say in that. He needs to win on Saturday, that's for sure.

CanAzn: Is DeLoss going to "disrespect" his contract this offseason regardless?

PB: Right now, it's his decision. If we collapse down the stretch, perhaps not.

CanAzn: You know what the followup is going to be... How do you feel about Muschamp's success?

PB: Bitter. How do you think?

CanAzn: How many of you guys are trying to build time machines and go back to 2011 to try to force Mack's resignation?

PB: You know, no one ever says they walked away too soon. I think Mack would have been happy leaving after 2009. The way that title game went down with Colt getting hurt led him to make a bad decision. It's unfortunate.

CanAzn: Oh, that game that gave you all hope that Garrett Gilbert was going to be the next in the line of elite Longhorn QBs? (I'm going to apologize in advance for that one. That was mean.)

PB: So before we wrap this, let me ask you: are you pulling for K-State?

CanAzn: Absolutely I am. I pretty much pull for any undefeated Big 12 team to make the championship.

PB: I am too. It's hard not to like Snyder and Klein.

CanAzn: Though I do realize the irony of that statement from a fan of the team that fucked it up for the Big 12 last year.

PB: You gave Nick Saban a title. You suck. Unforgivable.

CanAzn: Yeah, I know, I would have traded it for another win. But our reward was getting Schiano'd in a cold bowl game to make Yankee Stadium more money!

CanAzn: I'm not hating here, but did you read the article about Klein and his marriage?

PB: No. Sounds like you're kind of hating. What's it about?

CanAzn: He's basically more Tebow than Tebow. Which apparently is the explanation for his awesomeness.

Klein said he was told by the Lord he would marry K-State women's basketball player Shalin Spani. The daughter of former KSU football great Gary Spani said she heard "a voice in my head" independently that told her she would marry Klein.

They became engaged before they formally had a first date. That first kiss came on the altar July 21, fulfilling a promise Klein made to himself at age 14. His first kiss would not come until then.

PB: Well, he does play in a stadium named Family.

CanAzn: Where they supposedly graze sheep outside the stadium.

PB: Better than molesting them.

CanAzn: Having zero background on where this came from, I'm assuming (hoping?) it's an Aggie reference and nothing to do with your personal life.

PB: By the way, the Aggies are knocking on the door of the Top 10. The college football gods are punishing us for our arrogance.

CanAzn: And Manziel looks like white Michael Vick. I choose to look at this as a positive though. That the SEC isn't all ESPN cracks it up to be.

PB: It's really not this year.

CanAzn: Or any year. The Big 12 stacks up extremely favorably. I'm as big of an Aggie hater as anyone, but I never thought they'd struggle that much.

PB: I will be so crushed if Bama wins the title.

CanAzn: THANKS LES MILES! Prevent prevent prevent ALL OUT BLITZ. A formula for success! (technically: thanks John Chavis, but whatever)

PB: That was the most Les Miles loss ever.

CanAzn: All they had to do was sit in base defense the entire drive. but that's too simple, I guess. Chances Mike Slive paid Miles off to keep the SEC dream alive?

PB: Well, I'm officially in a sour mood. This has been fun!

CanAzn: Indeed. Last note: Coming out in wishbone as a tribute to DKR is really cool. R.I.P.

CanAzn: I do feel that you honoring people via plays should be more of a thing now.

CanAzn: We honored Dan McCarney in our game against Iowa by endeavoring to score the least amount of points possible and still win, you guys are running wishbone for DKR, and I came to the realization in a WRNL comment thread that the next one you guys can honor should be McConaghey. ALRIGHT ALRIGHT ALRIGHT = QB rollout right, guards pull right, all receivers run routes to the right of varying depths.

PB: Into the stands, if necessary.

CanAzn: Well, it's been real. And if you do fire Mack Brown, stay away from Paul Rhoads. Thanks in advance.

PB: No promises. Especially if y'all win.