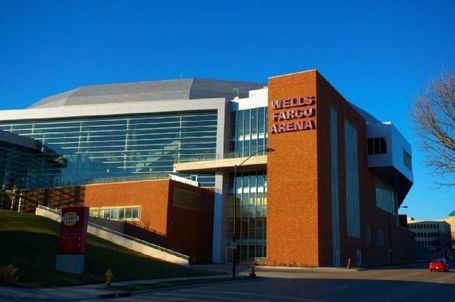 The inaugural Hy-Vee Big Four Classic kicks off this weekend at Wells Fargo Arena in Des Moines, pitting Northern Iowa against Iowa in the first game and Iowa State versus Drake in the late afternoon clip. Putting all four fanbases in one building and in the same bar/restaurant district is a fantastic idea, but heed this warning Cyclone fans, we're on our own. You see, it won't be just the Cyclone faithful against a diminutive Drake crowd. No, not at all. The UNI and Iowa fans that stick around for the second game will quickly jump on the Drake bandwagon and will be rooting for an upset.

Couple that with the fact that Iowa fans will be quick to remind you of last Friday's victory over Iowa State and it makes it all the more important that you arm yourselves with witty comebacks, the only facts that matter, and hell, some pepper spray might not hurt too.

Here are the biggest questions heading into Saturday's event.

So why are we playing in this thing again?

Sign of the times. If you look around the country, you'll be hard pressed to find high major schools like Iowa State and Iowa that will regularly schedule road games or even annual home games against mid-majors within their state. The fact that the state's two biggest programs had been doing this for so long was somewhat of an anomaly in the college basketball world. In light of this, Jamie Pollard and Gary Barta got together and UNI and Drake were faced with two options; if they wanted the series to continue with either school, all games would be played in Ames or Iowa City, or agree to neutral site contests. And here we are. I honestly love the idea of a same-day event, but I think the athletics directors could have done it better. I know most people will say there's nothing for Iowa State to gain by playing both Drake and UNI, but sometimes being unique is better.

Don't be fooled by Drake's 4-4 record. They're a solid team that will finish in the top half of the Missouri Valley Conference and they can really shoot. Their four losses are to Detroit, Cal, Xavier and St. Mary's. All four of those schools played in the NCAA tournament last year. Kenpom.com has the Cyclones winning by ten, which I can see, but it's going to be a battle. Drake is led by senior sharpshooter, Ben Simons, who's pouring in 15.5 PPG and is shooting 40% from outside. If you're a fan of the deep ball, this is your game. According to Cyclones.com, Iowa State ranks 4th nationally in 3-pointers made per game at 9.6 while Drake ranks 6th at 9.4. If Iowa State is going to win this game, they're going to have to identify Drake's shooters in transition, play complete defensive possessions and make the right rotations to limit Drake's open looks.

You didn't answer the question. Is Iowa State going to win?

Yes. I like Iowa State to come out with much more intensity and urgency than they showed against Iowa and come away with a 83-71 victory. It will be interesting to see what The Mayor does with the starting lineup. Will we see Georges Niang and Percy Gibson in the opening minutes, or was Sunday's game against Nebraska-Omaha just a motivational ploy to get Melvin Ejim and Anthony Booker fired up? Also, coming off one of his quieter, but better games in a Cyclone uniform, does Korie Lucious finally turn the corner? I say he does, but we still need to see a few minutes of Naz Long here and there. Finally, what Will Clyburn shows up? He was a no-show against Cincinnati and Iowa, but had his two biggest games against UNLV and BYU, so it's not like he's only beating up on weak opposition. Iowa State doesn't need Clyburn to score 25 points every night to win, but they do need him to score with some consistency.

Alright good. So what do we do about the Hawkeye fans we encounter?

If you are engaged by a Hawkeye fan, do not fire until fired upon, unless you've got a real zinger, then let loose. Unfortunately, you know it and I know, but some chode-loving asshole will fire an unsolicited "Go Hawks" your way at some point tomorrow. Last Friday marked the first time Iowa had beaten Iowa State in something meaningful since 2010 and they're going to be happy to tell you about it. As someone who will be at both games tomorrow, I'll probably choose to let them have their moment...for a little while. Once I get a few beers in me, my tact and patience usually goes out the window. Luckily, as an Iowa State fan, you've got a lot more ammo in your gun right now. Politely remind these jizzwads about the ineptitude of their football program. They lost yet another running back this week and Greg Davis is still their offensive coordinator. And yes, the Liberty Bowl isn't the greatest bowl in the world, but it sure beats 4-8. On the hardwood side, take solace in the fact that despite losing to Iowa, Iowa State will end up with a better record and will ultimately have a better shot at making the NCAA tournament field. So what if it's because the Big 12 isn't going to be as tough as the Big 10 this year. When you're wondering what seed the Cyclones will be on Selection Sunday while Iowa is locking up it's first-round NIT opponent, you're not really going to care.

Sounds good. On the remote chance we encounter a UNI fan, what then?

I've been told these people exists. We all know UNI fans are just purple Hawkeyes, but in the chance that you actually come face to face with a true Northern Iowa Panther fan, tell them good luck I guess. Who really cares? We don't play them this year.

So after the game, what is there to do?

Chances are for most of you reading this, you're in the central Iowa area and are at least somewhat familiar with the Des Moines nightlife scene. In the event that you're not, here are a few suggestions.

Buzzard Billy's will likely be hopping all day. Being less than a block south of the arena, this will be the hub of action before, during and after the games conclude. If you can get a table, the food is great and there are a lot of great beers on tap.

The Court Ave District is the big Des Moines draw. I know it looks tempting, but I would avoid Mickey's and Johnny's Hall of Fame unless you're chasing some tail or something. Still, proceed with caution and wrap it up. Hessen Haus is a must for the boots of beer and if you're a true afficianado of brew, El Bait Shop is probably your place. With over 100 beers on tap and a solid menu that includes some excellent fish tacos, this is easily one of my favorite downtown bars. It's also connected to the beacon of sophistication and class and a throwback to simpler times, the High Life Lounge. I recommend the root downs. Court Avenue Brewing Company has an above average beer selection and if you can find it, Shorty's is also a favorite stop.