Iowa State athletics director, Jamie Pollard, treats his job like a game of chess; he's always thinking two moves ahead. With that in mind, it should come as no surprise that he maintains a short list of possible head coaching candidates should Paul Rhoads be courted by another school.

For the time being, Rhoads appears to be staying in Ames, but sources have informed WRNL that if Rhoads should choose to leave the Cyclone football program, Pollard will act quickly in naming his replacement.

The object of Pollard's affection appears to be Paul Rhodes, a fiery, passionate type that has been mentioned as a candidate for the openings at Wisconsin, Arkansas, Kentucky and Auburn.

Our sources indicate that Pollard spends anywhere from six to seven hours of his day perusing message boards and reading sports blogs and is impressed with what he's read regarding Rhodes. 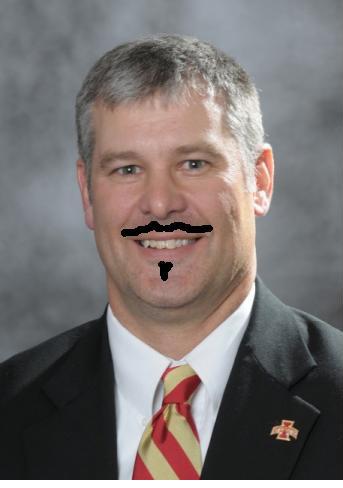 Pollard declined comment but an official within the athletics department who wished to remain anonymous confirmed to WRNL that Rhodes' name has come up and would likely be the top choice should Rhoads ever leave.

Unfortunately, the information about Rhodes is sketchy at best. Google searches of his name yield results of an English bakery owner to a Harvard-educated neuro-scientist. Ironically enough, most of the searches redirect to information regarding Paul Rhoads, which must be some type of coincidence since their names are so close to the same.

We reached out to Wisconsin blogger, Donnie Biercheesoup of the blog Badgering the Witness and he offered an equally perplexing take on Rhodes prior to the Badger's hire of Utah State coach Gary Andersen.

"I've seen both Rhoads and Rhodes mentioned for the Wisconsin job," said Biercheesoup. "The way people talk about them, it's almost like they're the same guy or something, which means either would be a good hire."

Again, our sources have indicated that at this point, this is all speculation, but WRNL will continue to pursue more information about Rhodes should Rhoads opt to leave.