Net Positives at the Point: Christopherson vs. Allen

Share All sharing options for: Net Positives at the Point: Christopherson vs. Allen

I would never assert that any coach should go unquestioned even if he is the "the Mayor" of Ames; especially when he still has less than two years of coaching on his resume. However, at the beginning of the year many found it curious that he would dub Scott Christopherson as the starting point guard for the first handful of games. There was some good and some bad but it was largely a struggle as the team mis-stepped its way to an identity.

Alas, roles switched and Chris Allen took over responsibilities as the primary ball handler and some improvements seemed to be made. There was the occasional quick shot from Allen that left fans shaking their heads but he is a better ball handler and he was able to get the Cyclones in their offense a little more efficiently. 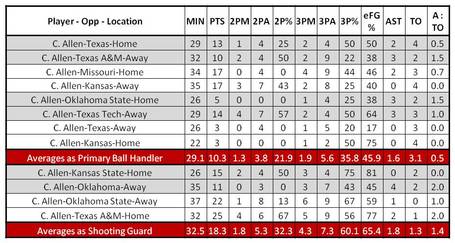 Early in conference play Christopherson excelled and the early season point guard experiment seemed to help his confidence with the ball in his hands. He was dishing out more assists than he ever had in his career and getting to the free throw line four times per game, more than double that of his previous career highs.

Through the first seven games of conference play this plan continued. The Cyclones were sitting 4-3 with the Jayhawks coming to town when Allen played perhaps his most lackluster game of the conference season. He tallied just three points and zero assists while racking up four turnovers that resulted in the well documented ass chewing from Hoiberg. 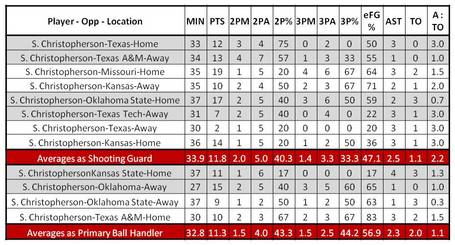 For much of the rest of that game the point guard duties were shouldered by Christopherson (keeping in mind that no matter who is running the show they have a lot of help, as needed, by Royce White to alleviate ball pressure on the perimeter).

Starting with the Kansas State game Christopherson again assumed the role of point guard and while his numbers dipped a bit in volume in some areas his shooting percentages for the past four games have improved over the first eight games of the conference season. Meanwhile, Allen has gone on an absolute tear averaging over 18 points per game, shooting 60% from the three point line and having a much improved assist to turnover ratio.

It's a similar story for Scotty. His scoring has dropped off ever so slightly by scoring just 0.5 points per game fewer and his volume of shots has gone down but he is making 3% more of his shots from inside the arc and 11% more from beyond the arc. His assists have dropped by 0.2 per game and predictably his turnovers are up 0.9 per game but let's look at the net gain of the role reversal.

Here are the averages combined for Scotty and Allen through the 12 conference games played. In each category the more red shade the cell the better (except for minutes played, that is just more red the higher the number) and the more blue shade the worse. 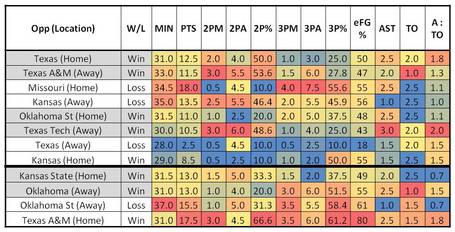 Nearly all of the best performances have occurred with the current change and many of the worst were right before the position switch was made. At the very least there is very little blue in the most recent four games.

Neither Allen nor Christopherson are pure point guards but they have both shown the ability to be serviceable or better for this Cyclone squad. Neither of them will ever be nominated for the Cousy Award for their production. The best that you can do is to maximize the combined production of the two.

Not only by who produces better when running the show but which one benefits more by not having to run the show. That is clearly what Hoiberg was looking at early in the season and what we all assumed to be the case. However, the team we have on our hands now is not the same team as before Christmas break. Roles are better defined and understood.

Many questioned that decision by Hoiberg and even more so when Christopherson and the team struggled so much. But, looking at the data it is clear that the net positives that Hoiberg saw prior to the season are now appearing to the rest of us as well.

If you enjoyed this article, be sure to check out www.Encylonepedia.com.