Iowa State is on an upswing right now, and it is AWESOME. Our football team managed to scrape out 6 wins against the 2nd hardest schedule in the country, and pulled the upset of the year against Oklahoma State. The prodigal son has returned from his time in the wilderness of Minnesota and has his team looking at the first legitimate NCAA berth since the Godfather of WRNL roamed the sidelines as the drunken master of the Big XII. Times are good, Cyclone Nation.

And while the younger fans buy in for their first "ALL IN" moment and the older fans wait for the other shoe to drop in yet another of the soul-crushing disappointments that seem to punctuate our fandom, take a moment to realize that no small part of this is because we've got this whole series of tubes figured out. In a sense, we are WINNING THE INTERNET.

Let's start with the most obvious example. I'm SO PROUD to once again link to this video that has been viewed over 370,000 times since it went up after a young, charismatic coach gave a giant middle finger to 85,938 screaming savages clad in scarlet. It's probably no coincidence that when we came within a fake FG of doing it again the next year, Nebraska says "Fuck This" and headed to the Big 10 to go roll a different group of Iowans.

Despite his similarity in appearance to Gomer Pyle, it seems that in 2009 Jamie Pollard was smart enough to realize that Paul Rhoads' maxed out Charisma stat was the best weapon in ISU's football arsenal. This being the 21st century and all, videotape is cheap, and Youtube accounts are free. Why not send out a grad assistant with a handheld camcorder to capture Our Great General in the process of motivating his troops? Nebraska comes down with a case of fumblitis, and suddenly you're parlaying Youtube gold into SportsCenter segments and a prime spot on the major networks' end of season college football montages. Iowa State is legitimately one of the few feel good stories right now in a vast sea of college football corruption. Publicity is everything, but if they won't put you on TV, take advantage of the fact that high speed internet is ubiquitous among ISU alumni.

Which brings me to the Clusterfuck-with-Good-Intentions that is Clone Zone. As an Iowan deep in godforsaken SEC country, it let me see every football game this year, and a lot of the non-conference basketball games that I have no chance of getting to see on TV. Hell, for football the games were even in legitimate HD this year! Sure the pure data overload crashed the servers during the first quarter of the UNI game, but overall the first season of HD was a relative success.

Problem is, for everything it does right, it fails to take into account what the modern sports fan is used to. A simple score and time graphic at the bottom of the screen, for example. Using John Walters' radio play-by-play is a clever way to solve the announcer problem, but like other announcers, he only gives occasional score updates in his play-by-play. Today's sports fan wants to know what the status of any game is RIGHT NOW with only a glance at the screen.

I understand that the reason these things don't necessarily exist is because Clone Zone is basically run by one or two dudes who may or may not be Graduate Assistants. If I could tell Jamie Pollard one thing, it would be this: GIVE THESE GUYS THE SUPPORT THEY NEED. (I.E. $$$$ and another couple Graduate Assistants skilled enough to give a score/time readout. ) OTHERWISE, YOU'RE CHARGING 9 BUCKS A MONTH FOR WHAT IS AT BEST A $5 A MONTH STREAMING SERVICE. I maintain my subscription as of now to encourage this sort of thing (and because of the whole "writing for a Cyclone blog" thing) but the average Cyclone fan isn't going to pay $9 for one football game or a handful of games against basketball patsies.

Finally, let's briefly touch on the two words that make technophobes and most people over the age of 35 cringe: SOCIAL MEDIA.

Back in 2004, Iowa State University was one of the first 30 or so Universities to get this crazy cool new thing called "Facebook." We mostly used it for staying connected to on-campus friends and facilitating casual sex - sort of like Myspace with a much cleaner interface and just for college students. 8 years later, this is happening: 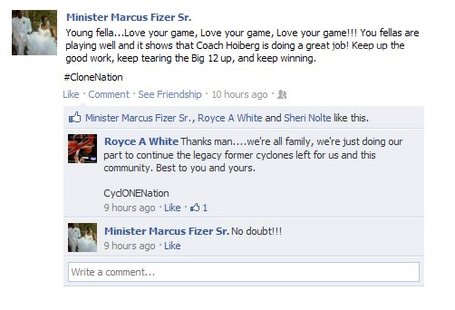 I'm not saying that Twitter is for everyone or that you should rush out and sign up for one right now. (Although if you do have one, feel free to follow us at @WideRtNattyLt) [/END SHAMELESS PLUG] But it's foolish, as the U of I tries to do, to try and silence a bunch of 18-22 year olds who have spent their entire lives hurling their every thought, location, and status update into the gaping maw of the Internet. It's a part of who they are at this point, and if you want to get talent to your school, you need to understand this. One needs to look no further to our neighbors to the East, where Kirk Ferentz continues to try and put a muzzle on kids like DJK and gets nothing but discord on the team as a result.

Compare that to Iowa State, where a steady stream of positive encouragement via Twitter can be delivered to Royce White (@Highway_30) any time his anxiety issues might give him some problems. In return, he responds with a steady stream of tweet love for #CyclONEnation. You don't have to "get it," but it's worth embracing. Winning the internet seems to be a pretty damn good strategy. Even if you don't care what Jared Barnett is doing with his Skittles as he watches the Mizzou game.