Share All sharing options for: Breaking Down the 2012 Iowa State Football Schedule

After what has seemed like months of speculation the Big XII finally released the 2012 football schedule yesterday morning. There were a number of surprises in there that contradicted the purported "leaks" from Texas Tech and West Virginia.

For starters, Tech was slated to visit Ames on October 27th according to the leak and the actual date is now September 29th. Also, Iowa State's two bye weeks come before Big XII conference play (September 22nd) and after Big XII Conference play (December 1st). This a huge drawback for a team with less depth than most of the conference but is not foreign territory for the program.

The bye week notwithstanding, the schedule sets up for a favorable start for the Cyclones and the potential for a breakout season. So jump on with me to the breakdown of the 2012 schedule and how the Cyclones will fare.

Uhhhh... cannot really comment much on this. I know Tulsa loses a significant portion of their offensive production and their defense is what you would expect of a C-USA school. Iowa State will not win this in a blowout fashion but it will be like the rest of the early season Paul Rhoads games that are solid and slightly underwhelming.

Both coordinators gone, Marvin McNutt gone, Marcus Coker gone, and the list goes on. Kinnick Stadium is not an easy place to win but for the first time since the mid-2000s the winds of change seem to be blowing in favor of the Cyclones. Crazy things happen in this rivalry (see: 2007) but it's hard not to go into this game thinking that Iowa State is the better and deeper team on paper. Proving it on the other hand will be difficult. 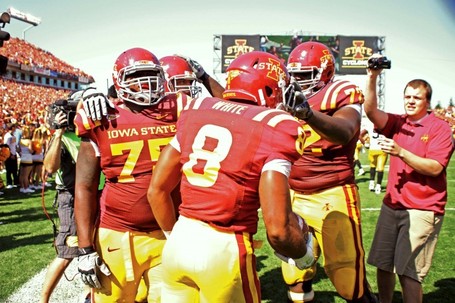 Western Illinois went 2-9 (1-7) in I-AA last year and will face an uphill battle. A key victory to getting closer to a bowl berth for the 2012 Cyclones.

Tommy Tuberville wanted to win badly in 2011 but got smoked by Rhoads and company in Lubbock. Despite a top 30 recruiting class ranking, and the hiring of new defensive assistants; The Red Raiders they are not going to beat the Cyclones, or a lot of Big XII teams for that matter, with Tubbs captaining the ship.

The question on everyone's mind going into 2012 is whether or not TCU can handle the rigors of a BCS conference week in and week out. Those who have not seen this team play are in for a big surprise. The Horned Frogs will not win the Big XII in 2012 but they are going to cause a stir. Their offense already fits in with the other teams in the conference and their defense is coached by one of the best defensive minds in the game in Gary Patterson.

Unfortunately Iowa State travels to TCU early enough in the conference season that the depth of each team will likely not be significantly tested.

11:22 AM UPDATE: In lieu of the recent drug bust it should be noted that TCU has now booted the following players from their team: SS Devin Johnson (starter), DT D.J. Yendrey (all-conference), LB Tanner Brock (potential All-American and team's leading tackler in 2010), and OT Ty Horn. That whole depth issue? Yeah, now it's going to be a factor.

Kansas State comes to Ames for the first time since Gene Chizik's first season and will have only faced Oklahoma and Kansas before the Cyclones get a crack at the surprise team of 2011. The Wildcats return a significant chunk of their starters including Collin Klein at quarterback and linebacker Arthur Brown.

This game will be what you can expect out of a matchup between Paul Rhoads and Bill Snyder: physical, closely contested and probably a bit sloppy at times. Kansas State had a magic run of going 8-1 in games decided by a touchdown in 2011 and will be hard pressed to replicate that performance in 2012 (see: 2009 vs 2010 iowa). 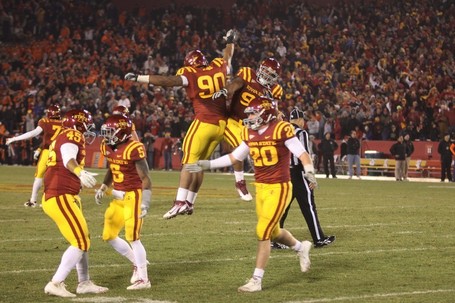 The game that fans on both sides have circled on their calendar now. Oklahoma State wants a measure of revenge and Iowa State wants validation for their upset of the 2011 college football season.

Our friends over at Cowboys Ride For Free have promised to show us a good time and our inevitable trip to the strip club and waking up in a pile of our own vomit will be all too synonymous with the Cyclones and how they handle revenge games. The only thing keeping this game from being ugly is the questionable ability of Todd Monken as offensive coordinator, having no Brandon Weeden and Justin Blackmon to fall back on, and a still questionable defense.

On second thought, strip clubs and piles of vomit are usually a sign of a good time, so maybe the Cyclones surprise people and beat a more talented team twice in as many years.

No RGIII, No Kendall Wright, and no Terrance Ganaway make Art Briles go something something.

Briles is a hell of a coach and he has unquestionably upgraded the talent at Baylor but without a dynamic, Heisman winning quarterback at the helm, and a defense that refuses to stop anyone not named Steele Jantz, the Bears are dangerously close to slipping into that one dimensional team that Rhoads and Wally Burnham have made a habit out of beating throughout their careers.

This game could very well play out a lot like the Texas Tech game did in 2010 with the Bears clearly having more talent but Iowa State executing better down the stretch to ultimately steal the victory.

Iowa State has not beaten Oklahoma since 1990 and has not beaten the Sooners at home since winning 10-6 in 1960. Prior to Landry Jones' announcement that he was returning and the hiring of Mike Stoops as defensive coordinator I would have placed this game in the "Improbable Win" bucket. Not now though.

Rhoads' teams have a tendency to start to peak around late October/early November and this is probably the best time to watch a football game, so maybe there is some magic to be had here.

History does not favor Iowa State in this road trip but the last time the Cyclones found themselves in Austin they came away with the first win over the Longhorns in school history. The 2011 Texas squad struggled to find consistency offensively and leaned heavily on their defense for a majority of the season. A healthy Malcolm Brown and incoming freshman running back Johnathan Gray will solidify the rushing attack but without consistent quarterback play from Case McCoy or David Ash the Longhorns will not break through and join the top three in the conference.

Likely a close game in Austin but the Texas defense is going to be a bear to handle in 2012 and will ultimately win games like this for the Longhorns.

If Iowa State hopes to get to their third bowl game in four years they have to win the games on the road that they should win, and this is one of them. Despite the hiring of Charlie Weis and the importation of Dayne Crist the Jayhawks are going to suffer from a talent gap for the next few years. Defensively the Jayhawks have a long way to go and Weis is not known as a coach who emphasizes defensive toughness. Couple that with the dismissal of a few offensive weapons and it appears that 2012 may be a long season for those in Lawrence. 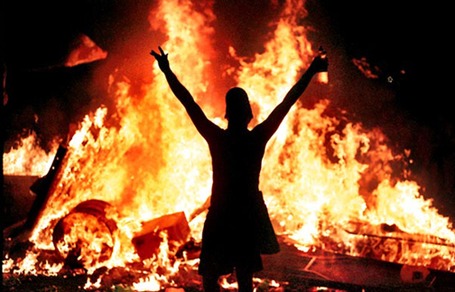 Riot Bowl I takes place in Ames two days after Thanksgiving. Cyclone fans will have to split their attention between the final home game of the season and the two day basketball tournament in Las Vegas. Mountaineer fans cannot be too happy about the game being on a strong family holiday weekend but I expect them to show up in droves with their mothers, fathers, cousins, aunts, uncles and anyone else who will join them on their trek to the Best Rioting School West of the Mississippi.

As for the game itself, the Cyclones will likely be underdogs but who knows how West Virginia will adapt to swapping Cincinnati and South Florida for Kansas State and Oklahoma. By this point in time the schedule will be a grind for both schools and the game may simply be a war of attrition. We however, welcome our new Mountaineer overlords to our humble-ish conference.

So where does all of this leave us? Well right off the bat you can see the Big XII is stacked. At this point I cannot pick a clear favorite and would actually break the conference into three tiers:

The new guys are going to make a splash. Probably not win the conference as their depth has yet to be tested at this level but they are going to win some games people would not expect.

In regards to how the schedule impacts the Cyclones, it's a bear no matter which way you slice it. The combined record of conference opponents was 68-37 in 2011. The schedule sets up favorably at the start and it is very possible for the Cyclones to enter October 4-0 and needing two wins for bowl eligibility, but with the exception of the game against Kansas, November is going to be a difficult finish.

The match ups are not ideal in certain cases (Texas and Oklahoma back to back again) but in a conference like this there are no easy weeks. For everyone unhappy about the structure of the schedule just remember how none of it matters once that ball is kicked on September 1st. And if that thought does not do it for you... then quit being a fucking pussy.