The Beginners' Guide to Big 12 Fans

Share All sharing options for: The Beginners' Guide to Big 12 Fans

Now that West Virginia is officially a member of the Big 12, we thought it would be nice to give them a rundown of what they can expect of their new conference's fan bases. Our new friends at TCU could probably give this a read as well, if they're not baked out of their minds - even then, there's a lot of colorful pictures. 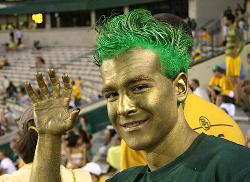 The last 6 months have been quite a ride for the Baylor Bears. On the gridiron they have had a Heisman winner in Robert Griffin III and an incredible record-setting shootout of a bowl game win. The MBB team is full of future NBA talent and has been a top-10 team all season. And just for good measure the WBB program is ranked No. 1 and has arguably the most dominant middle to ever play the game. You'd think life would be good - but then, you wouldn't be a Baylor fan.

Baylor fans are extremely elusive, even with unprecedented success in most sports. You'll notice the stands are largely empty behind this oddly supportive Baylor fan. You'll likely get to meet him; he stands out from most other Bear fans by actually attending athletic events. The football stadium is largely covered in a giant tarp and opposing fans colors. In case you haven't figured it out, red is not one of Baylor's colors.

Old Big East Comparison: None - Most closely resembles a church service, at a church nobody attends.

Recommended Web: You can go to Baylorfans and SBN's own Our Daily Bears - its better than nothing, barely.

Jump with us for a rundown of the rest of the Big 12 schools. 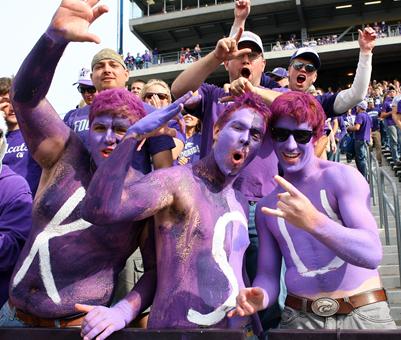 Kansas State fans are an interesting bunch. Hard-working, salt of the earth, generally good people, and unable to get into KU. It's not that KU is Ivy League selective, but KSU just has really low standards - they're in a perpetual state of beer-goggles in the admissions office.

A tailgate in Manhattan will likely resemble initiation day at a frat. Copious amounts of malt liquor consumed, naked and shamed men between the ages of 18 and 21, and very confused, emotionally vulnerable sheep.

Among the more "adult" crowd, you will find scores of NASCAR flags flying above the KSU flag and undoubtedly find more than a few Camaros which contain dudes who look like Vince Neil getting handies from chicks who look like Dee Snider.

All this while worshiping the Grand Wizard Bill Snyder - you'll learn to dislike Bill Snyder. His oldness somehow breeds winning football; it's all very confusing.

Recommended Web: Bring On The Cats is the place to go for all your Wildcat needs. 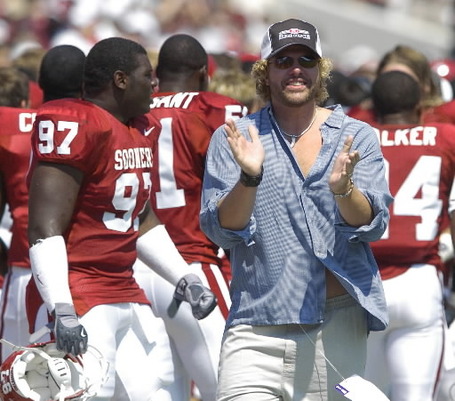 Sooner fans fucking love Toby Keith. He completes them, he is their world.

Besides loving sticking boots in the asses of radio listeners everywhere, Oklahomans also enjoy anything bad that happens to Texas.

Oklahoma fans can also be identified by their relentless chanting of "Boomer Sooner" regardless of the event or the situation.

Oklahoma fans are friendly to a fault, unless the football team has recently lost - then they can be extremely bitter. Mention Adrian Peterson to cheer them up.

Old Big East Comparison: Miami (They used to be in the Big East, right?). Lots of winning, lots of NCAA violations. 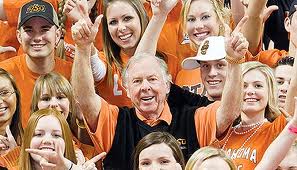 OSU used to suck at everything, then giant sloppy loads of oil money were shot deep into the athletic department & facilities and voila: instant success (with only a little lingering shame)

OSU fans are generally good people given their humble history and the fame hasn't gone to their heads just yet.

Recommended Web: Cowboys Ride For Free & OrangePower are both a good time. 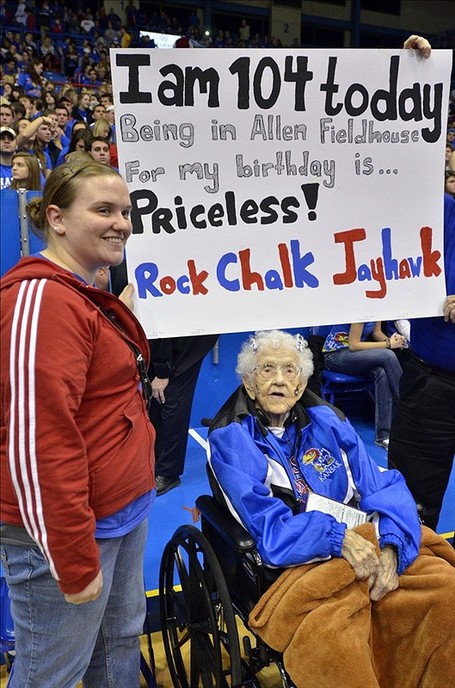 James Naismith, the man credited with inventing the game of basketball, founded the KU basketball program. So you expect them to be decent at the game, and they are. Kansas fans love their roundball, but they hate round people, which is apparently why they cut loose the only decent coach in KU football history (Mark Mangino) just because he packed on a couple extra pounds.

KU is OU's doppelganger - each dominating one revenue sport and failing horribly at the other.

KU fans save their cash for basketball season where they dominate and cling to the hope that football is just a passing fad. If you're wondering about what their "Rock Chalk" chant means, just keep wondering, its not worth the Google. 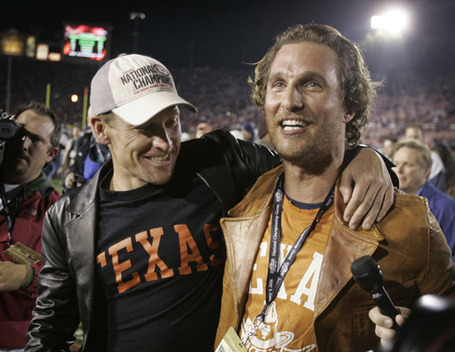 You've heard the rumors and they're all true. Texas mulches their campus with shredded hundreds and throws truckloads of money at mediocre coaching staffs just to get rid of some of it. Texas fans would probably be more disliked by other Big 12 schools had it not been for their mason jar-burning, vagina-oppressing, whiny brethren at Texas A&M. When comparing any school to the Aggies, you come out smelling like roses.

Texas fans, like most of the state, are brimming with "Texas pride". But being born Texan is really their only fault, and you can't blame an athletic department for taking money. UT fans are friendly and generally just looking for a good time, provided you don't bring up the whole "almost dragging the entire conference into oblivion" issue.

Recommended Web: ShaggyBevo will take you places you've never imagined the internet could go and Texas is the only school to boast TWO SB Nation sites in Burnt Orange Nation (for the legit stuff) and Barking Carnival (for the randomness). 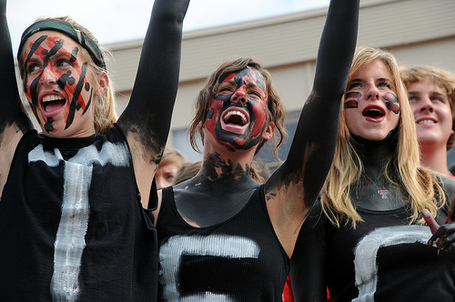 Texas Tech is falling apart. They used to have awesome coaches like Bob Knight & Mike 'The Pirate' Leach. They were the feel-good story for a few years similar to OSU but without the oil baron sugar daddy. Who knew that all it took to bring all of it to a screeching halt was Craig James? It's like he's now put two programs on a NCAA death penalty.

Tech fans are about as rowdy as Texans get. You could also refer to them as the Philly fans of the Big 12. Our friends at Cowboys Ride For Free once said that a trip to Lubbock was scarier than a trip to Norman. Whether it's throwing batteries at opposing players or ripping bleachers out of concrete to celebrate an upset; their total lack of tradition or sustained success makes for fans that just want to party, heckle, and reminisce about the good ole Pirate days. Things do not seem to be looking up in the near future on the field or court, so they might as well have a good time.

The Cyclones are humble people. Thankful for what little they have, mainly those Big 12 basketball titles in 2000 & 2001 and the occasional BCS shockwave worthy football upset. 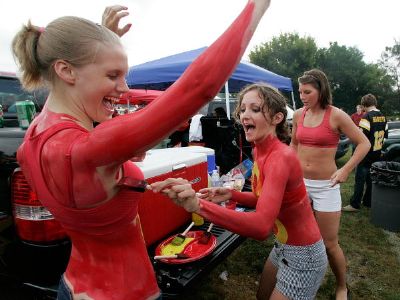 Years of athletic failures, threats of being scrapped during conference realignment, and a complete lack of respect from the outside world even when the athletic programs aren't all that bad has made Iowa State turn to the bottle to maintain emotional stability.

ISU fans are prone to field & court storming (winning is a big deal), rioting just for the hell of it, consuming copious amounts of cheap alcohol and pissing ourselves. ISU tailgating is top-notch due to decades of nothing worthwhile going on inside the stadium and we pride ourselves on the pregame.

Really, all we want is for someone to rub our head, tuck us in at night, and not molest us in our sleep.

Recommended Web: You're already here, but you can also follow @WideRtNattyLt on Twitter. Encyclonepedia is also a good time for those of you that love a good stat crunching.