Jerry Palm is Unimpressed With Your Achievements, World

Share All sharing options for: Jerry Palm is Unimpressed With Your Achievements, World 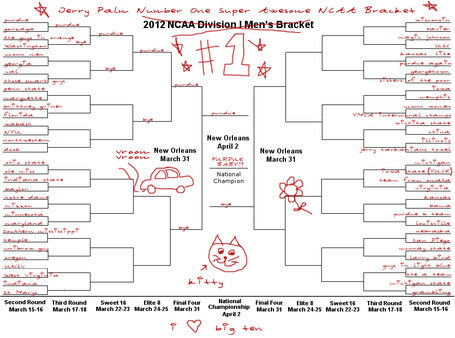 Bracketologists have a tough job. Sifting through hundreds of schools vying for bids to the 2012 NCAA tournament can be challenging, and dealing with the fanbases of teams that have been left out of projections has to be frustrating. This is the world of the professional prognosticator.

But CBS Sports bracketologist Jerry Palm is just fucking with Iowa State now. While Palm finally added the Cyclones to his bracket last Tuesday, he did so with disparaging remarks. And after ISU's win over KSU in Manhattan on Saturday, Palm updated his bracket with this note:

Iowa State picked up its first away-from-home win of any significance when it completed the season sweep of Kansas State. The Cyclones now have four top 100 RPI wins (despite a gaudy 11-5 conference record), and should be safe if they can get one more. Teams with just four top 100 wins have received 13 at-large bids in the last 18 years, but that's out of 250 teams.

In Eye On College Basketball's latest podcast, Palm also calls Cyclone fans "a bunch of newbies" that "just don't get it," (it being knowing what it takes for a team to get into the NCAA tournament). He also mentioned that he found it stupid that John Walters called him out at the end of the Kansas State game on Saturday.

So Jerry Palm is obviously aware of Iowa State, their accomplishments this year, and the passionate fanbase. But for most of the year, he still wasn't convinced that the Cyclones have done enough merit an invitation to the NCAA tournament, despite almost every other bracket projecting ISU in the field of 64 weeks ago. But that's fair. Palm is only the 26th-most-accurate bracketologist in the nation, yet he inexplicably works for the CBS Sports; the outlet that airs the NCAA tournament each year. How is this possible?

One answer: Jerry Palm is a goddamn psychic. He sees things that will occur, but also events that only may occur (Jerry Palm: Palm Reader. Coincidence?) Keeping track of all these possible threads of existence is taxing, and even though Jerry Palm is clearly operating on a higher level of consciousness than the rest of humanity, he can't possibly remember which teams have done enough to gain a tournament bid in this world vs. the world where Richard Nixon has been elected to his sixth consecutive term as president and a giant octopus has destroyed Manhattan.

Another, more likely answer is that Jerry Palm just may not be very good at his job. He's a guy who admittedly stumbled into bracketology after messing around with stats on newsgroups in the '90s. Palm is also a Big Ten Network analyst and Purdue alum who seems to have an affinity for Big Ten teams in the tournament, as seen by his insistence on keeping Northwestern in his bracket as an 11-seed, despite their 17-11 record and 7-9 conference record. Additionally, Palm only last week adjusted his bracket to include five Big XII teams while trimming the Big 10 teams down to seven from nine earlier in the season, even though the Big XII is 4-1 against the Big Ten this season.

So why even pay attention to Palm? Well, as mentioned above, he does happen to project brackets for CBS Sports, and CBS happens to have the broadcast rights to the NCAA tournament. As such, his projections carry a certain amount of weight. And when Palm gives so little respect to Iowa State and the Big XII while promoting Big Ten teams that probably don't deserve to be in the tournament, it affects people's judgement. While Big XII basketball doesn't have the top-to-bottom quality it's had in previous years, it's still been an elite basketball conference all season.

While bracketology is by it's nature an imperfect practice, Jerry Palm is doing himself no favors by trolling teams like Iowa State. Palm would be better served on improving his methodology, because with his record of picking teams, if bracketologists were ranked like NCAA tournament teams, Palm would be nowhere near the bubble.