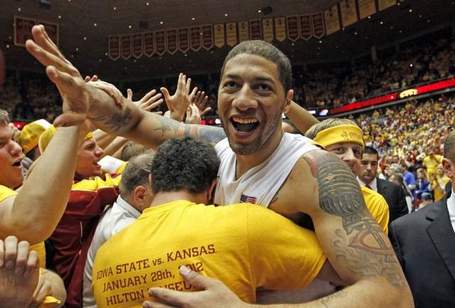 The announcement this afternoon that Royce White is going to the NBA after one season in a Cyclone uniform is bringing up some mixed emotions. People thinking about the basketball team the Cyclones could have put on the floor next season with Royce White are disappointed, maybe even a little pissed. For Cyclone fans, it's natural to think about missed opportunities. But others are grateful for his time here, and maybe even a little excited.

Not excited that Iowa State will be losing their best player next season. But excited for what Royce White's departure means for Iowa State basketball. In the seven years since the NBA added the 19-year-old age limit, the Cyclones have never had a player with talent in the same galaxy as Royce White. Maybe Brackins, but he didn't develop under Greg McDermott's coaching to the point where he could have left after one season for the NBA.

Granted, Royce White is a 20-year-old grown-ass man, three years removed from high school. But the fact remains that he only has one season of college basketball experience, and Cyclone fans need to appreciate that White spent that year at Iowa State. So while it's a little disappointing that Cyclone fans will never get to hear John Walters scream out "ROYCE WHITE!" in a mixture of excitement and disbelief again, let's appreciate Royce's time in Ames.

When Royce White announced he was transferring from Minnesota to Iowa State in the summer of 2010, he was the fourth and highest-profile transfer to join Iowa State in Fred Hoiberg's first season as coach of the Cyclones. Most Cyclone fans only knew him for his off-the-court dalliances with law enforcement and his YouTube videos. Royce's talent was undeniable, but many fans were apprehensive about bringing a player with White's sketchy past onto the team. Would a rookie coach like Hoiberg be able to control White's reckless behavior?

After getting to know White for the past two seasons, it seems ridiculous that this was even an issue. A charismatic, humble individual, Royce embraced Iowa State and never even toed the line of inappropriate conduct during his time in Ames. In one season of sitting on the bench and one season of playing time, White managed to turn himself into one of the most beloved players to wear a Cyclone uniform.

But there always clues that White was more mature than his reputation led people to believe. During his time away from basketball after leaving Minnesota, White taught himself to play piano. He became a father with his longtime girlfriend in February of 2011. Iowa State wasn't bringing in someone like C.J. Giles.

During the 2010-2011 transfer year, Royce became the unofficial leader of the transfer players. He spoke openly about the mistakes he had made in the past, and how it shouldn't tarnish the reputations of the other transfer players. He also spoke internally to Allen, Babb and Booker about how they needed to stay out of trouble, that people might be watching them more closely than other players on the team due to their reputations. Yeah, this reputation was unwarranted, but people really did look at the four transfers as misfits. People thought they must have fucked up badly at their previous schools, necessitating their transfers to transfer to Iowa State.

So after a season on the bench, during which the media to beat the term "best scout team in America" to death; Allen, Babb, Booker and White were finally eligible for the 2011-2012 season. Reports leaked from the summer Capital City League about how well the four transfers were playing. Royce fucked around and averaged a triple-double in league play, the first T-D in Capital City history. Excitement for Cyclone basketball was higher than it had been for a long time.

And then the season started. A solid, but underwhelming game against Lehigh opened the season. White scored 25 points and pulled down 11 rebounds, maybe setting Cyclone fans' expectations a bit too high for his performance the rest of the season. An inexcusable loss at Drake followed, but White again played well, scoring 21 points and grabbing 14 rebounds. But despite Royce's dominant performance, the team didn't seem to be gelling. They were playing uninspired basketball, and after losses at home to UNI and at Michigan, some fans resigned themselves to another mediocre season. And while no one questioned White's talent, some people were beginning to wonder about his desire and will to win.

Enter Dedric Willoughby. After a way-too-close call against Mississippi Valley State in the non-conference finale, Willoughby met with the basketball team in a closed-door session that one can only assume involved mild-mannered Dedric transforming into Wil-HULK-by and destroying most of the locker room in an effort to get the Cyclones to play better basketball.

Whatever he did worked, and the Cyclones went 12-6 in conference play and tied for 3rd place in the Big XII. By the end of the season, most of America had heard about the 6'7", 270 lb freak of nature that played point forward for the Cyclones and led them in almost every statistical category. When he was on, Royce was unguardable. When he was off... well, he was still better than most players in the conference.

So how would White, and by extension Iowa State do in the tournament? They drew a tough seed, facing the defending national champions in the first round and the overall number one seed in the second round. How would White match up with the lottery picks of Jeremy Lamb and Andre Drummond in the first game, let alone Kentucky's blue-chip front court in the second game?

Obviously, Royce played like a madman, and with the entire country watching, likely played himself into a first-round draft pick. Against UConn, White scored 15 points and grabbed 13 rebounds. He set the tone for the game immediately, blowing past two defenders on the first possession for a one-handed dunk; then making a reverse layup on the second possession of the game for Iowa State's first four points.

Against Kentucky, White may have played an even better game, scoring 23 points, netting nine rebounds, four assists and three steals. And if ANY three-point shots had been falling that day, who knows how the game would have ended. Instead, the Cyclones shot 3-22 from behind the arc and lost to Kentucky by 16 points.

So after an incredibly fun season that saw Iowa State fight their way back to relevance, Royce White is taking his game to the next level. It's hard to say what White's impact will be long term, but right now it's easy to see that both Iowa State and Royce benefitted from their relationship with each other. In White, Iowa State had one of the most exciting players in the country helping lead them to their best season in years. White helped bring magic back to Hilton Coliseum, helped Iowa State return to the NCAA tournament for the first time in seven years and helped bring fans back to a dormant program.

And in Iowa State, White found a safe place where he could let his basketball talent shine, but also stay away from bad influences and learn from a coach that had been in the NBA and knew how to guide players there. It was a mutually beneficial relationship, and gave both parties an unforgettable season. So let's wish Royce White well in the NBA, and remember everything that he brought to Iowa State.