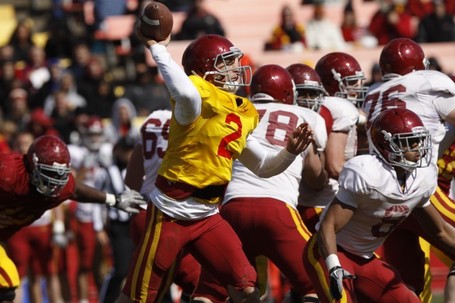 Iowa State's 15 spring practices culminate this weekend with the annual spring game on Saturday. This year is slightly unique in that the spring game isn't the same weekend as VEISHEA, which is a bit of a mixed blessing. On one hand, tailgating for the spring game provides a nice launchpad into the beer-soaked debauchery and rioting family-friendly celebration of Iowa State pride that VEISHEA provides. On the other hand, who cares about VEISHEA anymore? The spring game is much more interesting/relevant (although this year DOES feature Young MC at Cyclone Idol. Bust a move, indeed).

But watching the spring game can be a confusing experience. Is the offense playing exceptionally well, or does the defense just suck this season? All these freshmen look like deer caught in headlights; they'll look game-ready by fall, right? And why can't I bring this keg to my seat with me like students used to do in the '70s? So let's take a look at what to watch for when you're watching Iowa State's scrimmage this Saturday.

Quarterback Play: Paul Rhoads is capable of many things: Resurrecting moribund football programs, inspiring loyalty in young players, catching live salmon between his powerful jaws. However, he's seemingly incapable of naming a quarterback before spring practice concludes. The quarterback controversy that lingered all last season continues this spring, with Jared Barnett and Steele Jantz fighting for the top spot. Watch how Barnett and Jantz perform, specifically their decision-making and accuracy, something both quarterbacks struggled with last year. Do not exect a lot of Sam Richardson. He's still learning the offense and has a ways to go to match the game experience of Barnett and Jantz. He'll show some bright spots, but let's not kid ourselves. He isn't ready for the spotlight (yet).

OC Messingham's Gameplan: The offense never does anything spectacular or anything to tip its hand in the spring game. And although Courtney Messingham is now calling the plays, Iowa State will still be running the same offense that they have for the past three years. But Messingham has spoken openly about simplifying the Cyclone's offense and focusing on what the team does well. By all reports, it's paid off and the offense has been efficient during spring practices. Look for the percentage of running plays to pass plays, on which down those plays are called, and how well the offense moves down the field. Maybe even watch to see if Iowa State goes under center in short-yardage situations.

Todd Sturdy's Impact On WRs: Iowa State hasn't had a true impact wide receiver since Todd Blythe began crashing into waitresses in the AFL after the 2007 season. Darius Reynolds filled that role during the first half of last season, but was streaky down the stretch.

Hopefully Todd Sturdy, Iowa State's new wide receiver coach can change this. Sturdy has offensive coordinator experience at Eastern Washington and Washington State and over 20 years of experience coaching football, so he should know what he's doing. And Paul Rhoads has recruited at least three wide receivers per year since he arrived in Ames, so there is theoretically talent at the position. Watch how well the receivers are able to separate from coverage, something Cyclone WRs have had problems with recently. Also look for dropped balls, whether those drops are the result of QB or WR error, and how well receivers are blocking downfield on the inevitable bubble-screens.

Specifically keep an eye on the newcomers Quenton Bundrage (9), J'Aquarius Daniels (5) and Tad Ecby (6). All are expected to compete for starting positions this season and Rhoads even said that Bundrage and Daniels were close to seeing the field last year. Also keep an eye out for former quarterback Jerome Tiller (11) and Ben Dinkins (88) in the red zone. Both are lankier receivers that are capable of catching the ball away from their body in end zone situations.

New Running Backs: Running backs coach Kenith Pope has done an excellent job of hyping DeVondrick Nealy and Robert Standard this spring. Both are coming off redshirt seasons, and it's easy to see the appeal. Both were highly recruited out of high school, both bring an elite skill set to ISU, and both are new. And never underestimate the appeal of newness. Newness is what gets fans excited about signing day; the unknown quantity is always more exciting than the known quantity (it's why people picked what was hidden behind the door on Let's Make a Deal). So watch to see how many carries Nealy and Standard get and what they do with those carries. If either one has a big game (or even just a big run), expect the hype machine to keep rolling. Ideally one will step up and serve as a suitable, do-it-all replacement for Shontrelle Johnson.

Ernst Brun's Development: Actually, just look for ANY kind of tight end play. After Collin Franklin took his talents to the NFL after the 2010 season, Iowa State struggled to fill the void he left at TE last year. Fortunately, another JUCO TE in the Franklin mold will eligible next season. Ernst Brun has been making some noise during spring practice, and definitely looks the part at 6'3" and 240 lbs. Watch Brun, Ricky Howard, Pierce Richardson and Kurt Hammerschmidt's blocking and route running. Hopefully one of the four will be able to match the TE production of 2010, and not have another repeat of 2011.

Why You Should Go: Get an early look at the 2012 football team, pick up the new poster and a new t-shirt from Cy's Locker Room, and drink a beer or two in the stadium lot in 70-degree weather. What other excuse do you need?