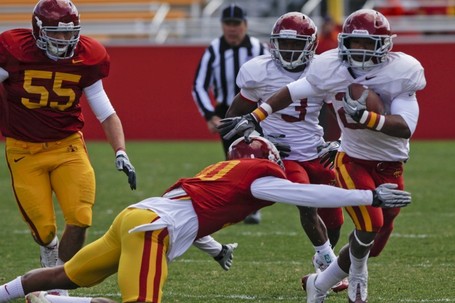 With the spring game fast approaching, it's time to start thinking about the 2012 edition of the Iowa State football team. Specifically, the defense. Next year's defense has the chance to be good. Like, upper-half of the Big XII-good. That's not much, but it would be better than any Iowa State defensive unit since 2005. Since his arrival in Ames three years ago, Wally Burnham has consistently made chicken salad out of chicken shit, but until now he hasn't really had the talent or depth to coach a fully-functional defense. He's always had to choose one area of the opposing team to shut down, and take his chances

But next year could be different. The 2012 Cyclone defense will have more talent and depth than it has had since Dan McCarney left Iowa State, and the first chance to see how the unit will mesh will be this Saturday at the spring game. So let's take a look at what to look for on defense during the spring game.

Young Linebackers: Iowa State has kinda done a terrible job of recruiting and retaining linebackers during Rhoads' tenure. The exceptional play of Jake Knott and A.J. Klein has helped put a bandaid on the problem, but the fact remains that out of the nine high school linebackers to sign with Iowa State from '09-'11, only five remain on the team. This doesn't even take into account the three linebackers who committed to ISU but backed out of their commitment before signing their letter of intent.

So the Cyclones desperately need to find some young talent to replace Knott and Klein after they depart next year. Iowa State definitely improved their position with this recruiting class, signing three high school linebackers, but none have participated in spring practice. Since Jake Knott will be held out of the spring game for rehab, watch to see how the backups play. Jeremiah George (52), Jevohn Miller (55) and C.J. Morgan (27) are the future.

LJ & TB replacements: The Cyclone defense loses two key components now that Leonard Johnson and Ter'ran Benton are gone, but overall the secondary could be better in 2012. That's due to the increased depth that Iowa State will have at cornerback and safety in 2012. In his press conference this week, Paul Rhoads said "I think overall, when I say that just because of depth and numbers, we can be a better secondary in 2012 than we were in 2011 because of the numbers. Anytime you can run four corners out there on the field or multiple safeties or keep guys fresher, you've got a chance to play better."

That seems like common sense, but again, this type of depth has been rare for Iowa State lately. Watch to see how Durrell Givens (24) is transitioning to his new role at strong safety, and how game ready redshirt freshmen Darian Cotton (23), Kenneth Lynn (3) and Sam Richardson (not that one, (4)). Also check out how JUCO transfers TJ Mutcherson (22) and Clifford Stokes (7) are playing. They may be able to contribute this fall.

Troy Douglas' Impact: Troy Douglas arrives from the wreckage of Butch Davis' North Carolina team just in time to replace departed DB coach Bobby Elliot. Granted, Douglas was only hired a little less than two months ago, so he hasn't had much time to make his impact on the cornerback and safety positions; but it will be interesting to see his demeanor on the sideline. Rhoads values coaches who are able to teach the game and communicate well with players, and with over 20 years of college football experience, Douglas should be a valuable addition.

Defensive Line Development: As with almost every other position, Iowa State's defensive line will have more depth and talent next year than any previous unit at Iowa State, with eight scholarship players able to rotate in and out at defensive end and five scholarship players at defensive tackle. This is a little different than last year, when Rhoads was basically forced to play David Irving (87) as a freshman after Roosevelt Maggitt (38) went down with a knee injury.

But that experience last year could prove valuable for Irving, considering he's basically a 6'7" man-child who could start ripping arms off O-Linemen at any minute once he actually learns how to play his position. Last year Irving relied on pure athleticism to get by, and while it was fun to see him jumping three feet higher than everyone else in kick-blocking situations, once he improves his technique and learns how to get off the line more quickly he'll be a force. Watch to see how much Rony Nelson (31), Willie Scott (50) and Henry Simon (98) have continued to improve from last year. Also look for JUCO newcomer Cory Morrissey (48) and redshirt freshman Quinton Pompey (99) as they might be able to contribute this fall.

Why You Should Go: Get an early look at the 2012 football team, pick up the new poster and a new t-shirt from Cy's Locker Room, and drink a beer or two in the stadium lot in 70-degree weather. What other excuse do you need?